Accessibility links
Army Offers GED Help In Exchange For Service A pilot program at the Army's Fort Jackson near Columbia, S.C., is giving high school dropouts a chance to earn their GEDs for free if they enlist. The Army hopes this program will keep their recruitment numbers steady as the wars overseas continue. 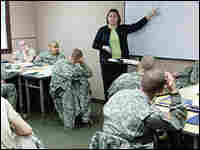 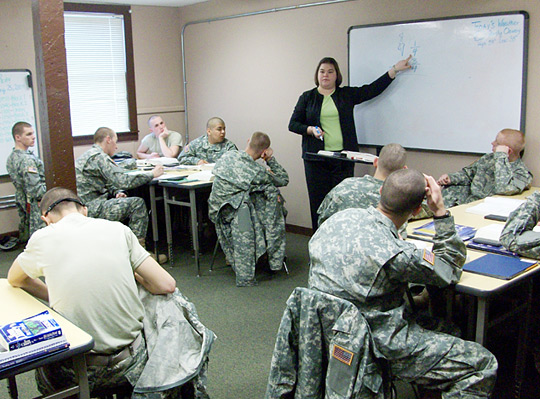 A pilot program at the Army's Fort Jackson near Columbia, S.C., is offering high school dropouts a chance to earn their GEDs for free — in exchange for their service. The Army hopes this program will keep its enlistment numbers steady as the wars overseas continue.

After dropping out of high school, William Kamicka, now 28, wanted to join the military, but his family talked him out of it. So the Columbiaville, Mich., native got a job. He eventually found work at a gift shop where he met his wife. They got married, and now they have four kids. Kamicka says having a family made it hard for him to get his GED.

"I'd eat up any overtime I could get my hands on, just to get that extra dollar, so that interfered with my GED classes," Kamicka says. "I never really got to finish."

Then a few months ago, as Michigan's economy tanked, Kamicka and his wife lost their jobs. He went on unemployment and searched for a new job, but without a diploma, he couldn't even find work at a fast-food restaurant. So he tried to join the military — but officials there, too, were looking for a high school diploma.

"The Navy, Air Force and Marines wouldn't accept me," Kamicka recalls. "The Army had said, 'We'll pay for your GED — you get it and then you can come join.'"

The Army's new preparatory school at Fort Jackson made that possible. Since its creation last August, the school has helped more than 1,000 recruits earn their GEDs.

Just Weeks To A GED

Along with classroom instruction, these recruits also get a taste of the rigors of Army life.

Every morning, before sunrise, these new soldiers exercise on a campus about the size of a city block. The rest of the day, they're in class.

Capt. Brian Gaddis, the commanding officer of the school, says three things will keep you out of the Army: physical limitations, a criminal history or an incomplete high school education.

Gaddis says nearly all students, who range in age from 17 to 41, pass the GED within six weeks. He credits the high success rate to discipline and the removal of distractions. Gaddis says 10 percent of the students tried to get a GED before they joined.

"Many of them weren't able to complete it because they weren't able to devote time to it — due to needing to pay bills or family issues," he says. "So what we do here, we take all the distracters away."

A Lure For Low-Income Youth?

Not everybody thinks going to the Army for a free GED is the way to go. Arlene Inouye, who runs the Los Angeles-based Coalition Against Militarism in Our Schools, says the Army is luring vulnerable, often low-income people into dangerous combat situations with the promise of a free education.

"They look like the savior and white knight coming to rescue them," Inouye says, "but in reality, they're using these young people to get their bodies."

But Gaddis says not all of the students are from low-income families, and not every soldier will see combat. He says every soldier does receive great health benefits, steady pay and tuition assistance that many couldn't find in the civilian world.

"The Army does need what it needs from you," he says, "but it gives you so much back in return that it's almost criminal to call it exploitive."

At one of the weekly graduation ceremonies, 57 graduates shake hands with Gaddis and other school commanders. Pvt. Kamicka passed the GED exam after less than two weeks of classes. Now he'll be sent to basic training, making room for the next new student soldier.