Accessibility links
Sacramento Tent City Reflects Economy's Troubles Job losses, foreclosures and a deepening recession are sending newly homeless people into a makeshift camp on the northern edge of California's capital. Some 300-400 people live there, with no running water and little protection against the elements. 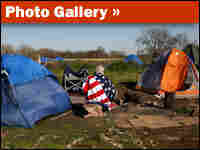 Job losses, home foreclosures and a deepening recession are sending scores of newly homeless people into a makeshift camp along the banks of the American River in Sacramento, Calif.

The tent city, spread over an area the size of several football fields, has local officials scrambling over how to handle the area's homeless crisis.

More than a year ago, a handful of homeless people staked out the site on the northern edge of downtown Sacramento. Now there are more than 100 tents and anywhere between 300 to 400 people living without running water or sanitation. Their only protection from the elements is nylon tents and plastic tarps.

A single mid-day meal is available at a nearby faith-based charity called Loaves and Fishes. That's where social worker Jim Peth says he's seeing a lot of the newly homeless.

"That's been very recent," Peth says. "And you can tell because they're much better dressed. They're disoriented; they don't know where to go. So they're easy to spot."

Take, for example, 53-year-old Dave Cutch. His clothes suggest a suburban hiker, except that he stands in a muddy patch outside a tent that he's called home for the past two months. A year ago, he was a welder in Colorado.

"So the company I'm working for, I get laid off," Cutch says. "I qualified for unemployment — 24 weeks. My car's paid off, my truck's paid off, my bike's paid off, everything except for my house payment, right? But I feel like I'm still going to pull out of it."

Months went by without work. Cutch lost his house, his car was stolen, his savings ran out. This past August, he took up a friend's invitation to come to California, but that didn't work out, either.

"Trying to get back on my feet, you know," Cutch says. "Daily, I still go out looking for a job. But the thing I'm running into is when I put the application in they ask me, 'Where do you live at?' And I go, 'Actually, I don't have a place to live. I'm homeless.' That's it. They don't hire me."

Tent cities have sprung up in other locations, including Portland and Phoenix. But the one in Sacramento is drawing national attention, much to the chagrin of city leaders. Mayor Kevin Johnson says he can foresee making the tent city permanent, but not on its current site.

"We need tough love, meaning we have to be compassionate to this population," Johnson says. "I am very committed to it; I feel we have a moral obligation."

At the same time, though, Johnson says the city must eventually adopt a "zero tolerance" approach to the river-side campsite. "It can't happen tomorrow, though," he says.