Accessibility links
In the Age of TiVo, Advertisers Scramble to Keep Up If you missed your favorite TV show last night, maybe you'll watch it later on a DVR — and fast-forward through the commercials. That's one of the challenges advertisers are trying to overcome as they decide whether it's still worth their while to spend money on 30 seconds of network airtime.

Listen
In the Age of TiVo, Advertisers Scramble to Keep Up 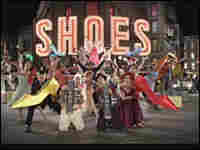 Four endings, two each aimed at men and women.

Ramesh Thadani is a 33-year-old writer and producer in Los Angeles. He spends long hours at work, but thanks to his DVR, his favorite shows are waiting when he's ready to relax. He watches House, Lost and The Office — but not a lot of pitches for fast food and cars.

"I just fast-forward right through, and it's a little tricky, because you have to sort of time it out," Thadani says. "But if you do it right, you'll actually skip all the commercials."

Thadani still likes to watch sports programs as they're broadcast, and sometimes he just channel-surfs. But most of the time, he watches recorded shows.

Josh Bernoff, an analyst with Forrester Research, says Thadani is part of a trend that will make itself felt when the networks try to sell commercial time this year.

"I think 2007 is the first year that the upfront will be significantly down as a result of digital video recorders and weaknesses in TV," Bernoff predicts.

In a study last year, Forrester found that 60 percent of national advertisers were planning to cut back on television ad spending, at least in part because of concern about DVRs. That didn't make itself felt much at last year's upfronts; the networks still did about $9 billion worth of business. And if the day of reckoning is at hand because of the DVR, Bill Morningstar is not quite ready to say so. Morningstar, a top sales executive with the CW broadcast network, points out that the DVR hasn't caught on nearly as fast as projected since they were introduced in 1999.

Bernoff admits that Forrester expected DVRs to take off faster than they did.

"But taken as a whole, the digital video recorders are clearly off and running now," he says. "It was complicated to explain what they did, but people have figured it out now, and they know they want one."

Bernoff says DVRs will be in 20 percent of homes this year — and in more than 50 percent by 2010. Advertisers are already trying to design commercials that circumvent the technology; so far, they've had limited success.

"It's very difficult to create an ad that can communicate its message when fast-forwarded at 10 times normal speed," Bernoff says.

Still, even Bernoff admits that the end of the 30-second spot may not be that near. More and more people are watching recorded shows, but a Nielsen report found that DVR owners still sit through two-thirds of the ads that aired on television. Many viewed a lot of programs as they were being broadcast, so they couldn't skip ahead. And even when they watched recorded shows, DVR owners sat through 40 percent of commercials that they could have skipped. Thadani acknowledges that he's done that himself.

Bernoff's research showed that even those DVR owners who said they skipped more than 90 percent of the commercials actually watched many more ads than they realized. Still, Bernoff says, advertisers shouldn't draw much comfort from those numbers.

"The fact is that with digital video recorders, ads are being tuned out more than ever before," Bernoff says. "And even without, the total amount of clutter and advertising is numbing people to the point where the impressions that [advertisers] do get are diluted, compared to what they might have gotten in the past."

These trends aren't too big a problem for shows that still fulfill the promise of aggregating eyeballs, like American Idol, which viewers tend to watch as it is being broadcast. But most shows are vulnerable. The challenge for advertisers is to keep viewers watching even if they have the power to fast-forward. And several are trying to figure out how.

Clairol, for example, teamed up with the CW network to create little shows within a show. In one series that aired during America's Top Model, these two-minute breaks covered everything from styling tips to gossip, with the products always lurking:

"This season it is all about bangs, but it's how you style them that makes them current," one spot proclaimed. "Sideswept bangs, hot. Single-length wispy bangs, not. Herbal Essence's new Set Me Up collection, with hairsprays, gels and mousse, puts you in control of your style."

According to the CW, the approach was a hit. The network plans a dramatic expansion of the concept with a dozen different advertisers — and even developed a pilot of a TV show based around the concept, though it's not clear whether that program will find a place on the fall schedule. ABC is now considering similar experiments to draw viewers into commercials.

And advertisers are looking for other ways to work around DVRs. Sony figured potential buyers for its flat-screen TVs would probably own digital recorders, so it designed ads that allowed viewers to select from four different endings — a couple meant for men and a couple aimed at women. (The one that morphs into a Broadway-style musical about shoes? That's apparently for the women.)

Brad Brinegar is with the McKinney ad agency, which created the campaign. He says Sony won't let him reveal the impact of the campaign, but he calls it a success. And it's no accident that the ad directs viewers to the Internet: These days, Brinegar's agency is hardly the only one to see television spots simply as part of a larger whole.

Disney recently bought a 90-second spot on American Idol hoping to sell its upcoming animated film Ratatouille. The ad reached the biggest audience in television but the studio wanted more exposure than it would be able to buy on the show — so it encouraged Idol audiences to "Log on to Disney.com to see nine minutes of this summer's most original comedy."

For advertisers, it seems, the Internet is becoming a very powerful tail wagging the broadcast television dog. But Brinegar is one of many who think traditional television commercials will last for years to come, not just because they reach a lot of eyeballs but because they provide a unique experience.

"TV is still the most cost-effective way to touch the most emotions in a person, with sight, sound, motion," he says. "The only thing that's missing is smell, and Lord knows somebody's going to figure that out in a few years."

Still, it seems increasingly risky to guess what the future will bring — and when it will bring it. Earlier this year, Microsoft chairman Bill Gates told the World Economic Forum in Davos that dramatic changes will come within five years as television and the Internet converge. But Bernoff, the Forrester analyst, thinks Gates is getting ahead of the technology.

"When TV and the Internet merge into one box, I'll be dead," Bernoff says.

Bernoff may not be able to say exactly when either event will transpire — but clearly he expects it to be more than five years from now.