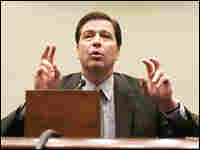 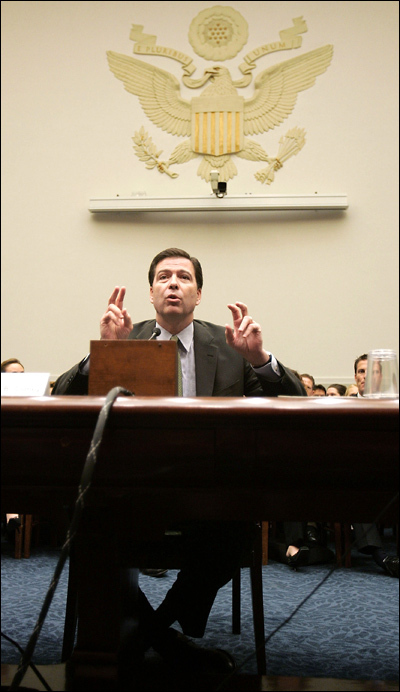 James Comey testifies during the House Judiciary Committee's hearing on reauthorization of the PATRIOT Act on June 8, 2005.

Leaders at the White House and the Department of Justice clashed long before last year's dismissal of U.S. attorneys, according to former Deputy Attorney General James Comey.

Comey, who worked under John Ashcroft in President Bush's first administration, testified before the Senate Judiciary Committee about the firings of U.S. attorneys and the alleged politicization of the Justice Department.

One senator called it some of the most dramatic testimony he's heard in 25 years as a legislator.

Comey was the only witness at a Senate Judiciary Committee hearing, where for the first time, he publicly told the story of a dramatic confrontation at a hospital bedside between some of the most powerful men in Washington.

"I thought I had just witnessed an effort to take advantage of a very sick man, who did not have the powers of the attorney general because they had been transferred to me," Comey testified.

The sick man was John Ashcroft, who was in the hospital with acute pancreatitis. Hours before his hospitalization, Ashcroft and Comey had decided not to reauthorize the president's secret, controversial, domestic-surveillance program.

The night after the Justice Department told the White House, Comey received a phone call. The president's chief of staff, Andy Card, and then-White House counsel Alberto Gonzales were on their way to Ashcroft's hospital room.

"I told my security detail that I needed to get to George Washington Hospital immediately," Comey testified. "They turned on the emergency equipment and drove very quickly to the hospital. I got out of the car and literally ran up the stairs."

The room was dark. Mrs. Ashcroft was standing by the bed. Comey said that Ashcroft, in his sixth day in intensive care, was not in good shape. He was unfocused, disoriented.

"And it was only a matter of minutes that the door opened and in walked Mr. Gonzales, carrying an envelope, and Mr. Card," Comey said. "They came over and stood by the bed, greeted the attorney general very briefly, and then Mr. Gonzales began to discuss why they were there — to seek his approval for a matter."

Then, Ashcroft did something that stunned Comey. He lifted his head off the pillow and explained in strong, detailed terms why he would not sign the paper.

"And as he laid back down, he said, 'But that doesn't matter because I'm not the attorney general. There is the attorney general.' And he pointed to me," Comey testified. "I was just to his left. The two men did not acknowledge me. They turned and walked from the room."

That was not the end of it. Before Comey left the hospital, he received an urgent call from White House Chief of Staff Andy Card.

"Mr. Card was very upset and demanded that I come to the White House immediately," Come said. "I responded that after the conduct I had just witnessed, I would not meet with him without a witness present. He replied, 'What conduct? We were just there to wish him well.'"

Comey eventually went to the White House, accompanied by Solicitor General Ted Olsen. The two sides could not agree about the domestic-surveillance program. The rules required the attorney general to sign off on it at regular intervals, but Comey would not. So the next morning, the White House authorized the program without the Justice Department. Comey drafted a resignation letter.

"I couldn't stay if the administration was going to engage in conduct that the Department of Justice has said had no legal basis," Comey said.

Comey said several others at the Justice Department were planning to resign as well. NPR contacted FBI Director Robert Mueller, former Solicitor General Ted Olsen, and Jack Goldsmith, who used to run the office of legal counsel. All declined to dispute Comey's testimony. None of them resigned that day.

"Mr. Ashcroft's chief of staff asked me something that meant a great deal to him, and that is that I not resign until Mr. Ashcroft was well enough to resign with me," Comey said.

He said the chief of staff was prepared to resign too and didn't want Ashcroft to be left behind. The next morning, Comey and FBI Director Robert Mueller each met with President Bush in private.

"Then Director Mueller came to me and said that, 'The president told me that the Department of Justice should get this where it wants to be — to do what the department thinks is right.' And I took that mandate and set about to do that, and I accomplished that."

The Justice Department changed the spying program until officials there were satisfied that it was legal.

The White House on Tuesday refused to talk about internal deliberations.

After Comey had told his story, the Senate Judiciary Committee's top Republican, Arlen Specter of Pennsylvania, commended him for doing the right thing. And, he said, the president did the right thing, too.

But Specter had harsher words for Alberto Gonzales, who was promoted from White House counsel to Attorney General in 2005.

"The department really cannot function with the continued leadership, or lack of leadership, of Attorney General Gonzales," Specter said.

When Comey resigned in 2005, he delivered a goodbye speech in which he said that some people at the Justice Department paid a price for their commitment to doing what's right. On Tuesday, Sen. Russ Feingold (D-WI) asked Comey, "What were you referring to?"

"I had in mind one particular senior staffer of mine who had been in the hospital room with me and had been blocked from promotion, I believed as a result of this particular matter," Comey said.

He said the staffer, Patrick Philbin, was the associate deputy attorney general, and widely considered to be a likely choice for solicitor general in President Bush's second term. Instead, he resigned from the Justice Department and entered private practice.