Accessibility links
Even a Little Exercise Boosts Fitness, Study Shows New research shows that even small amounts of physical activity can improve fitness. The study compared four groups of women ages 50 and older. The women who exercised most were the most fit — but even women who began exercising just 70 minutes a week saw a boost in fitness. 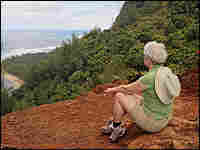 New research shows that even a small amount of exercise can improve physical fitness in women. iStockPhoto.com hide caption

It's a common excuse for skipping exercise: "I don't have time!" Yet new research shows that taking just three, 25-minute walks per week is enough to improve fitness.

Jean Pearman, 74, a retired teacher who lives in Washington, D.C., walked everywhere as a child.

She walked to school, to church, to the movies. "It was part of my life," Pearman says.

But in recent years, Pearman says she's struggled to make time for any exercise. And she's not clear how much of what sorts of exercise are most helpful; she has heard too many different recommendations.

"I hear this all the time," says Dr. Tim Church, who directs the Preventive Medicine Research Lab at the Pennington Biomedical Research Center at Louisiana State University in Baton Rouge, La. People want to become physically active, says Church, but they have no idea where to start.

Church's latest exercise study included 500 women ages 45 to 75. Many of the women were retired teachers. All of them had become overweight and were living sedentary lives.

Church says many of these women didn't know that the No. 1 cause of death in women is cardiovascular disease.

"And once you reach menopause, your risk of cardiovascular disease skyrockets."

One way to reduce the risk of cardiovascular disease is to exercise regularly. A lot of studies have shown this. But Church wanted to determine exactly how much — or how little — exercise is enough to protect older women who have not yet made physical activity a priority.

To answer this question, Church divided his volunteers into groups. Some women were instructed to walk on a treadmill three times a week for about 25 minutes at a time.

Other women were instructed to ride a stationary bike or treadmill for three hours per week.

All of the women wore heart-rate monitors and were instructed to keep their workouts to a modest intensity. The target training intensity was 50 percent of each woman's peak aerobic capacity.

"We were surprised when we found out that the 71 minutes a week not only prevented a loss of fitness," Church says, "but it actually resulted in an increase in fitness."

At the end of the six-month study, none of the women lost weight or saw a drop in blood pressure. But the main benefit was important: All of the women had improved their aerobic fitness; they were able to move a little longer and faster without becoming winded.

"Aerobic fitness alone is a key predictor of longevity," says Glenn Gaesser, an exercise physiologist at the University of Virginia. It doesn't matter whether the individual loses weight or if they have other risk factors associated with disease, Gaesser says.

Increasing fitness just a little bit, he says, "reduces the chances of dropping dead of a heart attack."

Church's study also found that the more exercise women did, the better off they were in terms of fitness. Women who biked or walked on treadmills for 3 hours per week ended up about twice as fit as those who exercised for just 71 minutes a week.

This study shows people don't have to exercise a lot to start seeing some benefits, says I-Min Lee, a professor of medicine at Brigham and Women's Hospital in Boston.

"But if you want to control your weight, given what we eat in a typical American diet," says Lee, "you might need 60 or even 90 minutes of physical exercise a day."

"You're lighter, your attitude is different, also," Pearman says. "You have a tremendous attitude!"