Accessibility links
Abuse At Texas Institutions Is Beyond 'Fight Club' Six workers at the Corpus Christi State School in Texas have been charged with taking part in staging what amounted to human cockfights --using residents with mental retardation. More than 450 cases of abuse have been reported at state institutions in Texas over the previous year.

Listen
Abuse At Texas Institutions Is Beyond 'Fight Club' 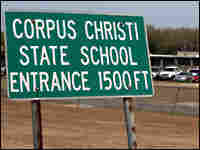 Six staff members at Corpus Christi State School in Texas have been charged with staging a late-night "fight-club" using residents with mental retardation. The abuse was discovered accidentally, when one of the workers lost his cell phone, which contained videos of more than a year of the fights.

At a state institution for people with mental retardation in Texas, six staff members have been charged with taking part in staging what have been called human cockfights, using residents with mental retardation. The accusations have raised questions about how workers trained and hired to care for some of the most vulnerable people in society could instead treat them with cruelty.

The fights became known only because one of the workers lost his cell phone. It was found and turned over to an off-duty police officer. The phone had videos of more than a year of staged late-night fights, some as recent as this past January.

Corpus Christi Police Capt. Tim Wilson says the videos showed a "lot of pushing, shoving and (in) several of the videos, there were punches thrown, and in one video we have a worker kicking one of the clients."

Wilson says one staffer narrated the fights, and those involved can be seen clearly on the videos.

"I'm pretty appalled. I mean, these workers are supposed to be caring for these people, and here they are exploiting them for their own entertainment," Wilson says.

He says the youngest residents with disabilities appeared to be in their late teens or early 20s, and the oldest in their 40s. "These are severely mentally challenged adults," says Wilson. Several were hurt or bruised, although none apparently required hospitalization.

In response, Texas state officials announced steps last week to prevent more abuse, including adding supervisors to evening shifts and installing security cameras in public areas at all 13 state institutions for people with intellectual disabilities. "We will continue to take swift and immediate action when abuse and neglect is reported," Addie Horn, who runs the Texas Department of Aging and Disability Services, pledged in a letter to the public last week.

Four of the workers accused of abuse at Corpus Christi were fired. The other two had already quit. Attempts by NPR to contact them were unsuccessful.

A History Of Abuse

Still, there's been a long, recent history of abuse at Texas institutions. Just last Friday, a 53-year-old woman died of a head injury after being hit by another resident in a hallway collision at a facility in Denton. State officials say it was an accident. A county coroner ruled it a homicide.

Last year, the U.S. Department of Justice investigated abuse at Texas institutions. Now, it's negotiating with the state to increase staff and make other changes. The Justice Department found there had been 450 cases of abuse over just the previous year. And in four years, more than 800 state employees had been suspended or fired.

Beth Mitchell, an attorney at Advocacy Inc., a state legal group set up by Congress to protect people with disabilities, says one problem is that staffers get little training and often work in isolated areas. "These are large institutions that are in rural areas. The staff only need a GED or high school education. They get paid extremely minimum wages — $22,000 a year — and they don't get much training," she says.

Mitchell's law center has been pressuring Texas officials to move residents out of the institutions and into smaller group homes.

She thinks there's something about the impersonal nature of large institutions that breeds abuse.

Researcher Dick Sobsey, who studies violence against people with disabilities at the University of Alberta in Canada, agrees. "There's really sometimes peer pressure for people to engage in abuse," says Sobsey. Although many good, caring people come to work at institutions, he says some cruel ones come, too. And they can sort of infect other workers.

Sobsey says this is more likely to go on at facilities that are in out-of-the-way places or out of the public eye. In Corpus Christi, the alleged abuse was on the late-night shift, when staff levels were low.

Sobsey says one way to reduce abuse is to make institutions smaller and link them to communities such as families and churches. That way, they're less isolated and more people are watching.