Accessibility links
Study: Kids Often Misdiagnosed With Food Allergies A recent study found that 50 percent of kids with allergies and excema could tolerate foods they had been told to avoid. Researchers say the only way to know if a child is actually allergic to a food is to have him eat it under a doctor's supervision. 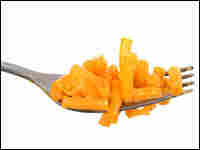 Three-year-old Jack Littauer was diagnosed with a range of food allergies after an allergic reaction to creamed spinach sent him to the ER. But during a food test, the Littauers learned that Jack was free to eat wheat-based products like macaroni. iStockphoto.com hide caption

Many children with allergies and eczema are often misdiagnosed as having food allergies, according to a study presented at the American Academy of Allergy, Asthma and Immunology conference in Washington, D.C.

Researchers at National Jewish Health in Denver conducted "food challenge" tests on 125 children with allergies and eczema and found that more than 50 percent of the kids could tolerate foods they had been told to avoid.

Christy Littauer and her family live in Henderson, Nev. Her 3-year-old son, Jack, had an allergic reaction to creamed spinach when he was 6 months old.

"We ended up going to the ER and then to an allergist, and he was diagnosed to have a strong allergy to dairy, eggs, wheat and peanuts," Littauer recalls.

The Littauers decided to travel to Denver for a full evaluation at National Jewish Health. "We really needed to get a handle on what was going on with Jack," says Littauer.

"He'd never had wheat in three years of life," says Littauer. She knew life would be much easier if he could eat bread and crackers, and she says her family was spending lots of money on wheat-free substitutes.

In addition to skin testing, specialists at National Jewish did what they call a "food challenge" test.

Under direct supervision of a doctor, Jack ate wheat-based foods during the food challenge. "Lo and behold, he did not have a reaction" says Littauer. "It was like the skies parted, and we said, 'We can give him wheat! This is amazing,' " she remembers.

"The only true test of whether you're allergic to a food is whether you can eat that food," says Dr. David Fleischer.

Fleischer, an assistant professor at National Jewish Health, says blood tests alone can only give you an idea that you may have a food allergy, but "it doesn't mean you're actually allergic."

Allergy blood tests measure the blood level of a type of antibody called immunoglobulin E (or IgE, for short) that the body may make in response to allergens.

Allergists also use skin-prick tests. During this test, a series of needle pricks are used to deliver a small amount of solution containing potential allergens to the skin. If the skin becomes itchy, it means the person is likely to be allergic to the allergen.

No one test gives the full picture, so many allergists recommend the full combination: blood tests, skin tests, food challenges and talking to patients about the kind of reactions they've had.

"The food challenge is a necessary part of the process" says Dr. Richard Hendershot, an allergist in Salt Lake City, Utah.

Many insurance plans cover the cost of food challenge tests, which run in the hundreds of dollars.