Accessibility links
Movie Review - 'Sin Nombre': Danger And Friendship, En Route To North America Sin Nombre has a first-time director, actors you've never heard of, Spanish dialogue and a story about illegal immigration. Somehow all that adds up to a surprisingly striking movie. 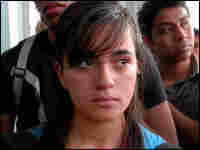 'Ever Been On One of Those?'

'I'm Going With You' 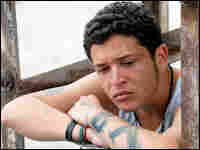 El Casper, played by Edgar Flores, is on the run from gang members with a grudge. Eniac Martinez/Focus Features hide caption

El Casper, played by Edgar Flores, is on the run from gang members with a grudge.

The new movie Sin Nombre has a first-time director, actors you've never heard of, Spanish dialogue and a storyline about illegal immigration.

That may not sound like a recipe for success. But while the title means "nameless" in Spanish, audiences will want to remember the names of everyone associated with it.

Start with Cary Fukunaga, a young director from California, whose connection to Central America is tenuous — though you'd never guess that as his camera plunges into a world of Mexican street gangs. Fukunaga captures the hulking thugs of the MS-13 gang in Chiapas in such detail that you'd almost think you were watching a documentary.

Their faces are all but obscured by enormous tattoos, their lives filled with violence that often turns deadly — never more so than when a 12-year-old named Smiley is inducted into the gang. First he is beaten, then shot at and finally made executioner of a rival gang member.

Smiley is guided through these rituals by El Casper, who's just a few years older. If Casper looks slightly more soulful than most of the thugs he hangs with, it's only because he has a teardrop tattoo at the corner of one eye. But he does seem to have qualms about the collective viciousness that has him on a fast track to the cemetery.

That ride gets faster when he angrily betrays the gang during a robbery of some U.S.-bound emigres who are riding atop a freight train. Knowing the gang will come after him, he later hops off the train, only to discover as it pulls away that one of the emigres has hopped off behind him.

She's a pretty teenager he's rescued from rape, and now — supremely foolishly — she's decided she feels safe only around him. Casper watches the train pull away, realizing that the girl is helpless, and he's the reason.

If this plot development sounds a little too Hollywood, well ... it kind of is. But everything leading up to and following it feels so authentic that you can forgive the filmmaker a minor lapse.

Although Fukunaga worked in both writing and directing labs at the Sundance Institute, Sin Nombre almost never feels workshopped or overly planned. The acting — largely by first-time performers — is natural and unforced. The images — whether urgent and urban or sunset-strewn and caught from a moving train — are haunting.

And if Sin Nombre doesn't have anything terribly new to say about the illegal immigrants who are its subject or the desperate trek they're making from one dicey, uncertain future to another, its depiction of that trek is pretty vibrant moviemaking.