Accessibility links
A Duck-Walking Rock Legend Gets the 'Blues' Even a ubiquitous figure like Chuck Berry has neglected gems gathering spiderwebs in remote corners of his catalog. Blues helps fill in a bit of his legend, showing how he transferred devices used by generations of blues guitarists into the then-new rebellion of rock.

A Duck-Walking Rock Legend Gets the 'Blues'

A Duck-Walking Rock Legend Gets the 'Blues' 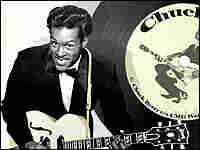 As iconic as he is, Chuck Berry has a few neglected gems in remote corners of his catalog. hide caption 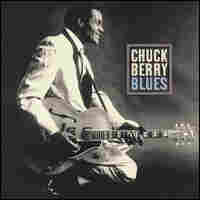 In a sense, all of rock 'n' roll is linked to the blues. But some, following Chuck Berry's example, have been able to celebrate — and extend — that link. What are some other recorded examples?

Even a ubiquitous figure like Chuck Berry has neglected gems gathering spiderwebs in remote corners of his catalog. The duck-walking legend, who developed the basic vocabulary of rock guitar, began his career at Chicago's Chess Records, in the company of B.B. King, Willie Dixon and countless other ferocious blues musicians. From his very first sessions, Berry would do more than just high-octane jumps like "Maybelline" and "Johnny B. Goode" — the B-sides of his singles were often slow, weepy blues numbers. This compilation gathers highlights from Berry's blues endeavors, including a showcase for his fervent guitar, the aptly named instrumental "Deep Feeling" (audio). Blues helps fill in a bit of the Berry legend, showing how this prodigiously talented musician transferred devices used by generations of blues guitarists into the then-new rebellion of rock.

Berry wasn't a go-for-the-gut blues singer like King or Howlin' Wolf. His vocals are slicker and more urbane, with traces of Charles Brown and irreverent hipster jive. But as his lumbering original "Wee Wee Hours" (audio) demonstrates, Berry doesn't have to bellow to summon that old-timer's authority. It comes naturally as he rolls along, singing with a compelling last-set weariness. He sounds like he grew up in nightclubs.

Of course, Berry gets help. Chief Chess songwriter Dixon plays bass on many of these sessions, and though Leonard and Phil Chess are credited with production, it's likely that Dixon had a hand in shaping the lively sound. And these tracks sparkle in part because of the presence of pianist Johnnie Johnson, whose wildcat chordal riffing in the top two octaves of the piano gives the music a fitful, not-quite-settled quality. Listen to the way these two operate on the cover of Big Maceo's "Worried Life Blues" (audio): Johnson's steady-handed chords set things up, allowing Berry to lash out with severe blues rejoinders between his vocal lines. The tempo is slower and the mood is different, but it's the same type of steam-train locomotion that makes "Roll Over Beethoven" unstoppable.