Accessibility links
Outrage Over AIG Politically Tricky For Obama The ferocity of the backlash against bonuses paid out to executives at AIG appeared to have the potential to erode President Obama's good standing with the American people. But it also presents him with an opportunity to tighten banking regulations. 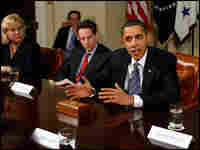 From left: Sen. Mary Landrieu (D-LA), Treasury Secretary Timothy Geithner and President Obama meet with members of Congress and small-business leaders at the White House Monday. The president announced that he has asked Geithner to use all legal tools to block executives at AIG from receiving bonuses. Martin H. Simon/Pool/Getty Images hide caption 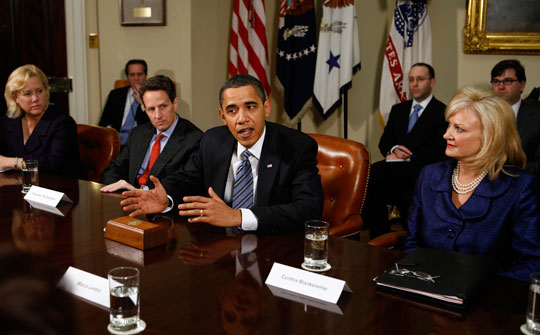 From left: Sen. Mary Landrieu (D-LA), Treasury Secretary Timothy Geithner, President Obama and Cynthia Blankenship, co-founder of Bank of the West, meet with members of Congress and small-business leaders at the White House Monday. The president announced that he has asked Geithner to use all legal tools to block executives at AIG from receiving bonuses.

Reaction was swift and visceral to the weekend news that insurance giant American International Group — a major government bailout beneficiary — paid out $165 million in employee bonuses.

Furious American taxpayers, struggling through the worst recession in decades, flooded congressional phone lines and filled chat rooms with "this is the last straw" righteous indignation.

And that was before the company revealed that it also sent billions in bailout money to foreign banks.

The ferocity of the AIG backlash — more than any event to date — appeared to have the potential to erode the president's good standing with the American people.

"This is a debit on the Obama administration," said Ruy Teixeira, a liberal thinker and author who studies political demographics. "But people generally feel that he's trying hard, and this — while it doesn't help — is unlikely to undermine that."

Mark Blumenthal of Pollster.com adds, "This has hit a nerve with Americans. And there's already quite a bit of survey results showing that Americans are highly distrustful of banks and of government doing too much for large banks and financial institutions."

Blumenthal, however, is among those who believe that in the brouhaha, the president could well find an opportunity to tighten banking regulations.

"The climate and this backlash have Americans ready to have their government increase their regulations," he says.

Obama on Monday channeled some of the national outrage over AIG and the seemingly endless bailout of banks to advance his policy plans for more vigorous Wall Street regulation.

"What this situation also underscores is the need for overall financial regulatory reform, so we don't find ourselves in this position again," Obama said, addressing a gathering of small business leaders at the White House.

In a rapid and strategic move to tamp down the fallout, Obama also announced Monday that he has instructed Treasury Secretary Timothy Geithner to "pursue every legal avenue to block these bonuses and make the American taxpayers whole." Geithner last week had already confronted AIG chief Edward Liddy about the payouts. Liddy is expected to testify at a congressional hearing Wednesday on the bailout.

Experts say that the path to preventing the contractual bonuses is logistically and legally fraught — if not impossible — even though leaders on Capitol Hill are calling for the company to renegotiate the bonus agreements.

Because the agreements were made before the government bailout, they say it would very likely take nothing short of some moral enlightenment at AIG to keep the money in the bank, so to speak. (New York Attorney General Andrew Cuomo Monday tried to encourage that enlightenment, demanding that AIG make public the names of bonus recipients and the managers who approved them.)

But, politically, Obama had little choice but to take a hard public stand against the payouts: In the wake of bailouts and enormous market losses, he is set to embark on a crusade to sell to the American people a $3.6 trillion budget plan that would overhaul the nation's health and tax policies. And the president needs all the public support he can muster.

In its efforts to bar the bonuses, Obama says his administration will use as leverage the $170 billion — and counting — that the U.S. Treasury has already paid out to "rescue" AIG.

During a press conference Monday, White House spokesman Robert Gibbs said that the administration is looking into whether "taxpayer protection can be added" to rules regarding the drawing down of the latest $30 billion loan slated for AIG.

The company, which lost a record $62 billion last quarter, is now nearly 80 percent owned by the federal government.

"This is a corporation that finds itself in financial distress due to recklessness and greed," Obama said. "It's hard to understand how derivative traders at AIG warranted any bonuses, much less $165 million in extra pay."

The bonuses were contracted and the bailout plan devised and approved before Obama was elected (as senator, he voted in favor of the bailout).

Gibbs placed the blame on the Bush administration. He said Monday that the Obama administration is dealing with contractual obligations and responsibilities "we found when they gave us the key to the front door."

Loopholes And Other Legal Matters

Why would AIG go ahead with the bonus payments during this time of crisis?

Because every indication is that it can.

The bailout bill was approved last year at a time of crisis. The bill itself, says economist Paul Weinstein of the Progressive Policy Institute, lacked specifics, and legislators were fearful of a complete collapse of the banking system after the failure of Lehman Brothers and the demise of Bear Stearns.

Lawmakers "were just looking for a bill to stem the crisis," he says, and couldn't — or didn't — anticipate all future untidiness.

To bar the bonuses now, Congress would most likely have to pass a law. And that could set up a situation in which AIG employees end up suing for the bonuses — with taxpayer dollars used to defend the decision to withhold the payouts.

"Is that all worth it?" says Weinstein. "Or is it better to try to get out in front on this issue, and to say that we're not going to allow this to happen again?"

"Obviously, this is a tricky situation," he says.

The bonuses flap could allow Obama to distance himself from past Wall Street practices, but the president also has to show that he feels taxpayers' pain.

At that moment, though his comment held a hint of humor, he spoke for the nation.