For nine years, Rep. John Lewis (right) has led a three-day civil rights pilgrimage to Selma, Montgomery and Birmingham, Ala. He takes along congressional leaders from both parties — and some other folks, like the media. Byron Buck hide caption 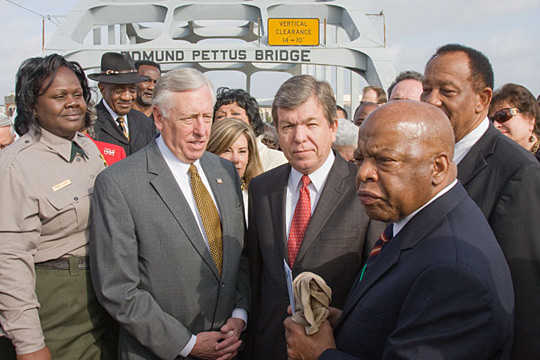 For nine years, Rep. John Lewis (right) has led a three-day civil rights pilgrimage to Selma, Montgomery and Birmingham, Ala. He takes along congressional leaders from both parties — and some other folks, like the media.

Peggy Wallace Kennedy, a daughter of former Gov. George Wallace — an infamous segregationist — spoke of the civil rights marchers in Selma as a brave band of believers who carried the flag of freedom. In the darkest moments, she said, they never gave up on the inherent goodness of mankind. Byron Buck hide caption 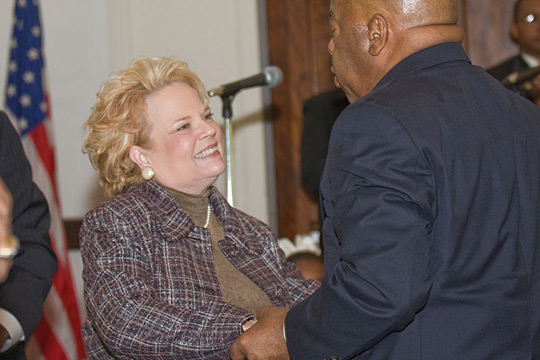 Peggy Wallace Kennedy, a daughter of former Gov. George Wallace — an infamous segregationist — spoke of the civil rights marchers in Selma as a brave band of believers who carried the flag of freedom. In the darkest moments, she said, they never gave up on the inherent goodness of mankind. 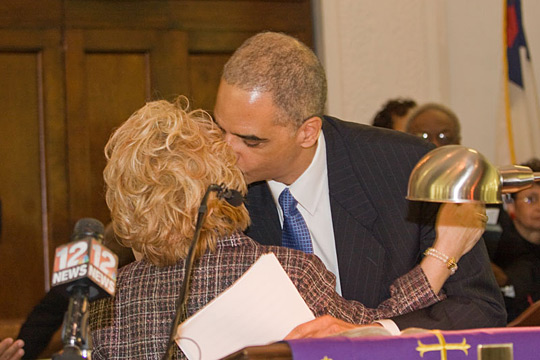 It is rare in life that you get to see history come full circle in a single event on one stage. But earlier this month, I witnessed just such an event in Alabama.

For nine years, Rep. John Lewis of Georgia has led a pilgrimage to Alabama to commemorate the violent events of the 1950s and 1960s.

The pilgrimage travels to Selma, where club-wielding police on horseback gassed and set upon praying marchers led by the Rev. Martin Luther King Jr. It heads to Montgomery, where Rosa Parks was arrested for refusing to give up her seat to a white man on a bus. And to Birmingham, where police chief Bull Connor set dogs and fire hoses loose on women and children marching for the right to vote.

Lewis, trained as a minister, was beaten mercilessly on the Edmund Pettus Bridge in Selma as he sought to march peacefully with King. It was not the only time Lewis would bleed for the cause.

And so every year, he takes some of his congressional colleagues from both parties on this pilgrimage back to his native state, along with some other folks — like me.

Every Window Was Smashed

We started out in Birmingham at the 16th Street Baptist Church, where four little girls died in a bombing in 1963. One of our hosts at dinner was Rep. Artur Davis, who represents Birmingham in the House and is the first African-American to make a serious run at becoming the state's governor. The co-host was Spencer Bachus, who represents the adjacent congressional district and is a white Republican. Bachus, who looks pretty buttoned down, stood to make what I thought would be perfunctory remarks. They were anything but.

He described how his father, one of the city's largest contractors, was approached by a black subcontractor in 1962. The man wanted to bid on installing windows for two public schools being built by the elder Bachus. That simply wasn't done back then, but the senior Bachus agreed to think about it.

"My dad went home that weekend and just made the decision. It was the right thing to do, to let this man bid on the work," the congressman said.

In truth, Bachus hoped against hope the black subcontractor's bid would not be the low one. But it was.

So Bachus gulped, awarded the subcontract to the black contractor, and the windows were installed perfectly.

But on the night before the final inspection on the first school, every window in the school was smashed. The police promised to guard the second school to prevent a repeat. But again, all the windows were smashed. Pinkerton agents brought in by the insurance company eventually concluded the police were complicit. And months later, police again looked the other way. Only this time, four little black girls died in the bombing of the 16th Street Baptist Church.

"I guess shame is not too strong a word," Bachus said. "We're a city that because of [a] past mistake, committed not to make that mistake again."

When Spencer Bachus finished telling that story, Democratic Rep. Mazie Hirono, who has been in Congress just two years, called across the room, "Spencer, I'll cross the aisle now to get to know you."

I guess that's why they call the sponsoring organization for this trip the Faith and Politics Institute.

A Brave Band Of Believers

Day 3 of our trip began in Selma, at Brown Chapel, which was the staging area and, later, the hospital for the marchers 44 years ago on the day that came to be known as "Bloody Sunday."

The two-hour service was astonishing: a vivid portrait of the social and legal revolution that transpired in the second half of the 20th century.

The official speaker for the occasion was Eric Holder, the nation's first African-American attorney general, who had been in office for less than a month. And the person who introduced him was the daughter of former Gov. George Wallace, who died in 1998 — the man who famously told the citizens of Alabama: "Segregation today, segregation tomorrow, segregation forever" — the same George Wallace who in 1963 stood in the door at the University of Alabama seeking to block two black students from enrolling. One of those students was Vivian Malone, Holder's late sister-in-law.

Now these many decades later, Wallace's daughter Peggy Wallace Kennedy spoke of the civil rights marchers in Selma as a brave band of believers who carried the flag of freedom. In the darkest moments, she said, they never gave up on the inherent goodness of mankind.

"I knew in my heart that their cause was just, but unlike them I did not let my voice be heard," Wallace Kennedy said. "For many years I wandered in the world of indifference, until I heard the voice of Barack Obama. He inspired me to believe in myself and to join with millions of others who laid claim to faith and pride in America."

And then George Wallace's daughter turned, and with tears in her eyes, embraced Holder. For several moments, the two just held each other.

'I Saw A New Heaven And A New Earth'

Holder's speech was followed by a sermon from the Rev. Joseph Lowery, who, along with King, founded the Southern Christian Leadership Conference. Forty-four years ago, Lowery delivered to Wallace King's demand to be allowed to march peacefully from Selma to Montgomery.

In January, Lowery performed the benediction at Obama's inauguration. And on this anniversary of Bloody Sunday, the 87-year-old preacher held the Selma congregation spellbound, moving the crowd from laughter to tears. He won howls of laughter at the expense of the latecomers to the occasion: the Revs. Jesse Jackson and Al Sharpton, who showed up just in time to be photographed.

Jackson would be unable to steal his best line, said Lowery, because it was already on YouTube. But Jackson and Sharpton were footnotes on this day compared with their sometimes pivotal — or traumatic — roles in the 20th century.

Lowery's theme for his sermon was from the 21st chapter of the Book of Revelations.

"I saw a new heaven and a new earth, for the old heaven and the old earth have passed away," Lowery said.

At Obama's inauguration, said Lowery, he looked down the mall hoping to see the Lincoln Memorial where King gave his famous "I Have a Dream" speech nearly a half-century ago.

"But I couldn't make out the Lincoln Memorial," Lowery said. "These old eyes have grown dim. But the eyes of my heart saw the Lincoln Memorial and the ears of my soul heard a 34–year-old preacher standing on the steps, issuing a summons to a nation to climb out of the pits of racism to a higher ground of character and competence. And there I was, never dreaming that I would even see a black president. And here I was not only seeing, but participating. And I was glad to be there to say that today, Jan. 20, is the nation's response to that summons issued by that 34-year-old preacher in 1963."

When Lowery finished his sermon, everyone around the pulpit locked hands: Holder, George Wallace's daughter Peggy, Lowery and John Lewis, and yes, Jesse Jackson and Al Sharpton, too. And they sang, "We shall overcome."