Accessibility links
At Red Flag, The Flying's Real, But The Enemy's Not At Nellis Air Force Base on the outskirts of Las Vegas, Air Force pilots train for war games in an exercise called Red Flag. Though the U.S. maintains international air dominance, commanders say it's important for pilots to stay trained and be ready for the call of duty. 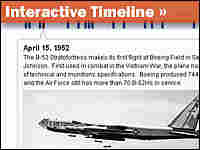 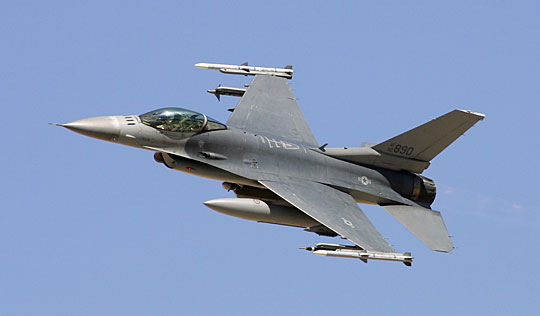 Since the 1970s, fighter pilots have flocked to Nellis Air Force base on the outskirts of Las Vegas for war games called Red Flag.

Today the jets they fly are faster and the weapons are more powerful and precise. Something else has changed too: There's no enemy air force that can challenge them in the skies, which raises the question of whether dogfights are becoming a thing of the past.

Capt. Shane Sullivan steps outside the low sand-colored building that houses his squadron, the 64th Aggressors. F-16s occasionally course through the sharp blue sky, and he gestures toward a relic in the parking lot: a Soviet jet.

"So that signifies who we are," Sullivan says. "We tell people, 'Hey if you're looking for the Aggressor Building, follow the MiG-21.' "

Sullivan's squadron plays the enemy in the training exercise. In their minds, the only enemy worth playing these days is the Soviet Union.

Across the street sits an old armored vehicle.

"You can see it's tracked — it almost looks like a tank, except [for a] couple of missiles onboard there," Sullivan says, explaining that the former Soviet Union would have used those types of vehicles.

The Cold War seems to be everywhere at this desert base; no matter that the Soviet Union came to an end when Sullivan was 10 years old. Soviet and Cuban flags hang in the briefing rooms, next to a large Russian air-to-air missile.

In the squadron's small bar, called a Heritage Room, bullet-riddled pieces of Soviet planes hang on the wall. Even the bar stools are painted with Russian red stars.

Sullivan is a short, stocky and affable 30-year-old Air Force Academy graduate from Massachusetts. He points to his battlefield off in the distance, just on the other side of a snow-covered peak.

"Beyond that range is actually where all the fighting happens," he says. "Where all the training and the important stuff. Once we fly over those ranges, at that point it's pretty much the fight's on."

The fight's on when Sullivan climbs into his F-16 Falcon. His job is to shoot down — in a virtual way — the American pilots who come here to train, jamming their radar, locking on to shoot a missile. On his uniform is the red star patch of the enemy.

Dozens of fighter pilots assemble for a briefing in a large theater, answering to their call signs. Nearly all are square-jawed young men. There are a few women among them, and nearly everyone in the room has that fighter-pilot swagger.

Lt. Col. Dan "Digger" Hawkins, the deputy commander at Red Flag, spreads out a map of the training site, some 12,000 square miles of mountains, lakes and high desert. It's roughly the size of Maryland.

"Typically in a mission you'll have about 40 to 60, maybe even 80 blue aircraft players," Hawkins says. "They must be the friendly. The friendly forces. And then about a dozen of what we call the "Red Players," the enemy aircraft that are defending. They'll set up in the western part of the airspace here and defend their targets on the west side."

He points out that the U.S. has what's called air dominance — no country can match its fighters and bombers, so American ground troops don't have to worry about being killed from the sky.

So why is there such an emphasis on training fighter pilots?

"None of us, I think, can really say with certainty who it is that we may end up having to fight next or what their capabilities are or what weapons systems they'll have," Hawkins says. "And so that's why we keep our skills honed with exercises like Red Flag — so that we can be ready to defend the country at a moment's notice against whoever it is who may try to attack us."

No one who is currently training at Red Flag has ever been in a dogfight, but the training they receive is what Hawkins calls "very realistic dogfights."

"As far as actual live combat, I'll believe that some of the last air-to-air kills that the U.S. Air Force had was in Bosnia back in the 1990s."

That was before these students were even pilots.

Capt. Brock Stevens, a 32-year-old weapons officer from Mountain Home Air Force Base in Idaho, flies aboard an F-15 Strike Eagle, an Air Force fighter bomber. What he faces in the skies above Nellis is like nothing he's seen in the real world.

As Threat Changes, So Does Training

Without any real threats, Stevens and others talk of possible threats. Russia is still cranking out top-notch fighter jets and not only flying them but selling them to China. The Chinese are also building more sophisticated missiles that could challenge the F-16.

Americans are answering with new aircraft like the Joint Strike Fighter and the F-22 Raptor. All of this puts the Obama administration in something of a bind — does it spend billions of dollars to combat a theoretical threat?

This is why the Air Force is rethinking how it uses its fighters — less for dogfights than for targeting enemy troops on the ground, what is called "close air support."

"Our sister squadron at Mountain Home just got back from Afghanistan, and about 90 percent of their sorties over there were close air support," Stevens says.

So for the first time in its history, Red Flag has added an extra week of training to focus on helping ground troops. Pilots practice striking suspected roadside bomb emplacements or enemy vehicles.

From Cockpit To Control Room

But increasingly, the job of protecting ground troops falls to another attack aircraft that sounds more like a lawn mower — a single drone, like the one called a Reaper, which can carry up to 14 Hellfire missiles.

Just 45 minutes up the road, pilots sit inside a building at Creech Air Force Base and tug at a joystick. They fly a Reaper 8,000 miles away in Afghanistan. The pilot watches its progress on a computer screen.

Stevens has 10 friends flying drones, and he doesn't plan to join them.

"I mean the job they're doing is effective, but it's not like sitting in an airplane flying. It's sitting on the ground at 1 G instead of actually being in the fight," he says. "You'd rather drive a race car than a remote-control car."

But the Air Force isn't laughing at his joke — it's buying hundreds more Reapers and just opened a new school to train these remote-control pilots.

So could a drone ever replace a fighter jet? That's doubtful, says Col. Eric Matthewson, who oversees drone aircraft from the Pentagon.

"Reaper lacks the flexibility that a fighter would have," Matthew says, referring to a plane's speed and maneuverability. Take a quick turn in a Reaper, he says, and you would lose the satellite link. The computer screen would go blank. And watching a computer screen, says Matthewson, is nothing like being in the sky above a battlefield, where the pilot has a wide view of friend and foe alike.

"The ability just to be able to look out your cockpit window and in a split second take in the whole scene is something you just can't do in an unmanned system today," he says.

So until the drone turns him into a relic, fighter pilots like Sullivan will keep flying.

Part one of this report, which aired Monday, March 16, explored the history and culture of fighter pilots.