Accessibility links
Willie Nelson Brings It Back To Western Swing Two Austin musical institutions — Willie Nelson and Asleep at the Wheel — have teamed up on a new album to showcase classic western swing. With horns, fiddles and a pedal steel guitar, the music takes Nelson back to his roots. The project has been in the works for a while, having hatched from the mind of the great Jerry Wexler more than 30 years ago.

I Ain't Gonna Give Nobody None o' This Jelly Roll

Bring It on Down to My House 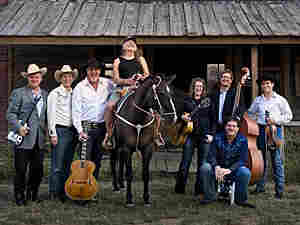 Willie Nelson (on the horse) and Asleep at the Wheel have teamed up to produce a tribute to Bob Wills and western swing. Lisa Pollard hide caption

Willie Nelson has collaborated with everyone — or just about everyone — from jazz trumpeter Wynton Marsalis, to singer Julio Iglesias and rapper Snoop Dogg. But Nelson's latest collaboration brings him a little closer to home. He's playing the music of one of his idols, western swing master Bob Wills, with the band Asleep at the Wheel.

It's the kind of old-style music you might have heard when Wills' tour bus stopped at a honky-tonk beside the highway — a joint like Willie's Place. It's a combination truck stop, restaurant and dance hall an hour south of Dallas in the tiny municipality of Carl's Corner. Nelson is part owner of the operation, and it was one of the stops on his tour with Asleep at the Wheel.

The town was created for the sole purpose of selling beer in a dry county. In an earlier day, Carl's Corner was just the kind of place that Willie might've sung about — known far and wide as a way station for lonely truckers looking for love on the interstate.

The proprietor, Carl Cornelius, is shocked — shocked — that anyone would suggest such a thing. "Don't have any of that kind of that stuff," Cornelius insists. "People live in a world of fantasy; somebody can say something as a joke, [but] that's just not the truth."

Nowadays, 18-wheelers line up to buy diesel and a boutique biofuel called Willie's Biodiesel. Inside, it's a shrine to the 75-year-old country-music icon.

The Triangle Of Twang

Culturally, Carl's Corner sits in the heart of a region with rusting cotton gins, well-kept Baptist churches and deep musical roots. Call it the Triangle of Twang. Nelson grew up just down the interstate in the farming town of Abbott. Over in Mexia lived the great country-and-western songstress Cindy Walker. And Fort Worth, the triangle's third corner, was home of the King of Western Swing, Bob Wills.

The new tribute to Wills was executive-produced by the late, legendary Jerry Wexler — who helped launch the careers of Ray Charles and Aretha Franklin, among others. In the early 1970s, Nelson was signed, briefly, to Atlantic Records, when Wexler decided Willie should do a tribute to western swing.

"He always wanted to do this album," says Nelson. "He wrote down the titles of these songs, and he wanted to see me do 'em at some point because he loved western swing, and he knew the music."

It was a natural concept for Nelson, because this is the music he was raised on. "I've been in a band — ever since I was 10-12 years old — of one kind or another, and we always sang Bob Wills because that was the hot music of the day," says Nelson.

He left Atlantic before he could do the western swing album. But Wexler never forgot the concept. In 2007, more than 30 years later, he called up Nelson's manager and suggested Willie team up with Asleep at the Wheel to do the record.

Ray Benson, leader of Asleep at the Wheel, says he was honored to co-produce Wexler's last project. "I'd send him mixes in the mail. He heard the finished tune on about seven of 'em, then he passed away a month before it was totally packaged," says Benson.

Wexler died last August at the age of 91, after a half-century in the music business.

Nelson and Benson go back a long way, themselves. It was Willie who first invited Benson and Asleep at the Wheel — then a cowboy-hippie band playing around the San Francisco Bay Area — to think about a new home.

"I told him he should go to Austin, bring his band, because I heard 'em, I thought they were great," says Nelson. "I knew that everybody in Texas would love it."

Benson chimes in, "And we loved Willie Nelson because Willie's approach to music was ours: If it's a good song and there's a little bit of jazz, little bit of country, little bit of blues, that's what it was all about."

Joe Nick Patoski was in the crowd to hear Willie and the Wheel at Willie's place. Patoski is a Texas music journalist and author of the recent biography, Willie Nelson: An Epic Life — and Patoski has heard Willie's collaborations with Iglesias, Marsalis and Snoop Dog. To him, finding the swinging cowboy jazz band on stage in Carl's Corner feels like Nelson has come home.

"All these cats are pickers," enthuses Patoski. "Forget that they're songwriters or entertainers. They're jazz players, and they're playin' hot, and this is what counts."

Fellow country outlaw Waylon Jennings sang this about his old friend Willie Nelson: "He'll be the first to tell you, Bob Wills is still the king."