Accessibility links
'Relentless Pursuit': A Year Teaching America Donna Foote followed four elite college graduates in the Teach For America program. They were assigned to one of the worst schools in one of the toughest neighborhoods of Los Angeles, and Relentless Pursuit is their story. 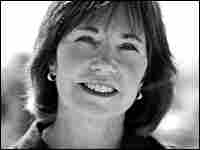 Donna Foote followed four elite college graduates in the Teach For America program. They were assigned to one of the worst schools in one of the toughest neighborhoods of Los Angeles, and Relentless Pursuit is their story.

TFA recruits are a remarkable group, and the program is an incredibly popular destination for new college grads. In 2008, roughly 10% of Georgetown, Harvard and Yale's graduating seniors applied. 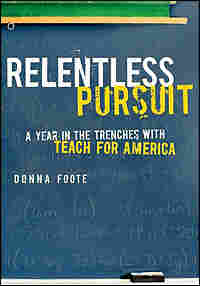 When the lights went off in room 241 during her fourth-period special ed biology class, Rachelle didn't think anything of pit. The bells seemed to ring constantly at Locke High School. Why should she expect the lights to work?

This Monday was the first day of the first full week of the first year of the first job of her professional life. Never mind that she had had only five weeks of training. Over the summer, Rachelle Snyder, psychology major and former captain of the University of Pennsylvania soccer team, had become Miss Snyder—or sometimes just Miss—special education teacher at Locke High School in Watts. The transition had been surprisingly easy to make. Except for the fifteen pounds she gained, Teach For America's "institute," aka boot camp, didn't bother her. It was like soccer training: she woke u early, worked hard, got the job done. She was exhausted—they all were. But during breaks, when other teachers-in-training were having panic attacks, Rachelle would catnap on the concrete benches that line the walkway along Locke's inner quad, her long blond hair bunched up beneath her head like a pillow, trousers rolled up, her pale skin bathed in the harsh white light of the L.A. sun.

The day had started well. She'd gotten to school early, reviewed her lesson plan, and made sure that the desks were still arranged in clusters of four, exactly the way she'd left them on Friday. The morning had flown by. The kids in the early periods were attentive, eager to please. She particularly liked her girl-heavy third period. Three fourteen-year-olds had children of their own at home, and a fourth was pregnant. She found that out after she had the kids make peanut butter and jelly sandwiches as a way to introduce the idea of steps and procedures in science. "You think I don't know how to make peanut butter sandwiches?" retorted one girl. "I got a baby at home and he always be screamin' for them."

Maybe it was Rachelle's blond hair and light blue eyes—the girls seemed drawn to her. Some even brought their friends to the classroom to get a look. "See!" they squealed. "She looks just like a Barbie doll!" Rachelle couldn't access their computerized Individualized Education Programs (IEPs), the government-mandated plans of instruction and services specially tailored to meet the specific needs of each student with a diagnosed learning disability. So she had no way of knowing how these smart, streetwise girls had come to be sitting there, hanging on her every word.

She had a pretty good idea how the twenty boys in her fourth-period class got there. They were in special ed because their behavior interfered with their ability to learn. It was certainly interfering with her ability to teach. These boys were rude, crude, and disrespectful. She didn't think it had anything to do with her gender, her race, or her youth. She was reasonably certain that they behaved badly with every authority figure.

It was only five days into the school year, and she felt she was already losing control of period four. She had been wrestling with how to handle all her special ed kids, but these boys were especially troubling. Her instinct was to try to win them over with kindness. They'd probably had enough tough single women in their lives. She wanted to show them something else. Do I continue to be nice? If I do, will they break me? As the boys straggled in, shorts hanging low on their hips, T-shirts on inside out, some with do-rags hugging their heads, she'd felt tense.

She worried about two of her African American students—cousins Martel and Deangelo—who'd almost gotten jumped on their way to school the Friday before. The boys had come into class that day subdued, scared to leave the building unless she walked them out. What would they be like today?

Then there was Raúl. Last week she'd handed out a survey asking generic questions about the kids' goals and attitudes toward school. Raúl's response stopped her cold. He said he hated teachers and liked to "kill." He drew a picture of a building with a boy on top firing a rifle. The bubble said "Die Fucker." There were stick figures on the ground running away from the words "Kill, Kill, Kill." Rachelle grabbed the seating chart and was surprised to find that the artist was a quiet little Latino kid, one of the few boys in class who didn't cause trouble. He kept his head down and his eyes averted. She didn't think he was looking for attention with his threatening handiwork; she thought he was an emotionally disturbed boy who needed help. She alerted the principal, Dr. Frank Wells, immediately. He seemed on top of things, but Raúl was one of some 3,100 kids in his charge. Will Raúl be in class today? Will he have killing on his mind?

Five, ten minutes had passed before everyone was seated. The day's lesson was about the scientific method. The kids were going to test the manufacturer's claim that the fertilizer Miracle-Gro was guaranteed to produce especially hardy plants. Each group of four was given seeds, a pot of soil, and a bucket of water. Only half the class had shown up, but Rachelle was actually relieved. The fewer there were, the more easily she could maintain control. After explaining the project, she'd moved from group to group—praising those busy at work, gently scolding those who were fooling around. The room hummed with the sound of the kids' voices as they prepared their pots. Rachelle began to relax.

Then the lights went off. At first it didn't seem like cause for alarm, but within minutes Rachelle could hear the sound of kids running up and down the stairwell and along the hallway outside her room. Her students heard the commotion, too. Suddenly, the vibe in the classroom changed. The kids were uneasy, distracted. The air felt charged, the room dangerous.

Rachelle peeked out the door. Students were literally running wild, shouting and jumping one another in the darkness. Graffiti artists had whipped out their markers and were signing the walls with gleeful abandon. The security guard who usually sat within ten feet of Rachelle's room was missing. She slammed the door shut.

"You are not leaving," she said to her students, her voice rising in fear. "Sit down. Let's get back to work."

But the kids were unsettled. Some were at the door, clamoring to get out. Others circled the desks, itching for trouble. When told to sit, they refused. When ordered to continue working, they said the experiment sucked. Rachelle tried to keep teaching. As she bent over to inspect one kid's pot, her T-shirt inched up her back, revealing a patch of bare white flesh above her hip-huggers. Dante, a tall, skinny black boy, made a farting noise. The classroom erupted in laughter. Encouraged, he announced in a high-pitched voice that he had to pee. Rachelle told him he was forbidden to leave the classroom.

Dante insisted that if he was not allowed to leave, he would pee in the classroom. As he began to lower his pants, the kids taunted him: "It's so small! Your dick is so small!" They dared him to make good on his threat. "She wants you! She wants to see you! Do it, do it! You want to do it!" they chanted.

He did it. Dante urinated in a water bucket right in the middle of Miss Snyder's class. At her wit's end, Rachelle ordered the entire class out of the room: "You guys need to leave. NOW! Dante, you need to stay."

"I want to transfer out of this class," said one boy as he left the room. "It sucks."

Excerpted from Relentless Pursuit by Donna Foote. Copyright © 2008 by Donna Foote. Excerpted by permission of Knopf, a division of Random House, Inc. All rights reserved. No part of this excerpt may be reproduced or reprinted without permission in writing from the publisher.