Accessibility links
Movie Review - 'Buck Howard': An Enigma Without The Mystery A law-school dropout signs on as a magician's assistant, hoping for something more glamorous one day. But the "great" Buck Howard's career seems to be in a tailspin — until a twist catapults him back to stardom, with his young assistant on his coattails.

'Buck Howard': An Enigma Without The Mystery

'Buck Howard': An Enigma Without The Mystery 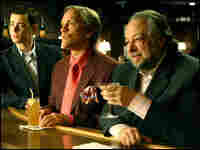 Rated: PG for some language including suggestive remarks, and a drug reference

'May I Look In Your Right Shoe?'

'I Have No Idea What I'm Doing' 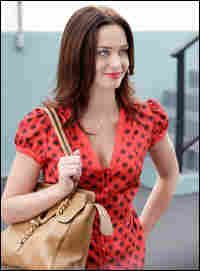 Charmed: To Buck's chagrin, the big-time PR firm he has hired sends junior publicist Valerie, played by Emily Blunt, to revive his fame.

I'm trying to imagine the pitch meeting for The Great Buck Howard, an earnest little showbiz comedy in which a law student named Troy (Colin Hanks) drops out midsemester to take a dead-end job as assistant to the title character — a cornball Kreskin-style mentalist (John Malkovich) who is distinctly over the hill but decidedly still full of himself.

The kid's looking for a respite from academia; the performer's looking for respect in a world that's passed him by; and after seeing the film, I'm just not sure what the audience is supposed to be looking for.

Laughs? Schmaltz? Life lessons? They're all there in Sean McGinly's pleasantly lackadaisical script, but not in such abundance that they seem reason enough to see the film.

There's nostalgia here, for a once-effervescent form of showbiz that's lost its fizz. (Buck's act involves lots of banter, a little hypnotism, and a signature "show me the money" effect in which he tries to find his paycheck after the audience hides it.)

But as the stars traipse from Bakersfield to Cincinnati playing to geriatric crowds in marginal venues, McGinly, who also directs, doesn't make a case — at least not the case he needs to — for why the form once worked.

Any synopsis of The Great Buck Howard is going to make it sound more than a little like My Favorite Year, in which flunkey Mark Linn-Baker catered to dissolute erstwhile matinee idol Peter O'Toole. But in O'Toole's once-magnificent old ham, that film had a compellingly poignant center.

Here, while Malkovich is amusingly tyrannical and condescending, and makes more comic hay than you might expect with one character tic — an overenthusiastic handshake, which seems to take cameo-ing celebrities Regis and Kelly, Tom Arnold, and the Stewarts (Jon and Martha) entirely by surprise — the mentalist he is playing is so superficial that after the first half-hour or so, there's not much new to discover about him.

Blandly competent Colin Hanks doesn't give Malkovich much of a foil to bounce off. And while there's efficient work being done in character parts — by Steve Zahn, especially, as a star-struck rube, and also by Colin's offscreen dad, Tom Hanks, who plays his onscreen dad — it's not until late in the film, when Emily Blunt shows up as a hardboiled publicist who bucks Buck's tirades, that the plot's mild conflicts begin to seem anything like showbiz flimflam.