Accessibility links
Movie Review - 'Knowing': Disasters Anticipated, And Accomplished A cryptic message, written decades ago and enclosed in a time capsule, ends up in the hands of a young boy. When his dad discovers that the code maps every disaster for the past 50 years — and many to come — he sets out to prevent catastrophe. 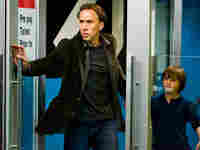 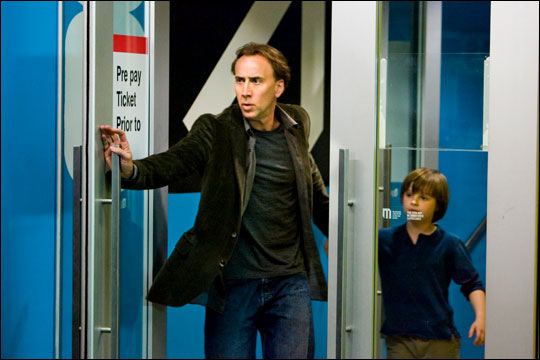 No Way Out: Nicolas Cage plays John Koestler, a professor racing against a terrible prediction.

'Get Off The Train' 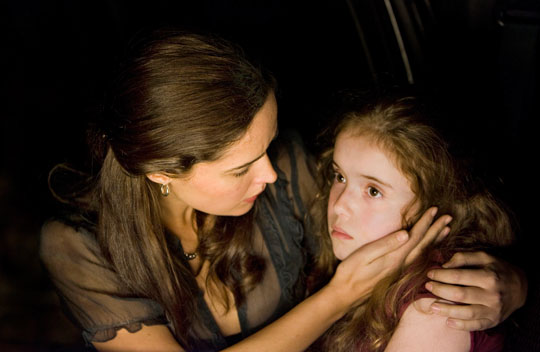 Cold Comfort: Koestler's ally (Rose Byrne) and her daughter join in the quest to defuse what becomes a sinister string of prophecies.

Is there nothing Nicolas Cage won't do? No check he won't cash?

There are respectable gigs among his many screen credits this decade, tolerable movies like Adaptation and World Trade Center. But for the most part his recent oeuvre is a flabbergasting checklist of the asinine (The Wicker Man), the absurd (Ghost Rider) and the profoundly unnecessary (Bangkok Dangerous).

And now, in Knowing, Cage takes his taste for ludicrous material all the way — almost, but not quite, into the pantheon of films so utterly, preposterously awful they're destined for some kind of perverse cult appreciation.

No, that's being generous: Knowing isn't just bad; it's bad for you, a spectacularly stupid movie both aesthetically and morally repugnant.

Directed by Alex Proyas from a flamboyantly moronic screenplay by Ryne Pearson, Juliet Snowden and Stiles White, Knowing tells of MIT astrophysicist John Koestler (Cage), who stumbles across a prophecy that foretells major disasters and possibly the end of the world. The career meltdown of those who made the movie is not, alas, among its secrets.

We begin 50 years in the past, with a class of schoolchildren drawing imagined visions of the future for inclusion in a time capsule to be buried on campus. One freaked-out little girl, hearing voices in her head, scrawls a long list of numbers on her paper. Unearthed half a century hence and obsessed over by John's son, Caleb (Chandler Canterbury), those numbers can be decoded to indicate the dates, death counts and GPS coordinates of traumatic events.

Details of 9/11 are what first catch John's eye — and what first tip the viewer that Knowing intends to exploit contemporary fears of a world gone topsy-turvy, an unpredictably violent place pitched at the edge of inexplicable terror. Sure enough, as John grows increasingly concerned over the implications of the numbers, the movie gets more and more repellent in its exploitation of contemporary anxieties.

From its tone to its style, from production design to cinematography, Knowing feels halfheartedly cribbed from any number of recent supernatural thrillers. Bad enough — but its reductive pop psychology is especially tiresome.

John, of course, has lost his wife in an accident, so his mania for unlocking the prophecy is motored by a need for redemption and catharsis. His cutesy-wounded affection for his son, who suffers a hearing impairment, doubles the maudlin factor and gives us the groan-inducing running motif of father and son gesturing the sign language for "I love you forever."

Amid all this appalling cliche, Knowing summons its entire reserve of filmmaking energy for gleeful scenes of mass death: an extremely violent plane crash that sends passengers fleeing the wreckage covered in flames; an outlandish subway accident that wipes out several platforms of commuters with a CGI splat. Predicated on and playing to our now-ingrained fears of terrorism, these set pieces feel like the entire raison d'etre of the film — or at least the only thing it truly cares about.

And by tipping us with the prophecy that there will be three such disasters, Proyas & Co. turn the experience of Knowing into an ugly sort of death watch, a slog through lazy writing, indifferent acting and blase direction with no hope of anything but chaotic violence as reward.

As for that third and final prophecy: It's so cynical and loony as to beggar description. But it does confirm the ultimate message of Knowing: that life is an unknowable, fearful, entropic disaster in the making, and there's nothing you can do about it except run amok in clueless anxiety.

Unless, of course, some heavenly miracle intervenes — and for those who endure the torture of Knowing, the arrival of the end credits will seem precisely that.