Accessibility links
Elvis Perkins: Out Of The 'Dirge' The folksy songwriter returns with his second album, Elvis Perkins in Dearland, now with a more upbeat, countrified sound. Yet even with the shift, Perkins continues to wrestle with his past. 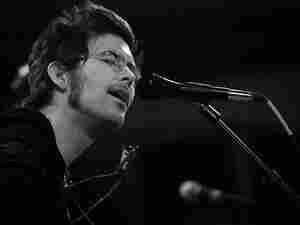 Elvis Perkins, 33, released his debut album Ash Wednesday in 2007, nearly six years after the death of his mother. Courtesy of the artist hide caption

Based on the catchy arrangements of Elvis Perkins' sophomore release, Elvis Perkins in Dearland, the album seems like a more upbeat, light-hearted affair than its predecessor — that is, until you take a closer look at the lyrics.

"I don't let doomsday bother me — do you let it bother you?" he sings on "Doomsday," chirping over a pleasant blend of brass, tambourine and even a marching drum. Though he originally wrote the song as a waltzy "dirge," he ended up shifting the mood after discussing it with his band mates. The same joyous sound permeates the album, often serving as a hopeful contrast to its troubled origins.

Elvis Perkins is the son of Anthony Perkins, the actor most famous for his role in Psycho. Anthony died of complications from AIDS when his son was a teenager. Tragically, Elvis' mother, Berry Berenson-Perkins — a noted photographer — was aboard one of the planes that struck the World Trade Center on Sept. 11, 2001.

"The songs are their grandchildren they didn't get to meet," Perkins says. "They strike me as offspring from time to time, and some of them on the new album sort of stare back at me a little funny."

His feelings for his parents also emerge in songs like "123 Goodbye," which includes the line "I love you more in death than I ever could in life," though Perkins prefers to sing about these thoughts rather than talk about them.

"I've never been a good storyteller when it comes to regular conversation," he says, "which I think is in part why I've been driven to write these songs. I get to put as much as I like into it, say my piece and sort of feel more successful [that way]."

Click the link above to listen to the full interview with Morning Edition's Steve Inskeep.