Accessibility links
Earliest Dinos May Have Been Fuzzy A strange discovery has scientists wondering, were dinosaurs fuzzy? Tianyulong confuciusi, a smallish critter discovered in China, had what look like protofeathers along its body and tail. The fossil suggests that "dinofuzz" might have been much more common than previously thought, even going back to the common ancestor of all dinosaurs.

Earliest Dinos May Have Been Fuzzy

Earliest Dinos May Have Been Fuzzy

Scientists have been arguing for years about whether some dinosaurs were warm-blooded. Now they've got something else to argue about: Were they fuzzy, too? That's what scientists suspect after analyzing a strange new fossil from Liaoning Province in Northeast China.

The discovery, described in this week's issue of the journal Nature, is a smallish critter a little less than 3 feet long. 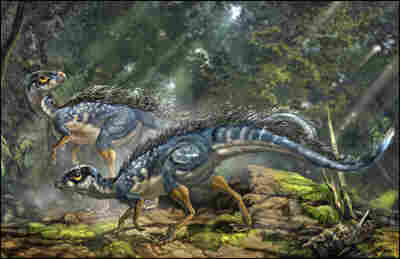 Its fossilized bones are splayed out in a piece of stone and date back to the Early Cretaceous period, 99 million to 144 million years ago. 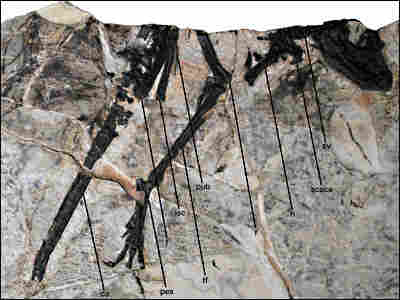 The dinosaur was named Tianyulong confuciusi by the Chinese scientists who found it in a museum collection.

What makes the discovery weird are three patches of what look like filaments or protofeathers along the animal's body and tail. In 2002, scientists working in the same Chinese province described a theropod dinosaur, related to Tyrannosaurus rex, with similar spiky protofeathers.

Below is an image of the wispy filaments or protofeathers found in the fossil. 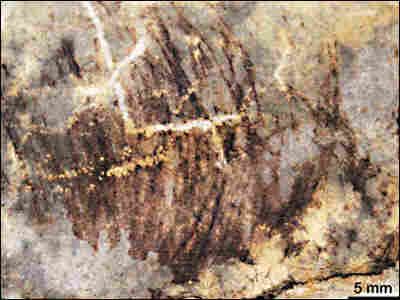 "It's an interesting animal that raises as many questions as it answers," says Lawrence Witmer, a paleontologist at Ohio University. It's hard to tell if these early feathers grew on the outside of the animal's body or if they were some sort of connective tissue from inside the body. If the latter, then this isn't such a big deal.

But if they were featherlike growths on the outside, Witmer says, it would be quite extraordinary. Previous feathered dinosaurs were from the "other side" of the dinosaur family — the big carnivore group that included T. rex and other big meat-eaters. That's the group from which modern birds are descended.

This new discovery suggests that dinosaurs with what Witmer calls "dinofuzz" might have been much more common than previously thought, even going back to the common ancestor of all dinosaurs.

"People are shouting at each other about this," Witmer says, because the interior versus the exterior evidence is still ... well, fuzzy. But it changes what scientists will now look for when they dig up fossils. Even dinosaurs known to have scaly, reptilian skin might have had some fuzz.

"When you look at a chicken, it's got feathers but its feet look reptilian," Witmer says. Dinosaurs, at least some of them, might also have been a polyglot of feathers and scales.