Accessibility links
'Downriver Revival': Documenting The Double U In the mid-1960s, an electrician converted his basement into a jerry-built, custom studio he dubbed Double U Sound. Between 1967 and 1981, Felton Williams recorded more than 300 reels of tape. Downriver Revival is the first in a series of compilations focusing on the recordings of these local studios.

While You Were Gone 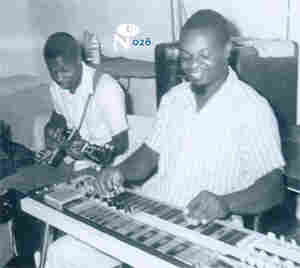 The album cover of Downriver Revival. The album collects decades worth of studio recordings from Double U Sound. Numero Group hide caption

In the music industry, a custom studio usually refers to a recording business, built small and charging cheap, designed for aspiring artists with big dreams but flat wallets. Few records that come out of custom studios ever find national success, but their vaults can become impromptu repositories for local music personalities and styles. A new compilation series called "Local Customs" focuses on these tiny, work-for-hire studios. Its first release is Downriver Revival.

Ecorse, Mich., is a small, three-square mile suburb a few minutes downriver from Detroit. It was here in the mid-1960s that Felton Williams, an electrician for Ford Motor Co., converted his basement into a jerry-built, custom studio he dubbed Double U Sound.

Between 1967 and 1981, Double U was available to local musicians looking to test the waters with their first recordings. Not surprisingly, the studio's first clients, an R&B group named The Combinations, borrowed heavily from the recording giant a few miles upriver — Motown.

In Double U's early years, Felton Williams accepted or pursued artists from across the region's diverse musical spectrum. Detroit's booming industrial economy was a major draw for migrants from across America, especially the rural South. Williams himself was born in Mississippi. As a result, Detroit's musical DNA was built on country, jazz, soul, gospel, rockabilly, funk and more. Down in the Double U basement, these styles often flowed into one another.

Williams recorded both secular and gospel music, but in 1970 he committed to working solely with artists from the Church of the Living God in Toledo, Ohio, where he himself learned how to play pedal steel guitar. It was in the church that Williams met Shirley Ann Lee, a gospel singer who provided Double U Sound with some of its most successful recordings.

Double U's last recording was in 1981, but Williams kept almost everything — more than 300 reels of tape. The new compilation includes a bonus disc that allows listeners to click through 50 of these reels, accessing additional hours of recordings, most of which were never released. An additional half-hour DVD documentary also profiles Williams, the artists he recorded and the neighborhoods they all came from. Altogether, Downriver Revival is a remarkable time capsule — not just of Double U Sound, but of Ecorse, its surrounding towns, and all the pockets of local talent that have grown along the northern banks of the Detroit River.