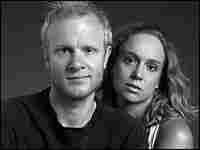 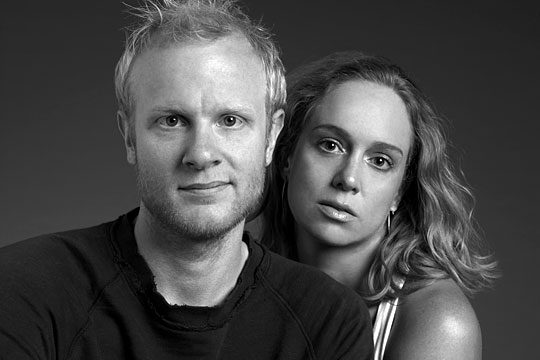 A year ago, Caitlin Shetterly and her husband, Daniel Davis, left Portland, Maine, and moved to Los Angeles. The country was headed for a recession, and Davis' job as a studio photographer had been reduced to part-time status.

When my husband, Dan, and I piled into our Prius with our dog, Hopper, and cat, Ellison, we thought we were doing the smartest thing in a failing economy: going West. Yeah, we joked about being the Joads, and we said Hopper, with his ears cocked, looked just like Henry Fonda in a slouch cap. And sure, much of our move was on credit cards. But we thought the world would open up for us in Los Angeles. And it did for a few months. Dan started to build a promising freelance career, and I got pregnant.

But by the beginning of December, Dan couldn't book a job. In January we had our son, and the one job Dan had lined up was canceled. By the first of February, we knew we were in trouble.

It's close to midnight, and we've finally gotten the baby to sleep. Now we can talk.

"We're in a terrible situation. We're on the verge of losing everything," Dan says.

"Well, we have no income, Cait. We have medical bills, we have credit card debt, we have a $2,000-a-month rent for an apartment that is ridiculously small," he responds.

In addition to trying to book photo work, Dan has been applying for literally hundreds of jobs on Craigslist and has gone to restaurants, hotels, coffee shops, supermarkets — you name it. Still, even though he knows this is happening to a lot of people across the country, it feels personal.

"I'll come to the last shop on a block, and I don't want to turn around to walk back to the car, because I feel like everyone's watching me, everyone's saying, 'There's that poor sap with his hand out. What's wrong with him? He can't find a job?' So I've been walking around the block behind all of the stores to get back to the car," Dan says.

"It's not that I don't want to do the work, or I think that I'm better or above the people working or the jobs, the type of work that's there. I'm not. I just feel like I have bankable skills, I have a college degree, I have an incredible work ethic and I can't even get a job bagging groceries," he says.

With nothing on the horizon and a 3-week-old baby, Dan and I start thinking less about strategy and more about survival. It's amazing how, when you start to feel pressed into a corner, you'll consider almost anything — even something as drastic as not paying rent and risking eviction. I call my friend Jess, back home in Maine, to ask her if she thinks we should take that chance.

"If you don't pay your rent and you get evicted, like if you ever wanted to come back to California ... you won't be able to get a place in Venice [Beach] again," Jess says. "That's a big bridge to burn."

She suggests that maybe we should pack up and go home.

"You could probably get some super sketchy high-interest loan or something, but that's just stupid," Jess tells me. "It's smarter, probably, to go home and see what you can work out with your family. And you're not going to live with your parents forever. Something will happen; something will change."

My mother, it turns out, has already been thinking about our problem. "What I thought I'd do is, one of the neighbors and I can move your bed down to the library and take out some of the furniture that's in the library, so you can have it more as a bedroom, if that sounds good to you. Does it?" Mom asks.

My mother lives alone in a small house in the woods. She'd need our help to pay for propane and extra food, but she thinks it can work.

"We're a family, No. 1, and we stick together," Mom says. "And No. 2, I think that we can turn this lemon into lemonade, I really do. I think there are going to be really nice things. ... I know it will be hard for you — you'd rather have your own place. But at least you're home. And I think Marsden might have a good time."

But Marsden is barely 6 weeks old. He hasn't had any shots yet. And he doesn't yet sleep through the night.

We take him to his pediatrician to find out whether a long car trip across the country is even possible. Dr. Efron says he'd prefer it if our son were at least 3 months old and had started immunization before we hit the road. That makes us unable to consider leaving before April 1. At night, after I put my son to sleep, I think of his vulnerable innocence, and I want my husband to make this better.

But even if we get all the way back home across the country to Maine with our baby and our stuff, Dan worries that our options are limited.

"We're screwed. There's no other way around it — we're screwed, Cait," he says, adding, "I'm going to have to pick potatoes and blueberries in the summer, but we have to hold on until the summer for me to go out into the field."

Recently my father visited us and his first grandchild. Even though I knew he had lost almost all of his savings tied up in the stock market last fall, I asked him if there was any chance he could help us hold on in L.A.

"Well, when we were talking earlier about the ways, as a family, we would want to support each other, one of the ways that's not possible is to just say, 'OK, I've got this extra money, I'll give it to you,' " Dad said. "The amount of money you need is more than the amount of money I make in a month."

As much as the little girl in me would have loved for my father to have been able to swoop in and make this all go away, I know that what's happening to us is larger than anything he alone can fix. I felt some kind of weird relief that what he really wanted to offer was that we go home. In Maine, he, too, has land where we can cut wood and grow a garden, where we can find refuge.

Right now, the simplicity of that thought — whether or not it comes to pass — gives me comfort.