Accessibility links
Engineering A Good Hair Day Hair product companies have invested lots of time and money into researching how hair works, and how to best care for it. So what's really going on when you shampoo your hair, anyway? And do expensive shampoos produce better results? 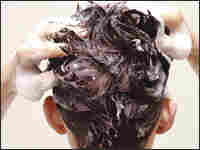 The foaming agents in shampoo don't actually clean your hair. But people like lather, and have come to associate it with cleansing. iStockphoto.com hide caption

How Often To Wash?

How often you should wash your hair depends on your scalp, hair type, what styling products you use in your hair and how much you sweat. For instance, African-American hair tends to produce less sebum. Thin, straight hair can get oily more quickly because it's easier for the oils to work their way down the hair shaft. Curly hair has a lot more twists and turns, so it takes longer for oils to travel down it.

Web Chat: How Often Should You Shampoo?

The reason for your lackluster locks? You may be washing your hair too much.

See what the experts had to say in response to your questions. 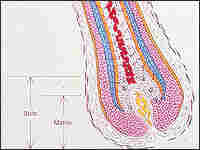 This hair follicle diagram shows the oil-producing sebaceous glands and the root of the hair. The lipid layer that coats the hair shaft is about 10 nanometers wide, thousands of times thinner than a sheet of paper, and much too small to depict visually. Courtesy of P&G and The World of Hair by Dr. John Gray hide caption

toggle caption
Courtesy of P&G and The World of Hair by Dr. John Gray 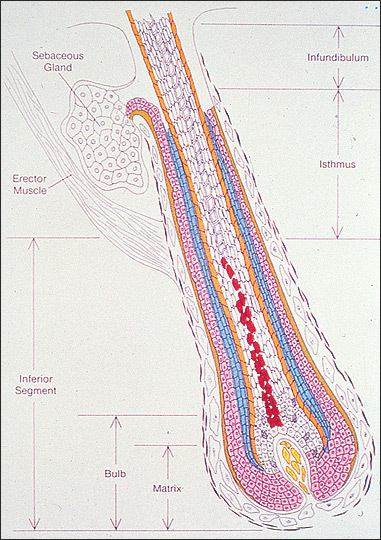 This hair follicle diagram shows the oil-producing sebaceous glands and the root of the hair. The lipid layer that coats the hair shaft is about 10 nanometers wide, thousands of times thinner than a sheet of paper, and much too small to depict visually.

Courtesy of P&G and The World of Hair by Dr. John Gray

Hair has a built-in system to protect it from daily damages like heat, friction and water. And a big part of that defense system lies near the root of hair: sebaceous glands that produce oil to coat and protect the hair.

A layer of lipids coating the hair shaft is another major part of that system. The body can't repair hair after it has grown out of the root; at that point it's dead. But this layer of fatty molecules helps protect and preserve the hair. That natural lipid shield can wear away, however, or get damaged from daily barrages like blow-drying, brushing and applying styling products.

A good test of your hair's protective fatty coating, says Jeni Thomas, a senior chemist with Procter & Gamble, is to splash a water droplet onto your hair. If the water beads up, then your lipid layer is intact. If the hair soaks it up immediately, it's an indication you don't have much lipid layer left.

When we think of shampoo, most of us imagine a good foamy lather. But foaming ingredients — the common one is cocamide DEA — don't do anything other than make foam. People like lather — it makes them feel like a product is working.

What actually cleans your hair is the detergent, such as sodium laureth sulfate or sodium lauryl sulfate. These detergents work by bonding to the natural oils in your hair — which tend to collect dirt, styling products and scalp flakes — and allowing them to be washed out by water.

In high concentrations, these sulfates can be an irritant to the skin, but the small doses in shampoo are perfectly safe, says dermatologist Michelle Hanjani, according to studies by the American Cancer Society and the federal government. But because there are often multiple detergents in a shampoo, a consumer can't tell the cleansing strength by reading the ingredient list alone, she says. The best way to know which ones are mild and which are more heavy duty is to read the description on the label.

The cleansing detergents can leave the hair exposed, says Thomas, so shampoos also have conditioning agents.

Cetyl and stearyl alcohol may sound harsh, but they are actually emollient-rich fatty alcohols that help protect the hair's lipid layer. Silicones, such as dimethicone, siloxane and ethicone, are another common shampoo moisturizer.

The presence of silicones in a shampoo alone doesn't tell you what performance you're going to get, says Thomas, so consumers should pick a shampoo geared toward their hair type. Particle size and molecular weight do make a difference — large-particle silicones will weigh the hair down, for example, so they don't work as well for fine-haired people.

Hair naturally has a negative charge — sort of like static electricity — says Thomas, but this is insulated by our hair's protective lipid layer. Damaged hair has higher negative charge, and the hairs literally try to separate from each other, creating frizz. That's why hair care scientists have been working to include positively charged detergents and silicon molecules in shampoos, conditioners and detanglers. The idea is that these bond to the hair — opposites attract — reducing negative charges and helping the hair lay down better.

Humidity also increases frizz; when hair absorbs moisture, it swells, which exaggerates any rough patches along the hair strand, causing it to rub against its neighbors. Damaged hair is more prone to becoming frizzy because it absorbs more moisture.

It's not as simple as reading the ingredients and choosing one set of ingredients over another. Just as custard and eggnog have the same ingredients but very different results, says Thomas, the success of shampoo depends on selecting and fine-tuning the balance of its ingredients.

With a few exceptions, you do get better performance from hair products if you pay more, says Ralf Zissel, a chemist who has developed shampoos for a range of companies. But you won't damage your hair using a less expensive shampoo, says Hanjani. Most shampoos have similar, mild ingredients.

The bottom line: The best way to know if a shampoo works for you is to try it and see if you like the results.