Accessibility links
A Hair Mystery: Curly Hair Gone Straight Some people have straight hair and want curly hair. Others have curls and iron them out. But for a few people, their hair actually changes shape and texture on its own — and not just because of the weather. 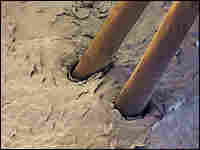 This microscopic view shows human hair emerging from the skin. The shape of the hair follicle (below the skin's surface) determines whether the hair will be curly, wavy or straight. David Scharf/Corbis hide caption

Web Chat: How Often Should You Shampoo?

The reason for your lackluster locks? You may be washing your hair too much. See what the experts had to say in response to your questions.

Some people have straight hair and want curly hair. Others have curls and straighten them out. But for a few people, their hair actually changes shape and texture on its own — and not just because of the weather. Scientists don't know exactly why this happens, but it probably has to do with a combination of genetics, hormones and body chemistry.

"Every seven to 10 years, my hair tends to change texture, going from straight to wavy to curly," says Kimberly Fasting-Berg, a marketing executive in New York City.

Judy Butler, a midwife in Tucson, Ariz., also has hair that's gone from straight to curly and vice versa, so when she saw changes in the hair of her three kids she wasn't surprised.

Curly locks have always sprung from my head, so I wondered, how often does hair change, and could it happen to me?

I set off on a quest to find out.

Searching For Hair Clues In Our Genes

First I started with Dr. Barry Starr, a geneticist at Stanford University. He told me most people's hair doesn't change from straight to curly.

"If your mom gives you a curly version of the gene and so does your dad, you end up with curly hair. If both parents give you the straight version you end up with straight hair," Starr says. And if one gives you curly and the other straight, you could wind up with something in between.

But, he couldn't tell me why some people go through a hair transformation. "It is an interesting genetic question, but I don't think there is an answer yet — and there may not be," he says.

What Shapes Our Hair?

The next person I called is Dr. Paradi Mirmirani, a dermatologist in Vallejo, Calif., who specializes in hair. "We do know that curly hair has a different shape than straight hair," says Mirmirani.

That shape depends on the shape of the hair follicle. This tiny structure guides the hair fiber up a sort of tube as it grows. The inside of the tube determines if the hair is curly or straight — ovals produce curly hair and circular tubes yield straight hair.

"If you think about gift wrapping ribbon, when you try to make it curly, you take the scissors and you pull it on one side, so you kind of flatten the one side and it curls. So you're changing the shape of one side compared to the other," says Mirmirani. "When it's oval, one side is curved and the other side is flat, which makes it curl."

So if your hair changes from straight to curly it suggests that the follicles must be changing, but Mirmirani couldn't tell me why that would happen, though she thought it could have something to do with hormones.

An Influence From Hormones?

After all, hair changes in other ways during adolescence or after having a baby, two events that generate hormonal changes in the body.

"Hormones are a logical guess but I have no evidence to prove that," says Dr. Val Randall, an endocrinologist at the University of Bradford in England.

Randall is one of the few people doing research on hormones and hair. She says it is difficult to figure something like this out because it doesn't happen very often.

But, says Randall, change is possible because hair is always replacing itself:

If the new follicles grow back a different shape, then your new hair will be different, too.

Hair Care From The Inside-Out

I made at least a dozen more calls but I couldn't find anyone who knew more about the curly-straight question. I did find out that there is an entire industry working on it.

"There are multimillion-dollar research projects going on looking at how to change hair shape because this would be a billion-dollar business," says Dr. Zoe Draelos, a dermatologist in High Point, N.C. Her research is supported by the cosmetics industry, which is looking beyond perms and irons. For the industry, figuring out a simple way to turn hair straight or curly would be a goldmine.

"Wouldn't it be great if you took a pill and your hair turned curly?" says Draelos. "I mean, can you imagine how that would revolutionize hair care, and then you could take another pill, and you could reverse it the next day."

Until then, I think I will stick with my curls.