Accessibility links
Verdi's 'Il Trovatore' Verdi's Il Trovatore has a truly outlandish story, but its music has made it one of the most popular of all the composer's great operas. World of Opera presents it in a production from Houston Grand Opera. 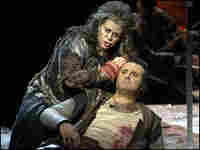 Azucena comforts her son Manrico, who has been wounded — but before long she'll rejoice at his death. Irina Mishura plays Azucena and Marcello Giordani is Manrico from Houston Grand Opera. Photo: Brett Coomer hide caption

For better or worse, Verdi's Il Trovatore has everything a prototypical, or even a stereotypical opera is often assumed to have: Brilliant vocal lines – and a weirdly implausible plot. Compelling dramatic action – and a basically incomprehensible plot. Shatteringly beautiful music – and a totally ridiculous plot. You get the idea. Or, more to the point, you might listen to the opera and not get the idea. For all its beauties, Trovatore can be that confusing.

But when it comes to that muddled plot, maybe the opera has gotten a bad rap. Maybe it's not the story of the opera itself that's so confusing. Instead, perhaps the confusion lies with the complicated "back story" – the stuff that happens before the opera even starts, to set up the action. At the very beginning of the opera, a minor character gives us that information in a long monologue — and it's so complicated and implausible that listeners may wind up confused before the real plot ever gets going.

So, we'll try to make that back story easier to swallow by updating it a little – by translating it into events that might happen today. Here goes:

An aging woman runs a day care center. One of the children she cares for is the son of a well-known and popular politician — a big shot. Unfortunately, the young boy dies, accidentally, while in her facility. The woman was not at fault, but the politician needs a scapegoat. He hires expensive lawyers and brings charges. In court, the woman doesn't have a prayer. She's convicted, sentenced to death, and sent to the electric chair.

Her daughter witnesses the execution. She's a wild-eyed young woman with an infant son of her own, and she vows revenge. Soon after, the politician's other son, a baby, disappears from his crib. Small, charred bones are discovered in a junkyard incinerator. Authorities believe the daughter kidnapped and killed the child, but she's long gone.

What really happened is this: The vengeful daughter did kidnap the baby, intending to burn him alive to avenge her mother. She drove to the incinerator, bringing her own child along. But in her blind rage, she grabbed the wrong baby from the car, and tossed her own son into the flames. The shock of the dreadful mistake tempered her anger, and to make up for her loss she decided to raise the kidnapped boy as her own. So now, unknown to the big shot, his supposedly murdered son is being raised by the suspected murderer.

OK, so the updated story is hardly more plausible than Verdi's version. It sounds like a bad TV movie. But, consider this: A woman is mad with fury and kills her own son by mistake when she meant to murder the son of her enemy. Why on Earth would she show mercy toward the surviving baby, and raise him herself? Wouldn't he go straight into the flames as well? Mull that over while you're listening to Il Trovatore. Concentrate on the actions of Azucena, the vividly drawn Gypsy character. Observe the grisly, ultimate fate of her "adopted son." Then decide whether maybe — just maybe — Azucena was anything but a devoted mother, and intended him for the chopping block all along.

This week on World of Opera, host Lisa Simeone brings us Il Trovatore — an outlandish story set to some of Verdi's most glorious music — in a Houston Grand Opera production starring Irina Mishura as the wily Azucena and Marcello Giordani as the ill-fated adoptee.

The Story of Verdi's 'Il Trovatore' 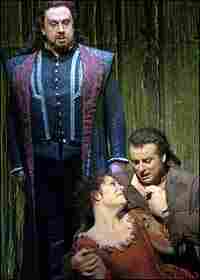 In the early 1850's Giuseppe Verdi had consecutive hits with the sensational Rigoletto and the even more lurid Il Trovatore. Getty Images hide caption 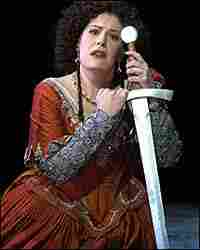 Leonora knows she can save Manrico, whom she loves, but only by giving herself to a tyrant she despises. Photo: Brett Coomer/Houston Grand Opera hide caption

BACKGROUND: For five years, starting in about 1850, Verdi was on a roll. He wrote three consecutive operas that have been drawing enthusiastic crowds ever since: Rigoletto, Il Trovatore, and La Traviata.

Trovatore actually started life with a completely different title. Verdi got the idea for the opera from a Spanish play with that same name. But Verdi didn't think of the title character, the Troubadour, as the star. Instead, Verdi started out calling his new opera La Zingara — The Gypsy — in honor of the unconventional character of Azucena. She's so powerful and compelling that it's easy to understand why Verdi was taken with her.

Trovatore was first performed in Rome, in 1853. It followed up on the enormous success Verdi had with Rigoletto, an opera about a half-mad hunchback who inadvertently has his own daughter murdered and unsuspectingly discovers her corpse when he cuts open a burlap sack. Trovatore was a bigger hit and, if anything, it's even more sensational, with its story of kidnapping, beheading, burning babies and bloody revenge.

Part One, The Duel: The story takes place in the Spanish kingdom of Aragon, early in the 15th century. Spain is embroiled in a civil war. The opera opens as an old soldier named Ferrando tells his troops about the sad family history of their commander, Count di Luna. The count had an infant brother. One night, the baby's nurse woke up to find a gypsy lurking over the cradle. When the child became sick soon afterwards, the gypsy was blamed, and the Count had her burned at the stake. As she was dying, she urged her daughter to take revenge. So the daughter kidnapped the infant and, according to Ferrando, burned him at the very stake where her mother died. That's the story, anyway. But the Count, Ferrando says, hopes his brother might still be alive.

The following scene is in a palace garden. The aristocrat Leonora tells her lady-in-waiting, Inez, that she's in love. Leonora says she went to a tournament, and fell for a brave young knight whose face remained hidden behind his armor. His name is Manrico. She hasn't seen him since, but sometimes she hears him singing serenades beneath her window. The Count di Luna arrives to court Leonora. At the same time, Manrico begins another serenade. The Count is jealous, and challenges Manrico to a duel.

Part Two, The Gypsy: In a gypsy camp, everyone is at work, singing the famous "Anvil Chorus." Azucena nurses her son, Manrico, who is wounded. She tells the story of her mother, who was blamed for a young boy's death and burned at the stake. Azucena says she then kidnapped the boy's infant brother, intending to burn him in revenge. Manrico is horrified when Azucena goes on to say that, in her delirium, she mistakenly grabbed her own baby and flung him into the fire.

Distraught by this gruesome memory, Azucena makes Manrico swear to take revenge on Count di Luna. He says that he was once in a position to kill the Count in battle, but something — a voice — made him stop. His story is interrupted by a messenger, bringing news that Leonora has been told that Manrico is dead. In despair, she has decided to enter a convent. Manrico rushes off to stop her.

Meanwhile, Count di Luna has also learned of Leonora's plans. He's waiting outside the convent, planning to kidnap her, when Manrico arrives and intervenes. His men overpower Count di Luna while he and Leonora escape.

Part Three, The Gypsy's Son: The Count is ready to attack the castle where Manrico and Leonora are hiding. Then, the old soldier Ferrando enters, with Azucena. He found her snooping around the camp, and has brought her to the Count. Ferrando recognizes Azucena as the very woman who kidnapped and, he thinks, murdered the Count's infant brother many years ago. Count di Luna orders her burned at the stake, just as her mother was.

Inside the castle, Manrico and Leonora are preparing to get married when they learn that Azucena has been captured and condemned. They can all see the pyre in the distance, already burning. Manrico and his men rush off to save her, as Manrico sings the brilliant aria, "Di quella pira".

Part Four, The Execution: Manrico is now a prisoner of Count di Luna. To save him, Leonora offers herself to the Count in exchange for Manrico's freedom. When the Count agrees, she secretly swallows poison and rushes to the prison cell where Manrico and Azucena are trying to comfort each other.

Leonora tells Manrico that the Count has agreed to his release, and that he should flee. Manrico wonders out loud what Leonora did to win the Count over. When Leonora breaks down and tells him, he denounces her. But the poison has already started to take effect and Manrico watches helplessly as Leonora dies.

The Count arrives and realizes what has happened. He orders Manrico to be put to death. Azucena watches as Manrico is led to the executioner's block. Just as the ax falls, she turns to the Count and cries out that her mother has finally been avenged. "You," she tells him, "have just killed your own brother." Throughout the opera, Azucena has seemed devoted to Manrico. But she's also been leading him to this end the entire time. It's only now, as he's beheaded, that she finally seems triumphant.