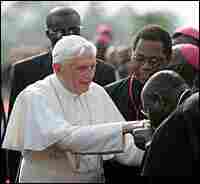 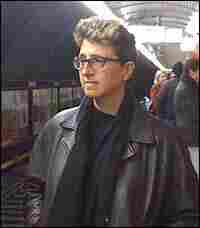 Nancy Goldstein is a writer and communications consultant who lives in New York. She blogs regularly for Salon's Broadsheet and is the co-editor of The Gender Politics of HIV/AIDS Emily Winkelstein/Courtesy of Nancy Goldstein hide caption

Earlier this week, Pope Benedict XVI began his first tour of Africa as pontiff by telling reporters that the continent's HIV pandemic couldn't be resolved with the distribution of condoms. "On the contrary," he said, "it increases the problem." The pope suggested, instead, that a responsible and moral attitude toward sex would help fight the disease.

He's spot-on about the first part. Distribution of condoms alone won't solve the problem. But rigorous scientific studies have repeatedly proven that, when properly used, latex condoms are one of the most effective ways to stop the transmission of HIV. Condoms are useless in their wrapper. Much more is needed to get people to use them.

Access to health care and education, for one. Information about how people can protect themselves and their loved ones against HIV transmission — and yes, that includes learning how and when and why to use condoms. Viable drug treatment on demand, syringe-exchange programs and other harm reduction measures. And a sea change in the status of women and men who have sex with men — in Africa, in the U.S., everywhere. Let's face it: Anyone who is dependent on others for money, shelter, protection or status isn't in much of a position to negotiate condom usage. Add children, addiction, homelessness or domestic violence to this problem, and preventing HIV drops to the bottom of that person's list of priorities.

The pope is right: Condom distribution alone won't do it. But he's absolutely wrong to say that condoms "increase the problem."

People aren't going to stop having sex. Access to condoms won't make them have more sex. And denying people access to condoms, or to accurate sexual information, won't make them have less sex. Here in the U.S., the federal government just spent a decade and $1.5 billion foisting abstinence-only-until-marriage programs on teens. Too bad. In late 2007, a scientific study authorized by Congress said they didn't work. There was no real difference in when participating teens first had sex, or whether they had sex before marriage, or in their number of sexual partners.

The Bush administration imported this same ineffective approach for years. The President's Emergency Plan for AIDS Relief (PEPFAR) insisted that up to two-thirds of the money granted go to abstinence and faithfulness programs. Preaching fidelity won't protect a woman from HIV in sub-Saharan Africa because a woman's primary risk for HIV may be from unprotected sex with her husband. And 75 percent of new infections in the region are among females ages 15 to 24.

And now here's the pope with the same failed message for a continent that literally worships him. Africa is one of the fastest-growing regions for the Catholic Church. It's also where three-quarters of all AIDS deaths worldwide took place in 2007. Warning people away from using condoms could kill thousands more.

I agree with the pope that sub-Saharan Africa is a place where a genuinely responsible and moral attitude toward sex would do a great deal of good. For starters, he could choose compassion over dogma: accept that people have sex and that marriage isn't a condom. That would be a significant step forward in his claims to be on the side of life.

Nancy Goldstein is a writer and communications consultant who lives in New York. She's a regular contributor to Salon's Broadsheet and the co-editor of The Gender Politics of HIV/AIDS in Women.