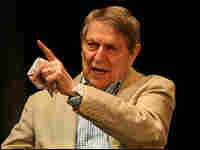 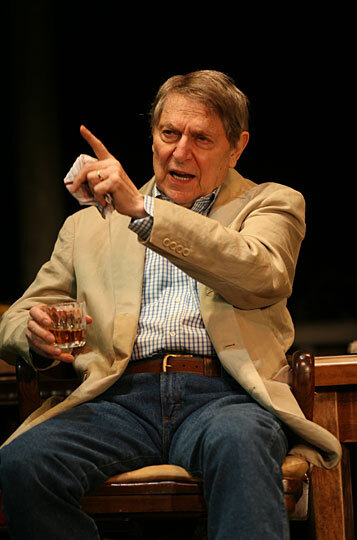 John Cullum's hectic performance schedule begins with August: Osage County, at Broadway's Music Box Theatre on 45th Street. The curtain goes up at 7:30, and he's in the opening scene. 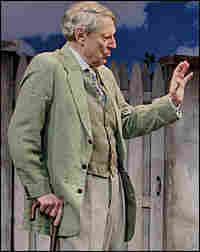 Done with August by 7:55, the 79-year-old actor hustles across midtown to make the 8:30 curtain for his second play, Heroes, at the Harold Clurman Theatre on 42nd Street. Theresa Squire hide caption 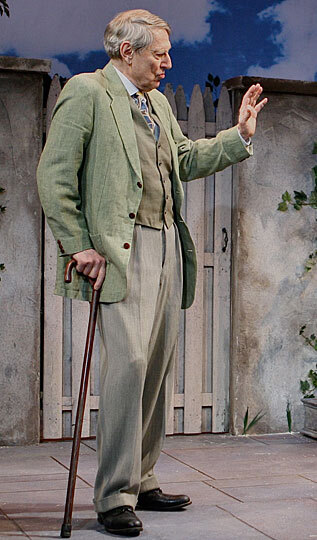 Done with August by 7:55, the 79-year-old actor hustles across midtown to make the 8:30 curtain for his second play, Heroes, at the Harold Clurman Theatre on 42nd Street.

John Cullum is probably best known for TV roles on the quirky '90s dramedy Northern Exposure and on NBC's long-running ER. But for the last 50 years, he's been a working New York actor, winning two Tony Awards and starring in countless musicals and plays.

And these days, he's really working — performing in two plays a night, six nights a week.

By 6:30 p.m. on a recent Wednesday evening, Cullum has already had a long day. He's performed in the matinee of August: Osage County on Broadway, and he's also had a rehearsal for his off-Broadway show, Heroes.

Now it's time for the evening performance of August. Cullum signs in at the stage door of the Music Box Theatre, where the Pulitzer Prize-winning show is playing, then briskly climbs up the backstage stairs to his tiny dressing room.

"I generally go down at five minutes, pour myself a glass of water and go over the lines," he says. "Peek out and look at the audience — which is, supposedly, very unprofessional. I always do it surreptitiously."

In August, Cullum plays the patriarch of a highly dysfunctional Oklahoma family. Tracy Letts' tragicomedy runs for more than three hours, but Cullum appears only in the first 15 minutes — it's his character's disappearance that jump-starts the story.

"Even though it's not a big part, it hovers over the play," he says.

Because he finishes hours before all the other actors, Cullum generally doesn't stick around for the curtain call — which is what enables him to do double duty, performing in Heroes, later in the evening.

Cullum changes from jeans and a pullover to his first costume: jeans and a plaid shirt. It's 7:35, time for August's curtain to go up. Fifteen minutes later, he's back in his dressing room. Quickly, he changes back into his street clothes, and we hustle downstairs to 45th Street.

Across Midtown, Through Decades Of Theater History

It's 7:55, and theatergoers are rushing to get to their 8 o'clock shows. We're rushing, too — to Eigth Avenue and around the corner headed downtown, past theaters where Cullum has performed.

"That's where Camelot was," he says, indicating the Majestic Theatre. "My first Broadway show."

On the opposite corner, we pass the St. James, where he won a Tony for the 1978 musical On the Twentieth Century. We're really moving now. Cullum is 79, but I'm struggling to keep up.

"We're just catching the lights," he says. "I catch the lights the way I catch 'em. It takes 12 minutes to walk briskly from down there at the Harold Clurman, Theatre Row, to the Music Box. It takes about 11 minutes, usually to go in [this] direction, because it's got a slight downhill."

We cross Eighth Avenue. Cullum's carrying his script for Heroes — a French play about three World War I veterans — in a Northern Exposure shoulder bag. I ask him if people ever stop him on the street because they've seen him on TV. He says very rarely — people in New York generally leave him alone.

But the power of television does impress him.

"More people see you in one episode of a big TV series than will ever see you [in] your entire career onstage," he says. "Something very strange about that. But look at how many actors come back to New York to recharge their batteries, so to speak. Or else they just want to do stuff onstage, because there's nothing quite like performing in front of a live audience. It's infectious."

We arrive at the stage door of the Harold Clurman Theatre, huffing and puffing. Curtain time for Heroes is 8:30. Cullum waves at the doorman, then looks at his watch. It's 8:09.

We walk through a twisting passageway to the dressing room, where Cullum's fellow actors, Jonathan Hogan and Ron Holgate, are already in costume. As Cullum hurriedly puts on a jacket, vest and trousers, they all run their lines. And it's time for play number two — and he still has to pick up all his props.

"It's a long day, there's no question about it," he says after the show. "But, I can generally handle that sort of thing."

And so at 10:15, Cullum gets back into his street clothes, pulls a half-eaten sandwich from the fridge and leaves the theater to go home for a good night's sleep.

He'll need it: His midtown-Manhattan commute will be happening, like clockwork, six nights a week until Heroes ends its limited run on April 11.