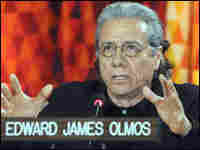 Edward James Olmos and other stars of TV's Battlestar Galactica met Tuesday with United Nations representatives for a panel exploring issues of human rights in armed conflict — and how the show might offer wisdom on these real-life issues. SciFi Channel hide caption 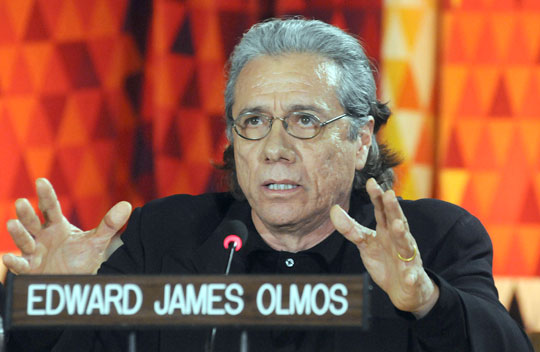 Edward James Olmos and other stars of TV's Battlestar Galactica met Tuesday with United Nations representatives for a panel exploring issues of human rights in armed conflict — and how the show might offer wisdom on these real-life issues. 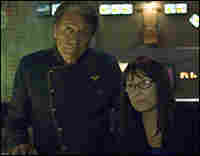 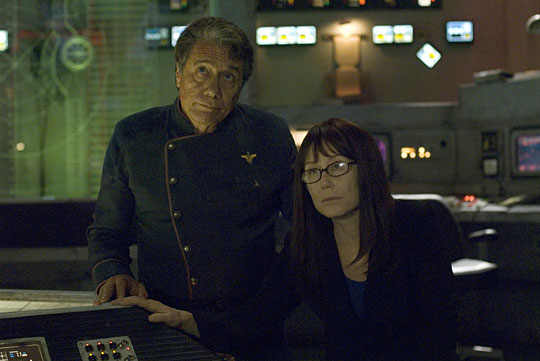 Over the past five years on television, there's been a rigorous, messy, emotional exploration of important questions facing our country and the world — questions about torture, religious fundamentalism, resistance and genocide.

We're not talking about Frontline. Or Nightline. This is Battlestar Galactica, the SciFi channel's brooding, often brutal re-imagining of the cheesy '70s-vintage series.

Again and again, the writers and producers of BSG have put a civilization in immediate peril and asked how far its leaders ought to go to protect it. Tonight, the story comes to an end with the critically acclaimed series' final episode.

To mark the show's finale, its fans at the United Nations — people whose nonfictional jobs involve wrestling with similar issues day in and day out — invited the cast and producers to visit the U.N. for a two-hour panel discussion and talk-back.

On Tuesday, some 500 people took seats in the chamber, a stiff, formal space with miles of dull, blonde wood. (Delegates have come from some exotic-sounding, faraway places to the U.N. building in Manhattan, but it was probably the first time they were there representing other planets.)

Take the third season, which hit the air in 2006. Here in the real world, that was a particularly bloody time in the Iraq War. On Battlestar Galactica, the surviving human population of the Twelve Colonies — the show's heroes — were the insurgents fighting a resistance against an occupying army of Cylons.

"We were in the midst of a war against an enemy which employs suicide bombers," says Anders. "[And on the show,] the protagonists turn into terrorists — and bomb not only the Cylons, but their own people they view as collaborators."

That's strong stuff for an American TV audience. But not simplistic stuff.

"I think the show tried very hard over the course of its run not to say guess what, here are the answers to these problems," says Eick. He emphasizes that the show wanted to raise questions about torture, nuclear war and how people with conflicting religious beliefs use them to shape political decisions.

McDonnell, whose character sacrificed thousands of innocent civilians, abolished reproductive choice, executed enemy combatants without trial and nearly stole an election over the course of the program, says she wanted to show that leaders who make autocratic decisions aren't always doing it just to be evil.

"People who are taking these actions — that are unacceptable — are sometimes in positions where they don't see the solution," she says. "The experience of that is what we wanted to expose to our audience."

McDonnell hopes that dramatizing the way decent leaders can come to wrong decisions in tough situations will create more of a dialogue about other ways to use power.

Although debates about terrorism and human rights have receded to the background for many Americans, Battlestar Galactica may help the U.N. meet the challenge of reaching a broader audience.

Naimah Hakim, a 16-year-old sophomore from Westchester, was one of a hundred New York high-school students in attendance. To her, the show brings home issues in a way that most of her classroom lessons don't.

"When you're watching the show, you don't question why you have to learn it," she says. "You understand because it's something that hits the nail on the head."