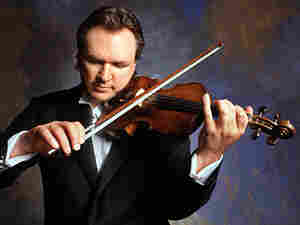 Mark O'Connor is an acknowledged master folk fiddler, but his musical interests have also led him into classical music's concert halls. He's written violin concertos and chamber music performed by some of today's top classical musicians, such as Yo-Yo Ma, Renee Fleming and the Eroica Trio.

O'Connor says that over the years, a central idea in his music was growing.

"I was starting to uncover this idea that in the music of the West — in motion, in journey, looking for wide-open spaces — was this theme that I kept returning to," O'Connor says. "And I realized that's why American music sounds so optimistic; it's because this country is unique in that regard, that people actually do believe that tomorrow could be better here."

That kind of attitude helped fuel America's great westward expansion, and the idea of that journey informs Americana Symphony.

"I have sections in here where I see the dust being kicked up by the wagons heading across the prairie," O'Connor explains. "The connotation of the music heading west is not only what happened in our settling of this country but is a cultural backdrop for the music styles that were developed here. So if there was no westward expansion, then we wouldn't have, say, Texas fiddling and Texas-style Western Swing and other styles of Americana."

One of the most visual sections of the symphony is the fifth movement, "Soaring Eagle, Setting Sun," which depicts the climbing of the mountain face of the Rockies.

"The entire movement is one large crescendo that lasts six or seven minutes, that starts very low, in the basses where it's barely audible," O'Connor says. "And as the heavy footsteps climb that mountain, the music describes the elation once you're at the peak and you can actually see the setting sun."

But O'Connor doesn't want listeners to think of his new symphony as simply some kind of PBS soundtrack to a chapter of American history.

"This is not a historic piece or a retro piece; this is our daily lives," he says. "We're still doing the same journey. We're still heading out of our homes, looking for a better life than our parents had. This journey here is the spirit of what we all do every day. What I'm trying to do with my music style is identify what has been overlooked for so many centuries in classical music, is our native language."