Accessibility links
Movie Review - Spies Like Us: 'Duplicity' Doubles Down On Deceit If you've been waiting for big stars to come back to the movies, your wait ends today. Julia Roberts and Clive Owen are back in a twisty corporate espionage thriller, and Kenneth Turan says it's worth the wait. 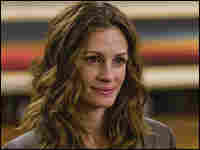 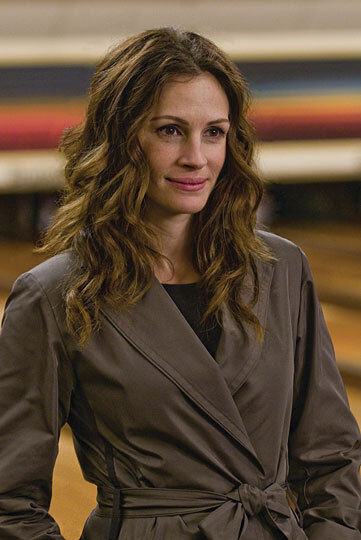 The only thing you can trust about Duplicity is its title. It's a throwback to the days of old school caper movies like To Catch A Thief.

It's also just the kind of sophisticated amusement you would expect from filmmaker Tony Gilroy, who wrote the Bourne films and made his directorial debut with Michael Clayton.

In Duplicity, he has done a lighter-side version of the latter: Back we go to the dog-eat-dog world of corporate malfeasance and industrial espionage. Only this time, it's played for laughs and romance.

Julia Roberts is a CIA officer and Owen is an MI6 agent. They've decided to go private and run an elaborate scam that takes advantage of a war between rival corporations. The question is: Can they trust each other enough to allow that to happen?

Even if you beg, I'm not going to tell you any more. All I'll say is that Duplicity's plotting is dazzlingly complex, full of turns inside twists and twists inside turns. It makes your head spin like an amusement-park ride you can barely hang onto, something that needs to be experienced to be appreciated.

And no disrespect to Roberts and Owen, but the real star here is Gilroy, a writer-director with a gift for updating classic Hollywood with smart and sophisticated contemporary touches. He has written fine dialogue of all sorts, from repartee to romance to comedy and tension, and he has directed with snap, energy and playfulness. Everything in Duplicity may be a scam, but Gilroy's talent is the real thing.