Accessibility links
'A Show With A Mission' Comes To An End News & Notes executive producer Nicole Childers and senior supervising producer Christabel Nsiah-Buadi talk with Tony Cox about the broadcast's culmination and the show's mission to "illuminate the diversity of the African-American experience."

News & Notes executive producer Nicole Childers and senior supervising producer Christabel Nsiah-Buadi talk with Tony Cox about the broadcast's culmination and the show's mission to "illuminate the diversity of the African-American experience." 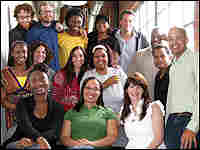 The staff of "News & Notes" photographed outside Studio B. Melissa Kuypers/NPR hide caption

Now, no shall can run without managers, and we have two of the best, Christabel Nsiah-Buadi, our senior supervising producer, and Nicole Childers, the executive producer of News & Notes. They've joined me in the studio. So, what's it like, Christabel, from your perspective? Putting together a show like this, how difficult and important is it?

CHRISTABEL NSIAH-BUADI: It's not that difficult actually in the sense that I feel very passionately about the content that we've put together over the past few years. In terms of putting things together, the actual elements, it's been challenging at times but we have a fantastic team of producers who've really stepped up to the plate on a regular basis to produce some fantastic programming. So, it's been easy but it's been hard at the same time.

COX: It is. And you really are - people should know you are one of the most organized producers I have ever worked with.

COX: And, you know, that makes the show run smoothly when, you know what's going to happen. But the buck stops not just at Barack Obama's desk, it stops at the desk of Nicole Childers because you are responsible for getting all of us in here, getting things done, fighting the fight sometimes with NPR and others to make sure that this show happens.

CHILDERS: Yes, indeed. I am.

COX: And we're glad that you did it.

CHILDERS: It was - it was definitely tough but also very rewarding. When I look at the span of - I've been with the show for about almost four years, and looking at I came in during Ed Gordon times. And I'm just immensely proud of our team and what we've been able to accomplish because there - doesn't really exist a show like News & Notes. And so, you know, as we close this chapter and walk away, I think we have quite a bit to be proud of.

COX: I'm going to ask you straight out, both of you. Do we need a black show or do we not need that? Are we post-racial in this business like the people say because of the new president?

CHILDERS: I don't think so. I mean, if you look just simply at the population of the United States, you know, the census report said African Americans are 13 percent of the U.S. population and 40 million African-Americans in this country, and those numbers alone explain the relevance. And also when I think about the outpouring of support that we've received from not just black listeners but white listeners and listeners of every race talking about what they've learned from the show, and many African-Americans talking about how this is the first show that's really spoken to their experience, you know. And that really speaks to what our mission statement has been to illuminate the diversity of the African-American experience. So, yes, that's very necessary.

COX: Well, you get about 30 seconds or so to answer. I've said that to guests many times.

COX: And now I get a chance to say it to you.

NSIAH-BUADI: Oh, goodness. I do think that a black show is necessary and I think that all perspectives need to be heard from, you know, different points of view. And so I think we brought that. And I'm very, very sad to see the show go.

COX: We had a good group.

COX: We did good work. This is the most congenial atmosphere of any newsroom that I have ever been in that was multi-racial. I think that's important.

COX: And people need to know that we got along very well together. And I'll see you on the unemployment line on Monday.

CHILDERS: We'll be there.

COX: Thank you both.

Ms. JERMAINE JACKSON (Singer): Like a fool I went and stayed too long Now I'm wondering if your love's still strong Ooh, baby, here I am, signed, sealed, delivered, I'm yours! Then that time I went and said goodbye…

COX: That's our show for today, our final show. And we're glad you could join us. To listen to our archives of the show, visit our Web site, nprnewsandnotes.org. News & Notes was created by NPR News and the African American Public Radio consortium.