Accessibility links
The Recession And Pets: Hard Times For Snoopy When a family loses its home, a pet can lose its family. As the recession deepens, more pets are being turned over to shelters. A local Humane Society official says more animals are getting put down "because there just aren't enough homes." 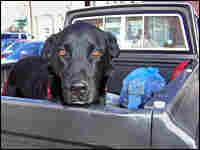 Snoopy, a 7-year-old Labrador retriever and shepherd mix. When Edward Jones lost his home, he had to give up Snoopy and Sheba (below). Courtesy Oregon Outback Humane Society hide caption 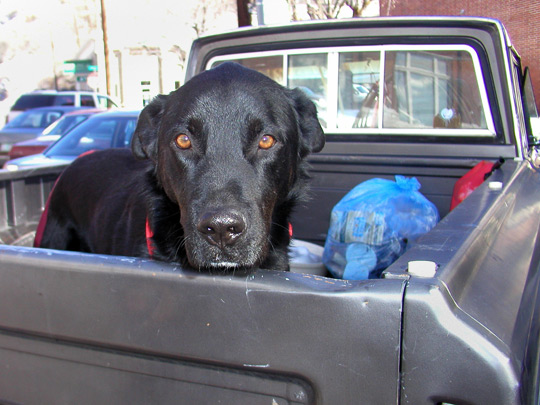 Snoopy, a 7-year-old Labrador retriever and shepherd mix. When Edward Jones lost his home, he had to give up Snoopy and Sheba (below). 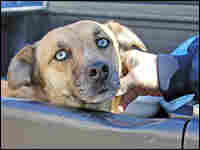 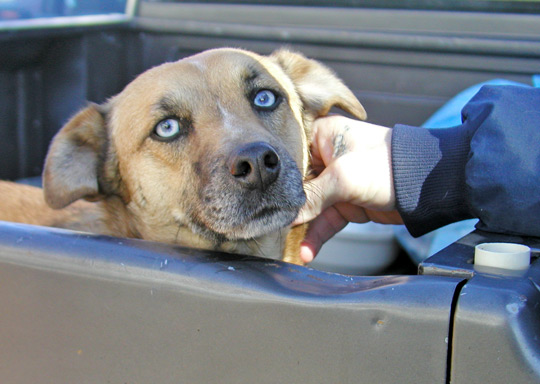 Because of the economic downturn, Americans are being ousted from their homes and, in many cases, forced to give up their pets for adoption.

Take, for instance, Snoopy, a 7-year-old Labrador-shepherd mix, and Sheba, a 5-year-old blue heeler mix. Their owner, Edward Jones, 43, was recently evicted from his rental house in Lakeview, Ore.

For the past seven years, Jones has had steady construction work pouring concrete. When the economy turned sour, he lost his job, then his $400-a-month home. "I couldn't make the rent. Couldn't do it. Couldn't do it," Jones says. Finally the landlord tossed Jones — and his two dogs — out on the street.

As stopgap lodging, Jones found a subsidized room at a local motel. But dogs are not allowed there. So, with tears in his eyes, Jones put Snoopy and Sheba in the back of his Jeep pickup, drove to the Oregon Outback Humane Society and gave his dogs up for adoption. "Hopefully," he says, choking back emotion, "they'll find a good home."

"The toll on pets is just as big as on people," says Dawn Lauer of the Humane Society of the United States. "We are seeing many more pets relinquished to shelters or abandoned because of the recession."

The organization became aware of the problem in 2008. Across the country, animal shelters were overwhelmed by pets that were being surrendered by their owners. In response, the HSUS set up a "foreclosure pets fund" that provides financial aid to pet owners who are facing foreclosure or eviction.

To date, the society has distributed more than $100,000 to 57 organizations. Shelters and animal rescue clinics have used the grants — ranging from $500 to $2,000 — to set up pet food banks, to assist with the cost of temporary boarding and to help owners defray the costs of emergency medical care.

The Humane Society also maintains a Web site that encourages down-and-out people to hold on to their pets until the bitter end. It reminds folks that just because a family loses its home doesn't mean that the family's pet should be forced to lose both a home and a family.

"Abandoning pets, for any reason, is not only irresponsible — it is illegal," Stephanie Shain, director of outreach for companion animals at the HSUS, said in a statement. "Pet owners may feel financially unable to care for their pets or are overwhelmed by a sudden move, but there are many alternatives to leaving pets behind."

The society counsels pet owners to plan ahead, as much as possible, for economic disasters. Find pet-friendly housing, for instance. And cut costs whenever possible: Buy inexpensive toys and ask veterinarians to provide only the most basic vaccinations.

Veterinarians say they, too, are seeing the effects of the recession on pets. Several animal doctors who were interviewed for this story said owners have cut back on annual vaccines and preventive medicine.

The Journal of the American Veterinary Medical Association reported in March that the economic downturn is taking a toll on veterinary practices. Transactions at pet clinics have been "flat or falling" during the recent economic downtick, according to statistics from the National Commission on Veterinary Economic Issues and a study by Brakke Consulting, a Texas-based animal health care management consulting firm.

In the Brakke study, veterinarians reported a drop-off in visits. And they added that more owners who do bring their pets into clinics are choosing less-expensive treatments and are refusing or postponing services such as diagnostic procedures and certain nonessential measures.

Farm animals are also being adversely affected, says Chris Grover, a large-animal vet in Charlottesville, Va. "Farmers have been hit hard. I was called to see a down cow today. That's a cow that for some reason -– a broken bone, perhaps -– has fallen and cannot get up. Farmers are now asking, 'Is it worth spending $150 to try to get it up?' when it may only be worth a few hundred dollars as a cull cow. Just a year ago, it would have been worth much more."

In Albuquerque, the number of animals taken in by the local humane society in 2008 was up 400 percent over 2007, says Peggy Weigle, executive director of Animal Humane New Mexico. And the nature of the neglected pets has changed.

"In 2007," Weigle says, "virtually 100 percent of the animals here for our emergency pet sheltering services were brought in by victims of domestic abuse. Since 2008, calls I began to get were about people who have lost homes, apartments. They are living in cars, desperate to put their pets someplace safe."

Many of the more recent cases involve animals that are in good health. They are up to speed on their vaccinations and in many cases have been neutered or spayed. Their owners, Weigle says, are "between living arrangements."

Weigle's group, which just deals with dogs and cats, is privately run and does not receive city or state funding. Last year, the shelter took in 5,200 animals, Weigle says; 62 of those were brought in for emergency shelter service.

"The HSUS Foreclosure Pets Fund grant has helped us a lot," she says.

"We live in a fairly depressed region," Keil says. "Sawmills have been shut down and the economy has taken a dive. And we are starting to see an increase in owner surrender calls."

Last year, the Outback group took in 117 animals. This year, it's on track to receive a lot more. Two of the dogs that Keil welcomed recently are Snoopy and Sheba, the pets of Edward Jones. Keil says Jones had no other choice but to give away his dogs.

"We want to help people with pets keep those pets in their homes," she says. But from what she has seen so far this year, she is not optimistic.

In fact, she says the picture is worsening — nationwide. "There are more animals that are getting put down," she says, "because there just aren't enough homes."