Accessibility links
Video Game Grad Programs Open Up The Industry By focusing on games as a medium for artistic experimentation and collaboration, graduate programs in video game design are bringing change to an industry once known for its monoculture. 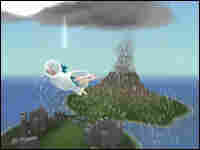 Kellee Santiago and Jenova Chen created the video game Cloud (above) while still in graduate school. Sony executive John Hight calls the game — which features a little boy who imagines flying out of his hospital room window and into the sky — a "Zen" experience. thatgamecompany/Sony hide caption 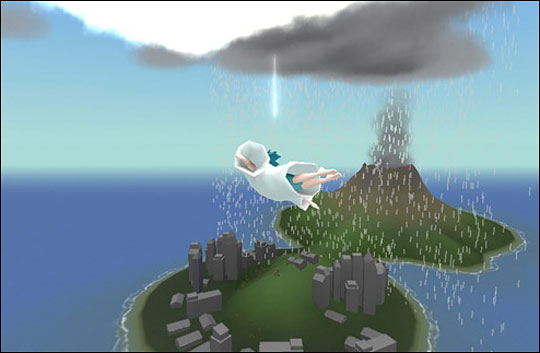 Kellee Santiago and Jenova Chen created the video game Cloud (above) while still in graduate school. Sony executive John Hight calls the game — which features a little boy who imagines flying out of his hospital room window and into the sky — a "Zen" experience. 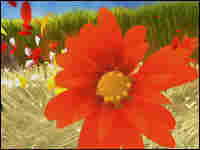 In the game Flower, the user is a stream of petals on the wind — navigating around electrical towers and other flowers. thatgamecompany/Sony hide caption 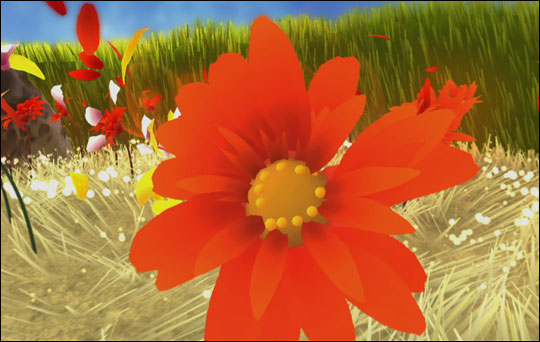 In the game Flower, the user is a stream of petals on the wind — navigating around electrical towers and other flowers.

Traditionally, video game designers learned their trade from other designers, a system that meant the people who made the games were often living in a monoculture. But that's changed recently; for the past five or 10 years, universities have been offering degree programs in video game design.

The programs are not about coding; instead they look at games as a medium for artistic experimentation and collaboration. And as students emerge, they are gradually making their mark on the industry.

Santiago grew up on Nintendo and spent some time doing experimental theater in New York before enrolling at USC. She says she played a lot of video games growing up, but never thought much about making them until she started classes.

"When I took the first game studies class we had, taught by Tracy Fullerton, that really opened my eyes up to, in a way, how video games were sort of the new interactive theater," she says.

Those games studies classes were also where she met Chen, who had come to the U.S. from Shanghai with the intention of studying computer science. He'd made games as a hobby when he was a teenager, but by the time he got to USC, he was disenchanted with them.

"Even though we grew up with games, at the same time, the gamers are actually outgrowing the games," he says. "Very few games have actually achieved those qualities that would be interesting to an adult."

Santiago and Chen decided to collaborate on games that would feel different. Their first game together, Cloud, features a little boy who imagines flying out of his hospital room window and into the sky, where he make shapes out of the clouds, moving white clouds over dark ones to keep the sky from raining.

John Hight of Sony stumbled across Cloud at a student showcase while scouting games for the PlayStation 3. Hight has been in the video game business for more than 20 years, and he knew he'd found something special. Cloud was nothing like the typical PlayStation 3 games, which include titles like Killzone 2, Street Fighter IV and Resident Evil 5.

By graduation day, Santiago and Chen had formed thatgamecompany with the goal of making video games that "communicate different emotional experiences" — and they had a three-game deal with Sony, for the PlayStation 3's downloadable service.

Their first game out of school, Flower, makes the player a stream of petals on the wind. You soar past flowers that burst into bloom when you go by, and navigate around a landscape of fallen electrical towers. Inspired by Chen's reaction to Southern California after growing up in the dense cityscape of Shanghai, the game is both serene and, at times, unsettling.

"It should feel like you have a backyard," says Chen. "It's a virtual backyard that leads you to the nature, even though you're living in a forest of skyscrapers."

Santiago adds that she and Chen think of a video game as a version of a poem: "By that we mean that it presents ideas to the player, but it also asks players to bring their own experiences to the table as well."

Poetry and experimental theater aren't traditional starting points for video games — and they probably would not have come into the industry if it hadn't been for the program at USC.

"The challenge when we started the game programs was to create the next generation of creative leaders," says Fullerton, Santiago and Chen's professor and mentor.

Fullerton says USC's program provides its students with the precious time to study the creative process, learn how to collaborate and to experiment.

"Commercial games cost so much to make and take so long to make [that the game-makers are] not free to take risks," Fullerton says. She adds that designers who work their way up in the industry are not free to "ask a question like, 'What if we made a game just about an emotion?' "

With a new generation that has been trained to ask such questions entering the industry, big changes are sure to come.