Accessibility links
Mexican Drug Cartels Recruiting Young Men, Boys Nearly 2,000 people have been murdered in Ciudad Juarez in the past 14 months, many of them just boys. Some 80 percent of the victims are younger than 25, and social workers say the violence is fueled by cartels recruiting younger members.

Second in a three-part series. 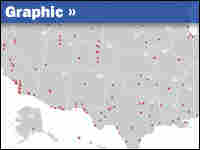 View locations of Mexican drug cartel presence in the U.S. 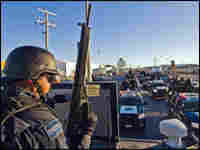 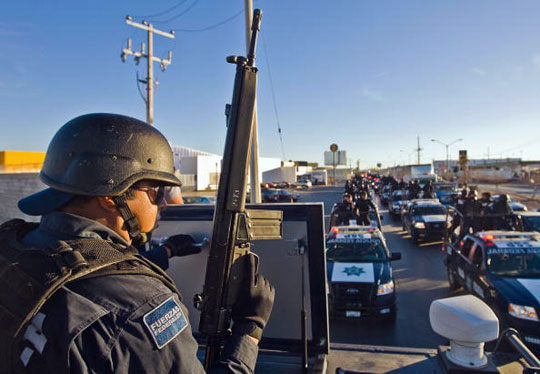 Mexican Federal Police personnel patrol the streets of Ciudad Juarez during an anti-narcotics operation on March 2.

Learn about the territories of Mexico's major drug cartels. 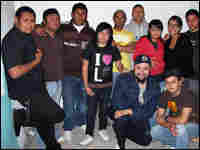 Members of Alta Tropa, or the High Crew, use creativity such as graffiti art, break dancing and hip-hop as an alternative to gangbanging. John Burnett/NPR hide caption 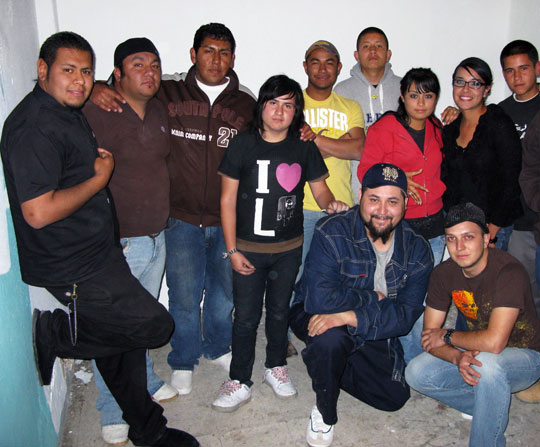 Members of Alta Tropa, or the High Crew, use creativity such as graffiti art, break dancing and hip-hop as an alternative to gangbanging.

The epicenter of violence in Mexico remains Ciudad Juarez, where nearly 2,000 people have been murdered in a mafia war in the past 14 months — many of them just boys.

There are so many murders that the new morgue is planning to double its size, and so many threats that the mayor recently moved his family across the river to El Paso.

Some 80 percent of the victims are younger than 25. Social workers say the violence is fueled by a disturbing trend: The cartels have begun seeking younger and younger recruits.

Soto, Daniel, Hector and Gerardo are just the kind of young men the cartels are looking for. They're residents — or, inmates — at the School of Social Betterment for Minors on the outskirts of Juarez. This is where the city sends its bad boys — the young killers, robbers, thugs and drug dealers.

"Sicaritos are children who are assassins, 13 or 14 years old," says Soto. "[The cartels] give them a weapon to use. It's easier for a boy. If he's older, he thinks too much — he may think about the consequences. But when you're young, you think you can take on the world."

Soto, 18, sits at a picnic table at the school. Like the others, he wears a hoodie and sneakers, and grins self-consciously. All four teenagers insist they never joined the cartels. Nonetheless, they all seem to have a thorough knowledge of their workings. Like every other young person in this story, they won't give their last names.

"To be an assassin, you can't think," says Daniel, 16. "You just do it, grab a pistol and go kill somebody, or whatever. It doesn't matter if you die or not."

Soto adds, "If you don't have a mother or a father, no one to believe in you, then it's easy to fall into this, to be a delinquent."

Mexican drug cartels recruit children under 18 for the same reasons that armed forces conscript boy soldiers in Sierra Leone and Somalia — their immaturity produces fearlessness. And for a young boy at the margin of society, cartel membership brings instant respect.

"You go with the guys who have the most power, money, connections and influence," Soto says.

Gerardo, 15 and pimply, chimes in, "When you run with those people, nobody says anything, especially not the police, because they're working for your patron, too."

Teresa Almada is the longtime director of the youth development center in Juarez called CASA.

"There are thousands of candidates in this city for recruitment, because of their level of social exclusion," she says. "They're young and poor and disposable."

The growing number of lawless youth in Juarez is intimately connected to the proliferation of narcotics. Juarez has now replaced Tijuana as Mexico's most drug-addicted city. A crackdown by U.S. and Mexican authorities has choked traditional smuggling routes. Consequently, the cartels have flooded the local market with marijuana, cocaine and heroin. More young people are selling, and using, than ever before.

Carlos is a freckle-faced heroin addict — 18 years old, though he looks much older. He hangs out with other junkies near the market in central Juarez. With a slurred voice and glassy eyes, Carlos says he came to Juarez last year from Guadalajara with the intention of sneaking into the United States and looking for work, but he couldn't get past the Border Patrol. So he stayed in Juarez where he lives in a grim, abandoned building reeking of human waste. He squeegees car windows and steals to get the money to buy the fixes he needs to shoot up every six hours.

This prosperous industrial city was supposed to be the economic model of a stable middle class. Migrants from throughout Mexico flocked here to work in the foreign-owned assembly plants. But the city can't accommodate its 1.3 million residents. There aren't nearly enough public schools, parks or youth programs. Children of the barrio are raised by siblings or in the streets, and they're ill-suited to repetitive work in the factories, or classroom study.

In Juarez, 1 out of 3 kids doesn't go to middle school, and attendance in high school is half the national average.

Into the void have stepped the cartels.

"Organized crime figured out the potential of young gang members and started recruiting," says Tony, a 26-year-old former gang member. "They realized that these boys could easily be channeled to do bad things, like homicides and assaults. The government's lack of commitment to young people in Juarez is to blame. These boys wouldn't end up like this if the system provided healthy activities for them."

Tony works with a youth group called Alta Tropa, or the High Crew, that uses creativity such as graffiti art, break dancing and hip-hop as an alternative to gangbanging.

Ciudad Juarez finds itself in a perfect storm for the conversion of young men into criminal psychopaths: poverty, insufficient schools, broken homes, a pervasive culture of violence, and the seductive, omnipresent pull of the narco-mafias.

On this night, a dozen motley members of Alta Tropa have gathered in a ramshackle house as a full moon rises over the desert metropolis. A big boy named Javier in baggy shorts and a backward baseball cap raps, while his homies smile approvingly. Others are silk-screening their designs on T-shirts.

At least the kids of Alta Tropa are trying to save themselves.