Accessibility links
Diets Rich In Red Meat May Be Risky A new study suggests that eating large amounts of red meat and processed meat may increase your likelihood of dying from heart disease and cancer.

Diets Rich In Red Meat May Be Risky

Diets Rich In Red Meat May Be Risky 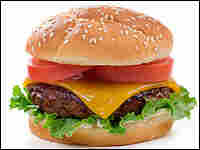 A federal study suggests that large amounts of red meat may increase the likelihood of dying from heart disease and cancer. iStockphoto.com hide caption

Eating large amounts of red meat may increase the likelihood of dying from heart disease and cancer, according to a large federal study of AARP members.

People who eat the highest levels of red meat and processed meats — such as hot dogs, bacon and cold cuts — are about 20 percent more likely to die of cancer compared with people who eat less than 5 ounces per week.

With heart disease, researchers found heavy red meat consumption increased the risk of death for men by 27 percent and for women by about 50 percent.

People whose diets included large amounts of white meat, like chicken and fish, had a lower risk of death.

The National Cancer Institute researchers say the increased risk of death is modest compared with other risk factors, such as smoking, and fit with previous research.

But Barry Popkin, director of the obesity center at the University of North Carolina, Chapel Hill, believes the findings are still significant. "It's a lot of deaths you save if you go from eating a Whopper once a day to once a week instead," he says.

Study subjects were recruited from AARP members, a group that's healthier than other similarly aged Americans. That means the findings may not apply to all groups.

In the analysis, the researchers took into account other risk factors such as smoking, a family history of cancer and high body mass index.

The study included some 545,000 adults who were surveyed about their eating habits. The major drawback of the study is that it relies on people's memories, which are not always accurate.

The National Cattlemen's Beef Association has questioned the findings, saying it is difficult to draw conclusions based on surveys.

The findings were published in Monday's Archives of Internal Medicine.