Accessibility links
The Ink-Stained Wretch: A Hero For The Times? Do you rue the demise of the daily newspaper? Wouldn't it be wonderful if a tattered superhero could come to the rescue, battling the evil Internet Wiz and his dastardly Hand-held Device? Well, keep reading ... but remember, it's just a comic-book fantasy.

The Ink-Stained Wretch: A Hero For The Times?

The Ink-Stained Wretch: A Hero For The Times? 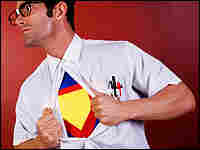 Will the Power of the Pen enable The Ink-Stained Wretch to prevail? Keep reading ... but don't hold your breath. Kris Hanke/iStockphoto.com hide caption 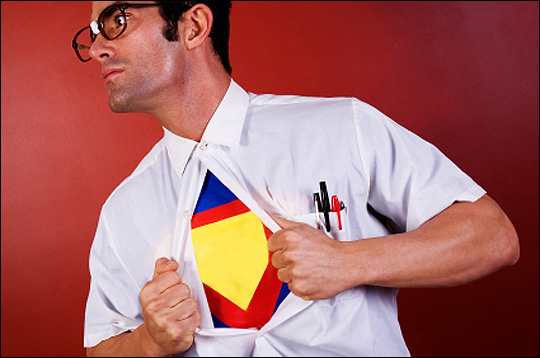 Will the Power of the Pen enable The Ink-Stained Wretch to prevail? Keep reading ... but don't hold your breath.

I'm the sort who dutifully reads the book first, so I have belatedly dipped into the much-admired graphic novel Watchmen before the movie comes to a DVD player near me.

The slightly seamy cadre of faded superheroes created by Alan Moore and Dave Gibbons left me drenched with nostalgia for the comics of my youth. Justice League of America, I do miss you so.

My hero is The Ink-Stained Wretch. And I would give him (or perhaps her) a simple, uphill battle to wage: Save my daily newspaper through daring exploits. Or dogged effort.

For as you'll recall from recent episodes, The Daily You Name It is headed for the dustbin of history, assailed by all manner of evil forces (and plenty of mundane ones, too).

Like all comic-book characters worth their salt, The Wretch has his problems.

His noble endeavors were once supported by an ample supply of funds provided by a mysterious organization known as The Classified Section, which traded on secrets delivered in a clipped, coded language.

Then came a series of foes, all with special powers.

The first to arrive was Radio Man, a persistent opponent capable of taking to the air at any moment.

In episodes 1960 through 2000, The Wretch was gravely wounded by Mr. TV, who introduced a startling new vehicle: The 24-hour News Cycle. That News Cycle pedaled (and peddled) over, around and through The Wretch's many 12-year-old sidekicks tossing papers once a day from sacks slung over skinny shoulders.

Worse was yet to come. How could The Wretch possibly hope to survive against the superior technology of the diabolical Internet Wiz and his futuristic weapon, Handheld Device?

Facing such archenemies, the stalwart Wretch is a lonely, quixotic figure, armed with the Power of the Pen and a Quill Full of Pointed Questions. He carries his trusty First Amendment Shield and uses the amplified Voice of the People in his quest to Speak Truth to Power.

And like so many other costumed crusaders before him, The Wretch has begun to realize that the people he seeks to protect don't really appreciate him.

Should they? Well, now, there's a pointed question.

Truth, after all, is rather a lofty goal, when the best of journalism offers but the first rough draft of history. Facts — however indisputable gathered one by one — are still just components of the truth.

The pen has little power if there's no money for ink. Questions are only sharp if the answers they evoke are blunt. We don't live in a world of blunt answers anymore.

Then, too, while news travels fast, conjecture and rumor and gossip move even faster. Lightning speed is one of the many dazzling powers wielded by Internet Wiz.

The hold-it-in-your-hands newspaper — lovingly "put to bed" once a day — was never a machine built for speed. It was for kitchen-table perusing and awkward subway folding and back-porch sitting.

Yet harsh realities are what make fantasies so gripping for those who never really wanted to grow up — or who walk through life looking back.

So go now, Wretch. Pull your green eyeshade down over your bloodshot eyes and battle for truth, justice and what — once upon a time — we believed to be the American way.

Vanquish your foes. Stand over them and spit out a trademark line: "Well, I guess I left him black and BLUE and read all over."

Then off to the pub to tip one or three with the linotypists and the rewrite boys and the bone-weary, seen-it-all editors — at least the ones who haven't sold out or been bought out.

I may never again have to wash your ink off my hands, my friend. But that ink will always be in my blood.

Todd Holzman is supervising senior editor for NPR's Digital News division. His origin was as a newspaper reporter and editor. He owns neither cape nor mask.