Accessibility links
Inside The Volcano's Plume, A Thunderstorm Rages Those dense, dusty toxic clouds around volcanic eruptions have hidden a secret from most volcano watchers for thousands of years: Inside the plumes, lightning-covered cyclones howl, spitting out waterspouts and dust devils.

Inside The Volcano's Plume, A Thunderstorm Rages

Inside The Volcano's Plume, A Thunderstorm Rages

Look out, Dorothy. There's a new cyclone in town. Using satellite images to peer down on volcanic plumes, researchers at the University of Illinois have discovered they're far more than just toxic clouds.

A volcanic plume is essentially a column of hot gases and dust, topped with a horizontal "umbrella." Volcano watchers described the general shape of these plumes as early as the eruption of Mount Vesuvius in A.D. 79. 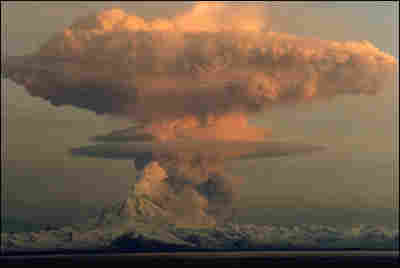 The cameras missed the volcanic plume when Alaska's Mount Redoubt erupted this week but captured a clear photo of a plume during Redoubt's last major eruption in 1990.

But what researchers didn't know until recently is that inside that umbrella-shaped haze of gas and dust, a lightning-covered cyclone rages, spitting out waterspouts and dust devils. The findings are described in the current issue of Nature.

Below is a photo showing the eruption of Mount Chaiten in Chile, capturing a rare look at a plume spinning around its vertical axis and enveloped in a sheet of lightning. 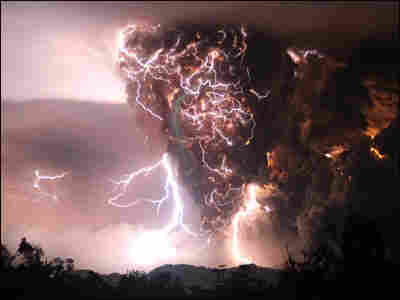 Look frightening? Imagine that you were a 19th century sea captain who happened to come across one of those bad boys in the middle of the ocean. The University of Illinois researchers, led by Pinaki Chakraborty, found a reference to this bizarre phenomenon in an obscure letter by Capt. S. Tillard, published in 1812. Tillard was navigating the seas around the Azores archipelago, 1,000 miles off the coast of Portugal, when a volcanic vent surfaced out of the sea. 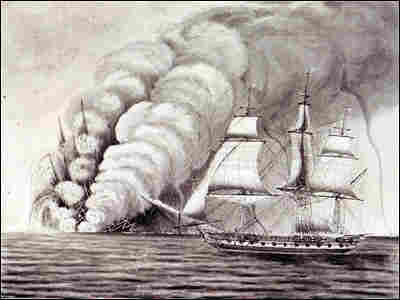 Drawing by Lt. John William Miles of the HMS Sabrina via Wikipedia Commons

A giant column started to rise, Tillard wrote, rotating on the water "like a horizontal wheel," surrounded by flashes of lightning. The column then "rolled off in large masses of fleecy clouds, gradually expanding themselves in a direction nearly horizontal, and drawing up to them a quantity of waterspouts."

When his team saw Tillard's description, Chakraborty says, "we realized it was similar to what happened in a thunderstorm." That led to a startling conclusion: Strong volcanic plumes act a lot like thunderstorms with tornadoes. 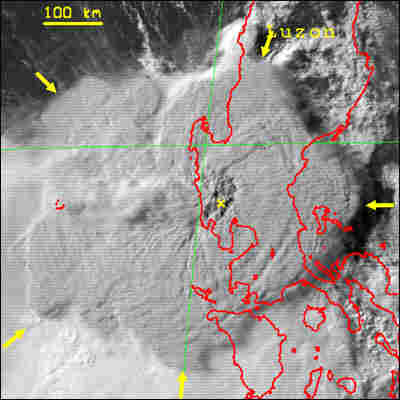 In this picture, Chakraborty sees more evidence of a volcanic plume's cyclonic action. If the plume weren't spinning around a vertical axis — like a cyclone — its top would look like a circle. But what you see instead are waves, or "lobes," around the edges, shown by the yellow arrows in the photo. Those waves are caused by the centrifugal forces of the vertical rotation, which create a wobbling effect.

Chakraborty says he hopes the radar technology used to study thunderstorms will now be used to reveal the secrets of volcanic plumes.