Accessibility links
'High School Musical' Graduates to Multimedia Hit High School Musical began as a modest made-for-TV movie about high schoolers producing their own musical. Now it's become a multimedia phenomenon. By this fall, more than 2,000 schools across the country will have staged the musical. 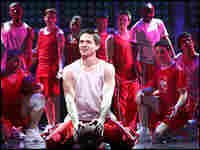 In High School Musical the character Troy (John Jeffrey Martin) is a basketball jock who discovers his passion for the stage. Photo: Joan Marcus hide caption 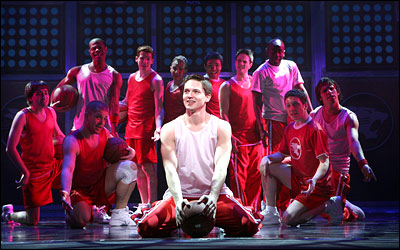 John Jeffrey Martin and ensemble cast in 'Get'cha Head In The Game' from an Atlanta production of High School Musical. 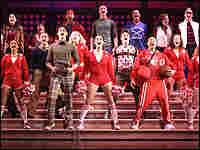 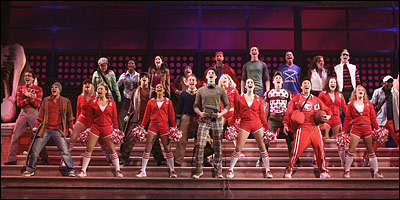 From an Atlanta production of High School Musical, the ensemble cast belts out 'Wildcat Cheer' from the bleachers.

High School Musical is a sweet, squeaky-clean story about a jock (Troy, the basketball star) and a brainiac (Gabriella, the shy transfer student) who both secretly harbor a desire to audition for their high-school musical. Will they or won't they? And what will their friends think? Mayhem and musical numbers ensue.

From the moment the modest little made-for-cable TV movie first aired, in January 2006, High School Musical has been a juggernaut. The soundtrack was last year's top-selling CD; the DVD has sold more than 7 million copies; an arena concert tour with most of the original cast barnstormed across the country last fall. More than 100 million people worldwide have seen the TV movie.

Now, High School Musical is jumping onto the stages of a high school or middle school or elementary school near you.

Steve Fickinger, vice president of Disney Theatrical Productions, says that shortly after the astonishing success of the cable movie, he and his colleagues fast-tracked a stage version.

"I thought, well, gosh, we have to have this out right away, because if we take our usual 12 to 18 months to write this and prepare the materials and to release it, the fever could be over," Fickinger says.

The phenomenon was on full display one recent weekend at Candlewood Middle School in Dix Hills, a Long Island suburb of New York City. Lucille Kenney, who's been directing the school's productions for the past 20 years, says more kids auditioned for High School Musical than any other show she's done.

"We had 235 auditions and we brought it down to 122, thinking that maybe some people might drop out," Kenney says. "But they didn't!"