Accessibility links
The Four Horsemen Of The Athletic Apocalypse Four big-name players regarded as locker room poison were banished by their teams, only to be given another chance. But will the recession change the attitude toward highly paid malcontents? Commentator Frank Deford says even announcers don't quite get how much players' self-aggrandizing behavior irks fans. 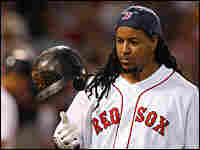 Manny Ramirez makes an out during his final at-bat as a member of the Red Sox on July 30, 2008. A former Boston teammate described Ramirez as a "cancer" on the team. Jim Rogash/Getty Images hide caption 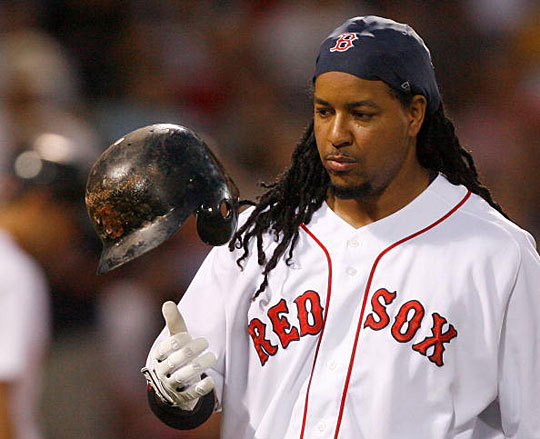 Manny Ramirez makes an out during his final at-bat as a member of the Red Sox on July 30, 2008. A former Boston teammate described Ramirez as a "cancer" on the team.

Each is a highly paid star in one of the four major team sports, and each is, on his own merits, a jerk of the first magnitude who is also locker room poison. Each has been banished by his team — the conclusion being: No matter how good he is, it ain't worth having him around.

But, then, this too: Each has been brought back, given another chance to again be a highly paid star — and to again be a jerk of the first magnitude.

There are, it seems to me, two lessons here. First, the fact that the teams were prepared to rid themselves of the malcontents, no matter what the cost, may indicate that teams have finally reached a point where the concern for clubhouse spirit and cohesion has been accorded due emphasis.

And second: Notwithstanding No. 1, there will always be somebody prepared to hold his nose and write a check for talent.

The cases of our Four Horsemen of the Athletic Apocalypse — selfishness, arrogance, narcissism and just-don't-get-it-ism — all at root have to do with how one Boston Red Sox teammate described what Ramirez was to the team: a "cancer."

The New York Knicks were so sick of Marbury that they made the decision to kick him off the team at the cost of a $22 million salary.

Avery reached such depths of tastelessness that he not only irritated his New York Ranger teammates, he publicly insulted former girlfriends.

Meanwhile, Owens wore out his welcome with the Dallas Cowboys, insulting his quarterback and anybody else not attuned to his special needs.

The fact that all four were deported hardly creates a groundswell, but I do wonder — for all the speculation about how the recession will affect sports financially, maybe these hard times have created a more significant attitudinal change.

When folks are having difficulty making ends meet, maybe they're not quite as tolerant of wealthy athletes acting so thoughtlessly toward their teammates, and by extension, toward team fans.

I certainly have this feeling, watching sports on television, that the announcers don't quite appreciate how much fans get irritated by the "me-me-me" behavior.

Watching football, I'd like to hear the analysts really criticize some goon hurting his team when he gets caught for gratuitous unnecessary roughness. And I'd like to hear baseball announcers make a point of criticizing hitters who stand at the plate instead of running hard to first.

My hero is Charlie Manuel, the manager of the Phillies, who once, last season, unceremoniously yanked the league MVP, Jimmy Rollins, out of the game when he didn't run hard.

Rollins is a team leader and a good sport. He accepted the blame and responded by playing harder. And it's the Phillies who are world champions.

A coincidence? Perhaps, but I heard that as a grace note among all the jerks beating their own drums.