The Auryn Quartet at the WGBH Studio in Boston. 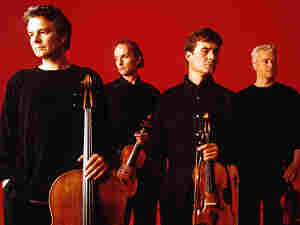 How do you transform four good players into an exquisite string quartet? Breathe. That's what the members of the Cologne-based Auryn Quartet told me when I asked what their students most need to learn. "They've got to learn how to breathe together," cellist Andreas Arndt said.

And while that sounds simple, it takes years and years of hard work. The Auryn Quartet knows all about it because Matthias Lingenfelder, Jens Oppermann, Stewart Eaton and Andreas Arndt have been breathing, touring, teaching and laughing together for 28 years. They named their group "Auryn" after the magic medallion in the German novel The Neverending Story by Michael Ende; in the book, a secret stone leads a daydreaming boy into a world of wonder.

The quartets by Haydn and Beethoven that the Auryns played at WGBH are both in F Major, written a little more than a dozen years apart. But I realized that comparing the slow movements is like hearing the string quartet itself break out of its classical box and dive into the stirring, intimate realms of what we now know as the "romantic" era. It's Haydn handing the reins over to Beethoven.

Haydn's slow movement (from Op. 50, No. 5) provided the inspiration for the quartet's nickname — "The Dream." And the music works with a miraculous simplicity: Two scales move at once; one rises and the other falls, like dreams rising up from a sleeping soul. It's both touching and intimate.

But Beethoven's slow movement (from Op. 18, No. 1) is twice as long. Its pulse is a heartthrob, which moves to strange harmonic places and disintegrates into troubling, heartbreaking silences. When someone close to Beethoven commented that the movement sounded like two lovers parting, the composer said that he had the tomb scene from Shakespeare's Romeo and Juliet in mind. Revolutionary writing. And Auryn navigated it perfectly, never overindulging in its sadness and never underplaying its intensity.

More About The Auryn Quartet

Any string quartet playing together for nearly three decades, like the Auryn Quartet has, possesses a certain sixth sense among its members in terms of phrasing, rhythm, dynamics and what each might order for lunch.

The danger is that players end up knowing each other too well, at which point the electricity fades or the in-fighting begins, or both.

But the Auyrn Quartet, after 28 years, manages to keep its sound fresh, even when engulfed in huge projects like recording all 68 of Joseph Haydn's String Quartets. The group has already recorded all of Beethoven's Quartets, and has played all of Haydn's in concert in Italy and its home base of Cologne, Germany.

The Auryns got their start in Germany, studying in Cologne with the Amadeus Quartet, and later at the University of Maryland with the Guarneri Quartet. They went on to win awards and are regular performers at many of the world's chamber music festivals.

In 2010, they'll take over the directorship of the Musiktage Mondsee festival near Salzburg. They've also spent time as members of the string faculty at the Musikhochschule in Detmold, Germany.