Accessibility links
In Pakistan, A Government Official-Turned-Protester Many thousands of people took part in the campaign to restore Pakistan's chief justice after he was ousted by the country's military ruler more than two years ago. But one man stood out amid that noisy throng of black-suited lawyers, civil activists and party cadres, who are now celebrating the judge's return to the bench: 85-year-old Roedad Khan. 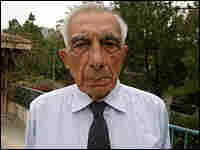 Roedad Khan was unlike other protesters who took to Pakistan's streets in support of ousted Supreme Court Justice Iftikhar Chaudhry: Khan used to be one of Pakistan's most senior government officials — and he is 85. Junaid Khan for NPR hide caption 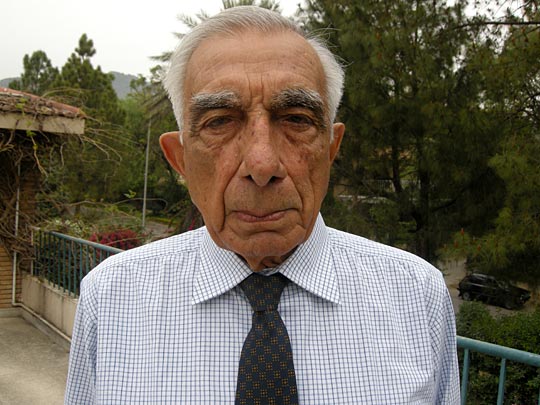 Roedad Khan was unlike other protesters who took to Pakistan's streets in support of ousted Supreme Court Justice Iftikhar Chaudhry: Khan used to be one of Pakistan's most senior government officials — and he is 85.

Many thousands of people took part in the campaign to restore Pakistan's chief justice after he was ousted by the country's military ruler, Gen. Pervez Musharraf, more than two years ago.

But one man in particular stood out amid that noisy throng of black-suited lawyers, civil activists and party cadres, who are now celebrating the judge's return to the bench.

Roedad Khan does not fit the stereotype of the fiery-eyed frontline protester, who took to Pakistan's streets for week after week, braving tear gas and baton-wielding police at the risk of arrest and injury.

He is a courtly, urbane and soft-spoken man who lives in an airy villa in the capital, Islamabad, surrounded by elegant furniture, oriental rugs and the biographies of history's leaders.

Khan used to be one of Pakistan's most senior government officials, serving in high office under civil leaders and military dictators.

For most of his career, he was a civil servant, although he came out of retirement for a stint as a federal minister. He has, over the years, been on personal terms with six of Pakistan's presidents.

When Musharraf first moved to oust Pakistan's chief justice, Iftikhar Chaudhry, in March 2007, Khan was outraged. Musharraf's move was widely seen as an attempt to get rid of an independent-minded chief judge who might block the general's reelection plans.

Chaudhry was also asking awkward questions about scores of Pakistanis secretly detained by the intelligence services, purportedly as part of a crackdown on Islamist extremism.

Musharraf later threw out dozens of other senior judges. Khan — who trained as a lawyer and served as a junior judge under British colonial rule — saw the general's move against Pakistan's judiciary as an attack on a crucial bastion of the state.

For months, Pakistan's lawyers mobilized, sometimes in large numbers, in a campaign that did much to bring about Musharraf's downfall. Khan was often in the thick of it. On one occasion he was injured by a rock.

As demonstrations gathered momentum, so did Khan's new career as a political activist. He was rarely absent from protests held in Islamabad. He developed a daily routine. He would swap his jacket and tie for a sweater and hockey trousers, and set off into the city.

"Every morning after breakfast I used to get in my car, and go all over Islamabad looking for demonstrations," he says. "I didn't want to miss any."

"I was looking for people who thought like me, felt like me. And I felt [these were] kindred souls, you see. And I felt very happy in their company."

Khan concedes that he is sometimes accused of double standards. Khan's critics point out he was a senior civil servant under previous military dictators, including General Zia ul-Haq, who undermined the principles of an independent judiciary and democracy.

"We were wrong," Khan says, sadly.

He adds: "An individual person giving up his job would not have made any difference. But I think this is a collective guilt. We should have said no to martial law, from the beginning, back in 1958."

After Musharraf left office, Khan was optimistic that the chief justice and other sacked judges would swiftly be restored.

The new president Asif Ali Zardari — Benazir Bhutto's widower — promised this in writing, but then proved reluctant to keep his word.

When the Supreme Court recently upheld a ban preventing the country's most popular opposition leader, Nawaz Sharif, from holding office, Pakistan was plunged into another political crisis, this time during a period of deepening instability.

The crisis was worsened by the federal government's decision to impose central rule on Punjab, the richest and most popular province; Sharif's brother was removed as chief minister.

Nawaz Sharif's supporters, and the nation's lawyer and civil activists, prepared to descend en masse on Islamabad, and Zardari was forced to relent.

Chief Justice Chaudhry finally resumed his place at the Supreme Court on March 24, amid celebrations by his supporters.

Khan says he is "ecstatic" about the judge's return. But he is also wary.

Despite his age, Khan says he is ready to take to the streets again if there is another attempt to subvert Pakistan's judiciary.

"You know, it's amazing," he says. "Sometimes, if you are passionately involved in a good cause, in a just cause, you draw upon your inner reserves of strength."