Accessibility links
Folklorist, Labor Activist Archie Green Dies Archie Green was a blue-collar worker and labor-union activist who became a teacher and helped start the American Folklife Center at the Library of Congress. The man who established "laborlore" as a field of study died Sunday at the age of 91. 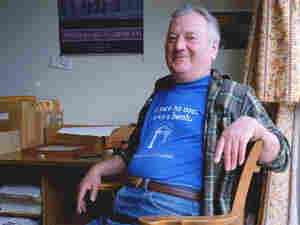 One of the pillars of American folklore has died. Archie Green was an author, teacher, folklorist and shipwright. He was also one of the driving forces behind the creation of the American Folklife Center at the Library of Congress. Green died Sunday at his home in San Francisco. He was 91.

Green moved comfortably through the halls of Congress and the halls of ivy, but he preferred life on scaffolding or in a welder's shed or machine shop. Work was where his heart was — doing it and convincing others to document what they did. He coined the term "laborlore" and actively encouraged filmmakers, steel workers and pile drivers, among many others, to keep the stories of working people alive.