Accessibility links
Tourist Dollars Saying Arrivederci To Italy Tourism in Italy dropped 25 percent in 2008 from the previous year and forecasts are even worse for 2009. The decline is not only affecting hotels and restaurants, but is also having an indirect impact on many other industries. 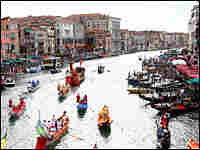 The Canal Grande during the Venice Historical Regatta in September 2008. Tourism to Italy is down 25 percent from last year. Vittorio Celotto/Getty Images hide caption 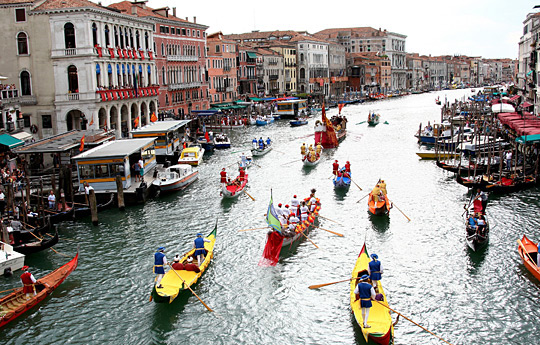 The Canal Grande during the Venice Historical Regatta in September 2008. Tourism to Italy is down 25 percent from last year.

Tourism dropped 25 percent in 2008 from the previous year — and forecasts are even worse for 2009. The decline affects not only hotels and restaurants, but has as indirect impact on many other industries as well.

Strolling through Rome is a feast for the eyes and mind. The city also offers an almost infinite number of bustling restaurants, cafes and pizzerias that can satisfy every sort of gastronomic whim. But over the last few months, there's been less and less bustle, and more and more empty tables.

"I used to have a lot of American customers and this time it is terrible," says Luigi Cancedda, who has run the Monte Arci restaurant near the Rome train station for 27 years.

"No more business. Yankees, where you are staying?" he asks. "No more Americans. I am very sad for that because they are so good and special customers."

Independent tour operator Giorgio Sansa says the crisis started about six months ago. "We have about 30 percent less bookings," he says. "Before we were working with buses with 40 to 45 people; now we have buses with 15 to 20 people — so that's the difference."

Italy is perhaps the cradle of modern tourism. Its ancient ruins and medieval and Renaissance artworks have attracted visitors for centuries. Writers such as Goethe, Stendhal and Henry James established the itineraries for the required educational Grand Tour. The post-war economic boom opened the country to the masses on package tours and to student backpackers on a dollar-a-day.

Today, tourism is the country's No. 1 industry, representing 10 percent of Italy's GDP. But now, the industry is undergoing its worst crisis in 60 years.

There are fewer and fewer tourists from Europe, Russia and Japan. But it's Americans who are most missed. Bank of Italy data show that the number of American visitors dropped from 2.5 million in 2006 to 1.75 million in the first nine months of last year, and since then the numbers have further plummeted.

Giovanni Bastianelli, director of Confturismo, a major tourism trade association, says, "What killed us is the dwindling number of American tourists. For cities like Rome, Florence, Venice and Milan, the No. 1 country is America."

In Venice, a low point was reached in December when American Express shut down its office. Bastianelli fears for the worst.

"When a place like Rome has to face such a huge drop in American visitors, the city trembles," he says.

American tourists have always been not only the most numerous, but they're also considered the biggest spenders. They take more taxis, and from an Italian perspective, they're more gastronomically adventurous than Europeans or Japanese. And more than any other nationality, Americans have always upheld the tradition of leaving tips.

'Tip Of The Iceberg'

Throughout Italy, 150,000 people dependent on tourism have already lost their jobs. Tour operator Giorgio Sansa says this is only the tip of the iceberg; the crisis, he says, is having a ripple effect on other industries.

"This has an impact especially on shops, leather shops in Florence, or fashion in Milan. I think these are the businesses which are going to suffer the most," he says.

But there is also an upside to the tourism decline. Big luxury hotels in the major tourist spots are being forced to cut their rates. It's now possible to book rooms — or even suites — usually reserved for Hollywood stars and millionaires.

But, don't expect to be treated like an international jetsetter. Many luxury hotels are not only cutting rates, they're also drastically eliminating many amenities — no more plush bathrobes, no more top-brand cleansing lotions, no more chocolates waiting by your bedside.