Accessibility links
The Skinny On Trans Fats While trans fats have been on the decrease in packaged foods, there's still no national regulation of these fats in restaurants. Trans fats not only increase levels of bad cholesterol that can block arteries but also bring down levels of the good cholesterol.

The Skinny On Trans Fats

The Skinny On Trans Fats 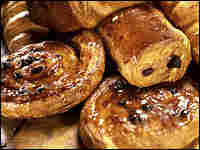 Unlike packaged foods, restaurants aren't required to label which kind of fats go into their food. If you live in an area that doesn't ban trans fats, the only way to know is to ask. iStockphoto.com hide caption

Trans fat in packaged foods has thinned considerably since a 2006 federal labeling requirement sent food producers scrambling to remove it from their products. But restaurants still don't have to say which kinds of fats they use — so those cookies, breads or french fries could be packed with trans fats. So far, 12 cities and counties — plus California and Puerto Rico — have banned trans fats in restaurants, affecting 20 percent of the U.S. population, according to the Center for Science in the Public Interest.

What it is: Trans fat is made when hydrogen is added to vegetable oil — a process invented in the late 19th century to help lengthen the shelf life of food products. Unlike other fats, trans fats are artificially created to turn liquid oils into solid fats, like shortening and hard margarine.

A small amount of trans fat is found naturally, primarily in some cow, goat and sheep-based foods. These naturally occurring trans fats are less harmful, according to studies in The American Journal of Clinical Nutrition.

Why it's bad for you: Partially hydrogenated oil not only raises the bad blood cholesterol, or LDL, but it actually lowers the good cholesterol (HDL). Even in moderation, trans fats can be harmful.

Where it's found: Products like cookies, crackers, vegetable shortenings and some margarines can contain trans fats, according to the Food and Drug Administration. Check food ingredient lists for the phrase "partially hydrogenated oil," which indicates the item contains some amount of trans fat. Beginning Jan. 1, 2006, all food manufacturers were required to label trans fat in their products.

Why it's on the wane in store-bought goods: After the FDA required food manufacturers to label their products, most companies quickly found a substitute for trans fat. And no matter which fat they use, it's not nearly as bad as trans fat, says the CSPI.

The good fats, such as those in olive, canola, soybean and corn oils, can help lower LDLs when consumed in moderation. Many manufacturers are switching to these unsaturated fats; just look for monounsaturated or polyunsaturated fats on the label.

Surprise! It's still in some store-bought products: If a label says a product has zero grams of trans fat, it's not necessarily true.

Under FDA regulations, "if the serving contains less than 0.5 gram [of trans fat], the content, when declared, shall be expressed as zero." Food products, such as crackers, could contain 0.49 grams of trans fat and not require a label. You can eat a serving of crackers (from five to 15 crackers, depending on brand) — and still get trans fat. Two servings that might seem to have 0 trans fat could actually have nearly a gram. And any amount of trans fat –- even in trace quantities -– can increase your chances of developing heart disease.

Waiter, is that a trans fat in my fry? When dining out or buying goods at a bakery, you won't know whether you're consuming trans fats unless you ask. And you won't really know unless you ask to see the label for the fat that restaurants choose for frying.