Accessibility links
Charlotte, N.C., Job Woes Go Beyond Banking Unemployment is up sharply, but people are still moving to the former banking boomtown. That makes life even tougher for Deborah Hadden. She's so afraid of losing her home, she'll take any job — even one paying half what she used to make. 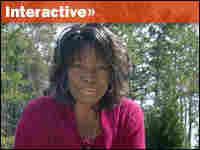 Charlotte, N.C., once an economic boomtown, has a 10.5 percent unemployment rate. Local economists predict that joblessness may reach as high as 13 percent by next year. That is much higher than the 7.2 percent in October, when Steve Inskeep first spoke with WFAE reporter Julie Rose.

Back then, the region had just learned that banking giant Wachovia, its second-largest employer at the time, had been bought by a competitor, Wells Fargo.

But Mark Vitner, an economist for Wachovia, says it's not just problems in the banking industry that have helped push unemployment up. "There are a thousand manufacturing plants [in the area]," he says. "Manufacturing will probably have more job losses than financial services."

Charlotte has had a diverse economy for years and has built a reputation as a good place to find a job. That reputation may be contributing to the high unemployment numbers. The city is still growing fast, and Vitner believes that many people who have lost their job in the region may be moving to the city to find work.

That's making the job hunt even tougher for Deborah Hadden. She lost her job as a buyer for an electronics store and recently attended a packed job fair, where 5,000 people showed up for just 500 openings.

Most of the jobs available pay less than half her previous wage, but Hadden is so afraid of losing her home, she says she'll take anything — even work paying $10 an hour.