Accessibility links
Trans Fat: When Zero Isn't Really Zero Many packaged baked goods and chips are labeled as having zero grams of trans fat, but FDA labeling rules allow for trace amounts per serving. Small doses of trans fat can add up if you eat lots of snack food. A better method? Read the label and avoid foods with partially hydrogenated oils. 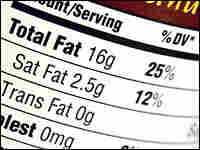 Labels are allowed to claim zero grams of trans fat if they have fewer than 0.49 grams, according to the FDA. To avoid even trace amounts of these harmful fats, don't eat foods with partially hydrogenated oils. iStockphoto.com hide caption

Get The Skinny On Trans Fats

Why is trans fat so bad for you? Which foods are common culprits? Click to learn more about this persistent fat.

Here's a question to challenge your nutrition literacy: How much trans fat is likely in a package of cookies that are labeled as having zero grams per serving?

"I would say zero!" said Joanna Robinson, of Washington, D.C., who was grocery shopping this week during her lunch break. "I'd trust the label."

But other shoppers were more skeptical. "More than zero," said Guy Powell.

How To Spot Trans Fat

The way to know if a packaged food contains trans fat is to scan the ingredient label for oils labeled as "partially hydrogenated."

Food manufacturers have relied on hydrogenated oils to add shelf life to products and also to make ingredients stick together better. The process of adding hydrogen molecules to vegetable oils makes them thicker.

Yet when Guy Powell checked the packaging of a box of chocolate chip cookies, he noted that the ingredient label listed a partially hydrogenated cottonseed oil.

There's a simple explanation as to why the cookies are labeled as having zero grams of trans fat per serving.

Kraft Foods, for example, reformulated many of its snack foods leading up to the 2006 regulations.

"A serving size of your classic, iconic Oreo cookies is three cookies," says Laurie Guzzinati, Kraft spokesperson. So if you're eating three cookies, you know you're not exceeding a half gram of trans fat.

Trans fats consumed at high enough levels have the triple whammy effect of increasing bad cholesterol, lowering good cholesterol and raising triglycerides — all of which contribute to the risk of heart disease.

Lots of consumers don't have any reason to worry about small amounts of trans fats left in processed foods. Especially people like Robinson, who doesn't eat many processed or fried foods.

"I prefer fresh vegetables and unprocessed foods" says Robinson. "So that's another reason I'm generally not concerned about this."

But for people who munch on a few snack foods a day, trans fats can add up incrementally.

Researchers have tested just how little trans fat it takes as a percentage of your overall calorie intake to do damage.

"They found that 3.8 percent of the calorie intake was sufficient to raise LDL," says Lynn Browne, professor of food science at Penn State University. LDL stands for low-density lipoproteins, a type of cholesterol considered bad for health.

So what's the chance a person would actually eat that much in a day? Well, it would take a serious cookie binge, like wolfing down a whole package of cookies.

But it's also the equivalent of an adult who has coffee cake in the morning, cookies with lunch and then some fries at dinner.

The good news is that across the board — from fast food chains to processed snack foods, trans fats have been reduced in the American food supply by more the 50 percent in the past several years.

"I think it's fair to give the whole food production system a pat on the back," says Michael Jacobson of the Center for Science in the Public Interest. "There's been a remarkable change."

But experts say people should keep reading labels, with an eye toward limiting partially hydrogenated oils.