Accessibility links
Democrat Conrad Faces Budget 'Nightmare' Kent Conrad, chairman of the Senate Budget Committee, is one of the first lawmakers to handle President Obama's proposed $3.6 trillion budget — which carries trillions of dollars in projected deficits. Conrad is working to cut out some of that debt. 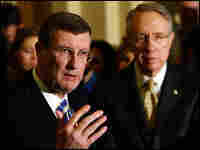 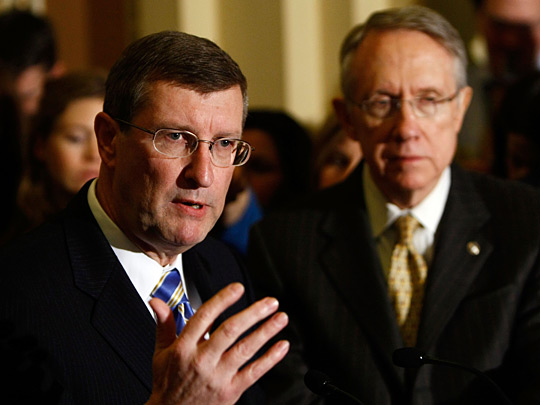 As the top Republican on the House Budget Committee, Rep. Paul Ryan will deliver the GOP's alternative to President Obama's budget next week. He says he believes the economic crisis is being used as an excuse to grow the size of the government.

Sen. Kent Conrad has been dividing his time recently between two disasters: one, economic; the other, the disastrous floods hitting his home state.

"We are fighting floods all over North Dakota — all of this being done in the midst of a blizzard that dumped 12 to 18 inches of snow in various parts of the state," he tells NPR's Steve Inskeep.

When asked if floods during a blizzard seemed like a metaphor for the budget situation in Washington, the Democrat replied, "Yes, it's my worst nightmare."

As chairman of the Senate Budget Committee, Conrad is one of the first lawmakers to handle President Obama's proposed $3.6 trillion budget — which carries trillions of dollars in projected deficits in the coming years. He says he wants to bring that budget under control.

"I believe very strongly that debts at the levels that are being projected now run very serious risks for this country," he says.

Conrad has denounced out-of-control budgets for years. But the Democrat wants to keep the president's biggest priorities — like fixing the economy and health care. And when Conrad released an adjusted plan this week, it still contained years of big deficits.

Still, Conrad says he has reduced the debt from Obama's plan.

"I've cut $608 billion from what the deficits would otherwise have been. These are real changes, not just my saying so, but scored by the Congressional Budget Office," he says.

Critics have said that some of those changes have to do with accounting — such as how something like the alternative minimum tax is factored in. But Conrad says there are areas in the budget where spending has been cut.

For example, in the first year, the budget provides $4 billion less than the president had advocated for foreign aid, he says. In addition, there's no funding for Obama's proposal to set aside $250 billion in additional money to assist in economic recovery for banks.

"We're not going to fund $125 billion over the next five years when there is no plan as to how to use the money and no assertion by the administration that they're even certain it would be needed," Conrad says. "You know, when you lose $2.3 trillion in a revenue forecast, we simply can't budget money for things that are theoretical."

But Conrad says it's still realistic for the president to pursue his key priorities, which include health care reform and changes in energy policy.

"In fact, we do embrace the president's priorities," Conrad says. "Reducing our dependence on foreign energy — that is critically important to America's economic future; excellence in education — if we're not the best educated, we're not going to be the most powerful for very long; and health care reform, which is the 800-pound gorilla. That is the thing that could swamp this boat. Because one in every six dollars in our economy is going for health care, so we must have health care reform. And the fourth thing the president asked me is to cut the deficit by more than half, which economists say will make the debt sustainable, and we do that in this budget. In the fifth year, we get to a deficit that is 2.9 percent of GDP, down from some 12 1/2 percent of GDP now."

Some Republicans have used the word "bankruptcy" when talking about what might happen if Obama's budget proposal were passed. But Conrad says that's not much of a possibility, "because governments can print money."

"We know the history. Governments can inflate their way out of debt, but that has consequences, doesn't it?" Conrad says. "What is a real threat is a precipitous decline in the value of the dollar and the threat that would pose to the economic security of the country."