Accessibility links
Amadou And Mariam: Well Beyond Mali The self-billed "blind couple of Mali" have been recording since the '80s, but they've never stuck to one style. On Welcome to Mali, Amadou and Mariam absorb ideas from everywhere and sound like they're having a ball. 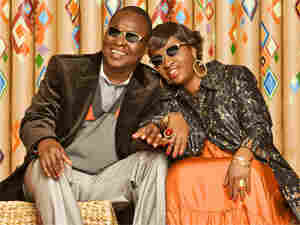 The self-billed "blind couple of Mali" have been recording since the '80s, and they've never been strictly Malian about it. Amadou and Mariam's 1999 song "Chantez-Chantez" features the duo singing in unison, which is atypical for them; they usually split the vocals. But the thick, rock-ish tone of husband Amadou Bagayoko'a guitar is almost a signature. And then there's the underlying riff, the kind of bluesy thing you think you've heard before — for good reason.

I couldn't swear that Amadou and Mariam copped that riff from Stevie Wonder's "Higher Ground" and wouldn't think less of them if they did. That's the way they've operated for a long time, and they're good at it — never better than on their brand-new Welcome to Mali.

The opening track is the very atypical, keyboard-dominated "Sabali." It's getting attention from alternative rock fans because it's produced by Damon Albarn of Blur and Gorillaz. One could say, "What's so African about that song? It's cheesy French electropop." And that's true — only it's terrific, even daring cheesy French electropop. Usually, African artists who flatter the Euro-American audience come off compromised. Amadou and Mariam absorb ideas from anywhere and sound like they're having a ball.

The Bambara words of that song are about buying on credit, which makes it one of the more specific tracks on the album. Amadou and Mariam are not great lyricists. As attractive as their worldly melodicism is, it's hard to imagine an English-speaking act getting away with generalizations as simplistic as, "Hypocrisy in politics, it's not good / We don't want any." But when we get to the heartfelt vows of "Compagnon de la Vie" ("Companion for Life"), I say Amadou and Mariam, together now for more than 30 years, have earned a pass.