Accessibility links
Scientists Race To Create Better TB Vaccine More than 1.7 million people died of tuberculosis in 2007, and that number is rising. The most widely used vaccine is 100 years old, and scientists say it's not up to the task of preventing the global spread of TB. 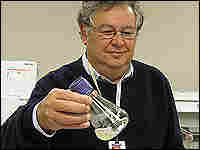 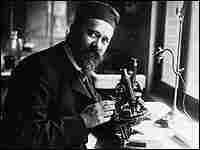 Albert Calmette, shown here in his lab in Lille, France, co-developed a TB vaccine that remains one of the most widely used vaccines in the world today. Bettmann/Corbis hide caption

Numbers At A Glance

Tuberculosis and HIV are a deadly combination. At least 1.7 million people died in 2007 from tuberculosis. A quarter of the people who died were also infected with HIV, according to a new report from the World Health Organization.

WHO also reports a slight increase in the global epidemic with 9.27 million new cases of TB worldwide in 2007. More than half of those occurred in Asia — mainly in India and China. A little under one-third of the new cases are in Africa, primarily in Nigeria and South Africa. Africa had the most cases of TB driven by the HIV epidemic.

"The likelihood of death for someone with HIV who becomes infected with TB that is not treated within six months is 100 percent," according to Dr. Richard Chaisson, the director of the Johns Hopkins Center for Tuberculosis Research. He noted that cases of TB have tripled in Africa since the growth of the HIV epidemic about 15 years ago.

In countries like Africa, India and the Russian Federation, tuberculosis is now often linked to HIV. Poorly treated tuberculosis is also giving rise to a drug-resistant and sometimes deadly form of the disease. — Brenda Wilson

Tuberculosis is growing increasingly resistant to the drugs that are now available to treat it, and the epidemic shows few signs of slowing in countries where HIV contributes to TB's spread. This puts an increased imperative on scientists to find better ways to control the disease, including by vaccine.

"At the moment, it is concentrated in mostly developing countries," says Dr. Barry Bloom of Harvard University School of Public Health.

But, he adds, infectious diseases do not respect national boundaries, and inevitably, TB will travel on airplanes and boats around the world.

"If we don't have a good vaccine to prevent TB in developing countries, we will be at as much risk in the industrialized world at a later time," he says.

There is a TB vaccine, called Bacillus Calmette-Guerin, or BCG, and it originated 100 years ago in the lab of two French scientists: Camille Guerin, a veterinarian, and Albert Calmette, a physician.

But BCG doesn't work very well and has long been a source of debate among scientists.

"It's a big mystery," says CEO Jerry Sadoff. "It is the world's most widely used vaccine — almost 100 million doses a year — and the world's least effective."

The vaccines being developed by Sadoff's company work on the same principle as BCG.

"The basic idea of a vaccine is to fool the body into thinking that it is infected so it can make an immune response. And it is not really infected. And then it remembers that," he says. So the next time the body encounters real TB, it recognizes that it has been infected before and it triggers an immune response.

By using molecular technology, immunology and genetics, Sadoff's team has made the BCG vaccine more potent and safer.

The vaccine had a tendency to hide in cell compartments, so genes were added to the vaccine that forced it out of its hiding place, allowing the immune system to recognize it.

There's another interesting trick to the TB bacterium: It can spend years dormant in the body, and then wake up. So Aeras added to the vaccine pieces, or antigens, of TB from various parts of the bacterium's life cycle. These antigens help the body recognize TB at all of its stages.

Part of the problem with the old BCG vaccine, Harvard's Bloom says, is that it was made from a cow bacillus and is missing key proteins that are present in human strains of the bacillus.

In the era leading to the development of BCG, a third of France was wiped out by tuberculosis. It was a dreaded disease in the 19th century, regarded as an almost certain death sentence.

"The experience in Paris was that [bovine] TB that people got by drinking milk was much more virulent in humans than TB that one caught from other patients," says Bloom. "That is what pasteurization has prevented in modern times. We heat milk and kill the TB bacillus."

It took the French scientists 13 years of testing in rats, mice and monkeys to turn the deadly cow bacillus into a form that was safe enough to test in humans. They then gave it to a child whose mother had died of TB and who was being taken care of by a grandmother who also had it. The child lived a long and healthy life, Bloom says. At the time, 30 percent of children who had a parent with TB usually died from the disease.

The old BCG is still used because it does confer some protection against the diesase in infants. But it has not been effective in preventing pulmonary tuberculosis in adults — the main source of the global TB pandemic.

But BCG works well among some populations and poorly among others, for a variety of reasons. For example, the same strain provides as much as 85 percent protection in England — and zero protection in India. There's speculation that other bacteria closely related to TB in warm climates produce a similar immune response — and therefore weaken the effectiveness of BCG. Also, some people may be more susceptible to tuberculosis for genetic reasons or because of poor nutrition.

Aeras is hoping that the vaccines it has under development will provide lifelong protection. "We have a regimen for infants and children when they live in very tight quarters where adults that have TB are coughing and spreading the disease," CEO Sadoff says.

There are other vaccines that will serve as a booster in adolescents and adults. It's now common practice with other vaccines, such as hepatitis B and tetanus, to administer them in childhood and later in life.

"I think what was unusual is trying to get a vaccine at birth that protects all the way through life," says Sadoff.

So far, tests conducted in animals that have been injected with TB indicate that Sadoff's recombinant vaccine and one of the boosters work better than the old BCG. Once safety tests are completed on human volunteers in the United States, Aeras will schedule clinical trials in countries with high levels of TB, such as South Africa and Kenya.

In the original Web version of this story, we stated incorrectly in the photo caption that the beaker held by Jerry Sadoff contained enough bacteria to make almost 3 million doses of a TB vaccine. The beaker contained enough bacteria for about 2 million doses. We also incorrectly stated that Aeras had already conducted safety tests of its new vaccines on human volunteers in the United States. Those human tests have not yet taken place. And a clarification: After publication, Aeras informed NPR that clinical trials are no longer scheduled for India.