Accessibility links
Bend's Highflying Economy Takes A Nose Dive Two years ago, the jobless rate in Bend, Ore., was at a record low, thanks to urban refugees drawn by the region's scenery and recreation. Now unemployment is at an all-time high, and workers are heading back to school to learn new skills in hopes that new jobs will appear.

The assembly line at Cessna's Bend, Ore., plant has had fewer planes under construction since the downturn in the global economy. Howard Berkes/NPR hide caption 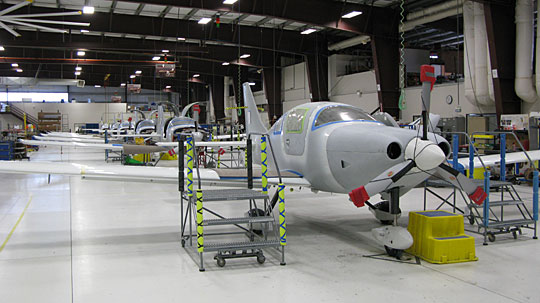 The assembly line at Cessna's Bend, Ore., plant has had fewer planes under construction since the downturn in the global economy.

In just 2 1/2 years, the unemployment rate (adjusted for seasonal layoffs) in Bend went from a record low 4.3 percent to a record high 12.6 percent, showing how quickly a boom can go bust. Lindsay Powell/NPR hide caption

In just 2 1/2 years, the unemployment rate (adjusted for seasonal layoffs) in Bend went from a record low 4.3 percent to a record high 12.6 percent, showing how quickly a boom can go bust. 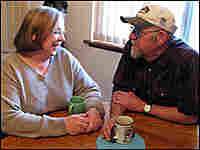 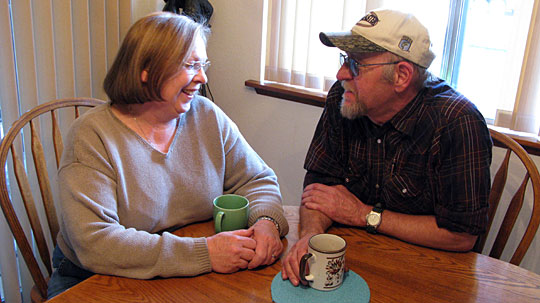 A survivor of recent layoffs at Cessna's Bend plant trims excess composite from a cowling destined to cover the engine of a new aircraft. This trim and drill shop is where Jay Swanzy worked until recently. Howard Berkes/NPR hide caption 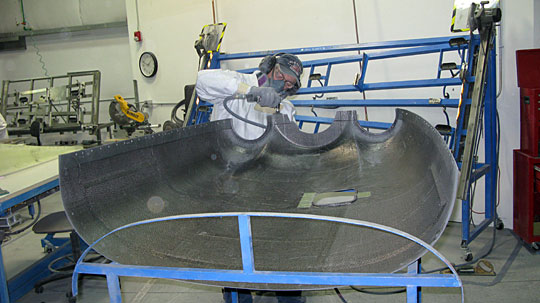 A survivor of recent layoffs at Cessna's Bend plant trims excess composite from a cowling destined to cover the engine of a new aircraft. This trim and drill shop is where Jay Swanzy worked until recently. 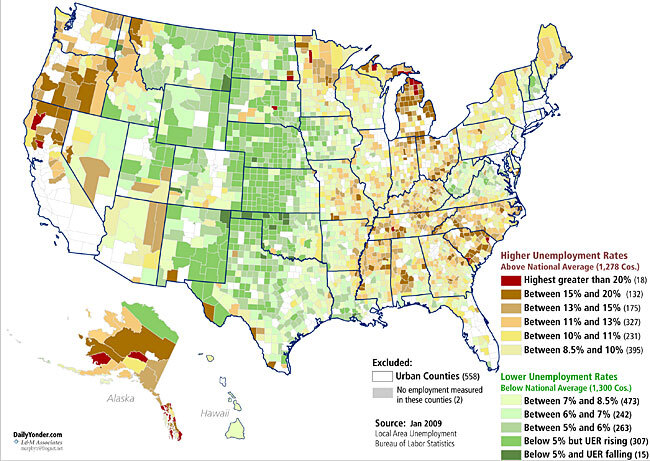 Two years ago, employers in Bend, Ore., were begging for workers.

"There were businesses that were cutting back on hours because they didn't have enough employees to staff the operation full time," recalls Steve Williams, an economist for the Oregon Employment Department.

Unemployment was at a record low, as the central Oregon city of 80,000 basked in the glow of being named one of America's best places to live. People moved there in droves, attracted by stunning mountain backdrops, a sunny high-desert climate, skiing, fly fishing, rock and mountain climbing, backpacking, river running and other outdoor fun.

Now, thousands are out of work and unemployment is at a record high.

"When you rise really quickly, you also can fall very quickly," Williams adds. "And I think that's what we're experiencing."

The plunge is blamed on the nation's chilled housing market and economic crisis. New figures show an unemployment rate for Bend of 12.6 percent (not including seasonal layoffs). That's three times the jobless rate at the height of Bend's boom and double what it was last year.

An Evolution Of Industries

The Bend bust transformed 56-year-old Jay Swanzy from working man to unemployment statistic. His layoff notice came in a sealed envelope given to him at work but left unopened until he handed it to his wife, Frankie.

This was in early February, less than a year after the closure of a woodworking mill ended Swanzy's 27 years as a millworker.

Wood products had once been the mainstay in the Bend economy. When Jay Swanzy was a kid, sons followed their fathers and grandfathers into the mills. But the industry has been declining for decades.

The mill closure turned out to be a good thing for Swanzy. His skill with fine detail work earned him a chance at an on-the-job training program at a Cessna aircraft manufacturing plant out by the Bend airport. Swanzy successfully transitioned from the past to the future as Cessna put him to work in the company's trim and drill shop.

'I Had Good Hopes For The Future'

"I felt it was really a good, stable place," Swanzy says. "They were putting a lot of investment in it. So I felt it was about as secure a job as I could get. I had good hopes for the future."

"Our sales people are quite busy," says Cessna spokesman Doug Oliver. "Our demonstration aircraft are quite busy. But because of uncertainty over the future of the economy, people are still a little hesitant to sign on the dotted line."

Aircraft buyers are also having difficulty getting financing, and some corporations are balking at plane purchases because of congressional and public finger-wagging over the use of corporate jets.

Swanzy has a simple explanation.

"The economy's just down so low, nobody's buying anything," he notes. "It's affecting everybody, from the guy buying a $5 cup of latte to a guy buying a $600,000 airplane. I mean, they're all being hit the same."

So, the sealed letter Swanzy brought home from work had been expected, but it was still unsettling news, as Frankie Swanzy recalls. "It was like your chest does fall to your stomach when you see that you're no longer employed." Then she adds with a sigh, "[He] didn't make it."

The Cessna plant in Bend is one of a half-dozen operations tied to the small-aircraft industry. Aircraft manufacturers and suppliers produced as many as 1,000 jobs at one time. And all that aircraft work is traced to Lance Neibauer, a transplanted Californian attracted to Bend by some of the same amenities that triggered the boom.

"No place is perfect, but this one is probably as close as you're going to get," Neibauer says, as he describes the skiing, fishing, rock climbing and horseback riding in the area.

Neibauer brought aircraft manufacturing to Bend in 1991 with a company that made airplane kits. He found the sunny climate perfect for test flights. And he was able to buy land next to a local airport that was willing to share a runway.

Later, he decided to build finished planes and started a company that eventually ended up in Cessna's hands.

Aircraft manufacturing is still a promising source of future jobs in Bend — which makes Swanzy's layoff even more painful.

The Stress Of Being Jobless

Being out of work "is a full-time job and a lot more stress," Swanzy says. "Now, you get up in the morning and you don't know what to do. Which is the right way to go, the wrong way to go?"

It's especially stressful for someone his age. At 56, Swanzy is too young to retire. And he wonders whether he can compete, "especially with so many things getting computerized. I didn't grow up with a computer like these kids did," he says. "I've got nieces and nephews and great-nieces and nephews that know more about a computer than I do. So there's no way I can go out in the market and compete with them."

But Swanzy is not surrendering to unemployment. He goes into the Oregon work force center in Bend, where he practices his fledgling computer skills and meets with employment counselor Bobbie Faust. She's bullish on Swanzy and lists the traits that make him a good prospect.

"He has a good work history. He has definable skills. He also has excellent references about his communication, his quality," Faust explains. "If there were manufacturing jobs open, he'd be there."

That's a big "if" in Bend right now, and Faust acknowledges the harsh reality. "This is a very, very tough job market. There are very, very few jobs advertised. It's going to be a difficult challenge for him."

Heading Back To School

After an assessment of skills and experience, Faust steers Swanzy to computer-aided design training at the local community college. Stimulus package funds and federal retraining programs will help with tuition, books and unemployment payments.

That seems a better bet than stimulus jobs slated for the region. They involve building roads and clearing fire-prone brush in nearby national forests.

That's unskilled and temporary work, says Carolyn Eagan, the central Oregon economist for the state's Employment Department. "It may be very short term," she adds. "What we may see is six months of jobs, and then they'll be gone again in October."

So Swanzy is planning to take the computer-aided design classes and apply for federal assistance.

"It sounds promising in the long run," he says. "I know it's going to be a rough go for a while. I've got to look long road, not immediately, to get something going. So it sounded good."

Jay and Frankie Swanzy believe they'll stay solvent at least through the summer, with the help of Frankie's paycheck, her medical insurance, a refinanced mortgage and unemployment checks.

Economist Williams suggests it may be a while before Bend recovers and restores the promise of its economic boom.

"I don't believe we've hit the bottom yet," Williams says. "So, in the short term, we'll definitely see some more hard times ahead."