Accessibility links
Rockabilly's Wanda Jackson Hits Hall Of Fame On Apr. 4, the rockabilly legend behind "Hard Headed Woman" will be inducted into the Rock and Roll Hall of Fame in the Early Influence category. It's her hard head in the music business that's helped make her both a survivor and a pioneer. 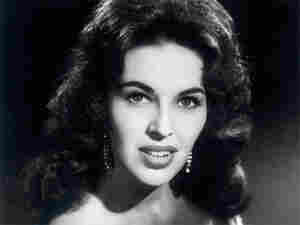 The Grand Lady of Rock 'n' Roll will be inducted alongside Spooner Oldham, Run-D.M.C., Bobby Womack and more at the Rock and Roll Hall of Fame. Courtesy of the artist hide caption

On Apr. 4, rockabilly legend Wanda Jackson will be inducted into the Rock and Roll Hall of Fame in the Early Influence category. It's her hard head in the music business that's helped make her both a survivor and a pioneer.

Jackson's induction has been a long time coming, and her song "Rockabilly Fever" even states her case: "We called it rockabilly before they called it rock 'n' roll."

"I'm just so grateful to him for believing in me and encouraging me to stretch myself," Jackson says. "I kept saying, 'Elvis, I'm just a country singer. I can't sing like you.' He said, 'Sure you can. You need to be doing it.' "

Presley also took the time to explain the music business to Jackson and her father. He said that in the past, musicians always aimed for an adult audience because they bought the records. But after working with Presley for a while, Jackson saw that kids were the ones buying the music.

One of Wanda Jackson's most popular songs also gave her a reputation she didn't quite expect. "Riot in Cell Block No. 9" was based on a story that Jackson had heard about a riot in a women's prison. But so many people assumed the original was about her that the 2003 version of the song -- recorded with psychobilly band The Cramps -- took her out of the equation. Still, Jackson admits that the "wild red bull" reputation fits her music just as well.

When interviewer Liane Hansen tells Jackson that she's most attached to her songs about heartbreak and "the man doin' you wrong," Jackson says she feels the same way.

"They're fun to sing," Jackson says. "I gotta take up for us gals, you know?"