Accessibility links
'Once' With Feeling: Small Musical Has a Big Heart John Carney's unpretentious musical romance is completely winning — with appealing characters, an unforced sense of intimacy and a light-fingered way of mixing music and story.

Listen
'Once' With Feeling: Small Musical Has a Big Heart 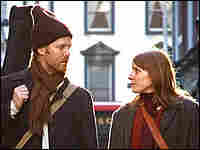 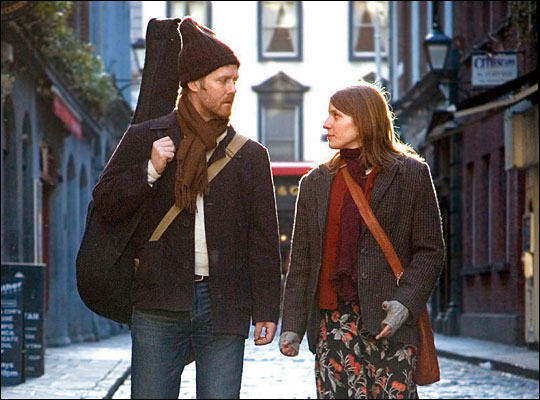 Glen Hansard and Marketa Irglova helped make Once a surprise hit at Sundance.

Watch Clips From 'Once'

Once is about to come into your life and make it whole. It's an unpretentious slice of musical, romantic enchantment that's low-key in concept but completely winning in execution. It's also the first film in years to mix music and story in the light-fingered way Richard Lester did in the faster-paced Beatles classics.

The pleasures of this film start with a ton of richly melodic music from Glen Hansard, lead singer of the Irish group The Frames, and Marketa Irglova, a young Czech musician he's collaborated with.

Filmmaker John Carney, himself a former member of The Frames, at first thought of using Hansard only for his songwriting skills. But at a certain point, he realized that the singer would be better than more-polished actors could be.

Both Hansard and Irglova (who was only 17 when "Once" was shot) bring an unforced intimacy to the film that is one of its strengths. To watch their characters interact is to eavesdrop on some of life's smallest but most valuable moments. We invest in these people completely, and they do not let us down.

Once opens with Hansard's nameless busker, or street musician, singing his heart out on the streets of Dublin. There he meets an equally nameless young woman who is also an impoverished musician. Naturally, they decide to make music together — and soon enough they start to regard each other with more than professional interest.

While all of this may sound obvious and forced, it doesn't play that way. This film's plot may be romantic, but it's modern enough to avoid playing out the way audiences will anticipate. The music is so satisfying and the characters so appealing that we believe this is all happening right in front of our eyes. We fall for each of these young people at the precise moment they are falling for each other — and what could be better than that?

The 'Once' and Future Musical 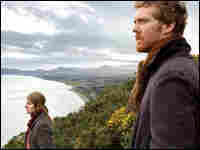 Marketa Irglova and Glen Hansard, in a scene from the movie Once. hide caption

Hansard is the lead singer of the Irish band The Frames. The Czech singer Irglova was only 17 when the movie was made — and neither of them are professional actors. In the film, their musicianship is an integral part of the plot, as the two compose lyrics and learn to harmonize.

Glen Hansard and his band The Frames released their first album, Another Love Song, in 1992. In most of the 15 years since, they have flirted with mainstream U.S. success without finding it, hopscotching from record label to record until gaining more traction — and fans.

Still, Hansard's greatest success in 2007 has been as an actor: Once was one of the surprise hits at this year's Sundance Film Festival. It begins rolling into theaters nationwide on May 16.

It is the first high-profile acting role for Hansard, 37, since his appearance in the 1991 film The Commitments. But it has finally put him on the pop-cultural radar as a rising star — after a mere decade and a half of trying.

The film arrives on the heels of the CD The Swell Season, a side project Hansard recorded with Irglova. It has received glowing reviews and led to a tour with Damien Rice.

Hansard and The Frames have also released The Cost, which has spawned a large-scale U.S. tour.